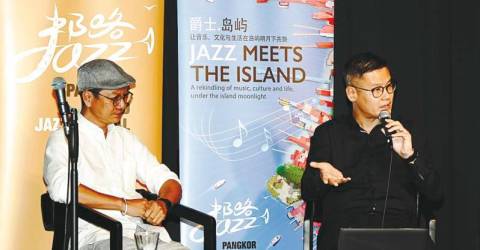 THE first ever Pangkor Island Jazz Festival will be held at Sungai Pinang Kecil, Pangkor Island, from Oct 7-9 this year. With the theme “Jazz Meets the Island”, the festival aims to provide a platform for local music artistes to showcase their talents and make live jazz accessible to the local community.

This three-day festival is organized by the Oriental Art & Cultural Association (OACA) to promote music appreciation and discourse through concerts, talks, and workshops. In a manner comparable to the well-known Pangkor Island Festival, the year 2022 promises to be a magnificent boost to the island’s tourism and local economy.

“We hope to create excitement for live jazz music among the local community and to also deepen conversations between artistes and aficionados by providing a platform for them to showcase their art during the festival,“ said festival director and OACA executive director Eric Ch’ng during a press conference at Titi Fusion in Sri Petaling.

Eric then added that “as islanders and tourists are still reeling in the effects of the pandemic, we chose music as a medium to bring people back to the island and experience a sense of normalcy through the festival.”

The first two concerts each have tickets available for purchase at a cost of RM100 per person, but the final concert will be a charity fundraising event, and admission will be via donation. Funds then will be contributed to the Island’s Music Development Fund.

In addition to the performances, there will be a number of workshops, sharing sessions, and showcases during the festival that will focus on topics such as Afro-Cuban percussion, the history and styles of the Chinese bamboo flute, acapella, and jazz scat vocal styles which will be conducted and performed by the many artistes during the festival.

The workshops and exhibitions, which will be presented at various sites to highlight the cultural and natural splendour of the island’s surroundings, are all accessible.

Aside from that, guests are also pleased to enjoy the two jazz-related exhibitions, Jazz x Heritage and the Terang Boelan Exhibition, in which the former celebrates jazz from notable island nations while the latter honours Malaysia’s national anthem.

“For a ferry schedule to the island as well as upcoming packages with hotels in conjunction with the festival, we will upload it on the social media account,” Eric said.

For more information, updates or inquiry on the festival, visit www.facebook.com/ PangkorIslandJazzFestival.