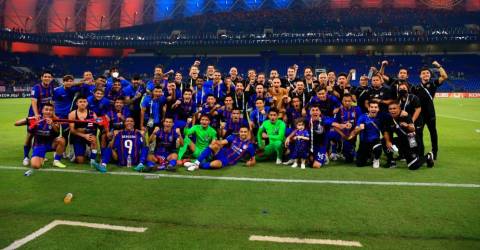 KUALA LUMPUR: The success of Johor Darul Ta’zim (JDT) in making history as the first Malaysian club to advance to the last 16 of the Asian Champions League (ACL), can serve as a catalyst for the morale of the national players to record more success internationally.

Football Association of Malaysia (FAM) president Datuk Hamidin Mohd Amin said the success, which put JDT on par with the best clubs from the continent, was also expected to serve as the best example to the country’s football arena.

“This success will indirectly improve the level of the game and quality of national football, to compete with clubs from Asian football superpowers,” he said in a statement today.

The Southern Tigers squad confirmed a slot into the ACL knockout stage as the Group I champions with 13 points, after beating Ulsan Hyundai 2-1 in the last group match at the Sultan Ibrahim Stadium, Iskandar Puteri, yesterday (April 30).

Hamidin said the success would be able to raise the spirits of JDT players to achieve more success in the next round.

“For sure it was a dramatic victory but quite stylish, proving the players are highly competitive,” he said.-Bernama