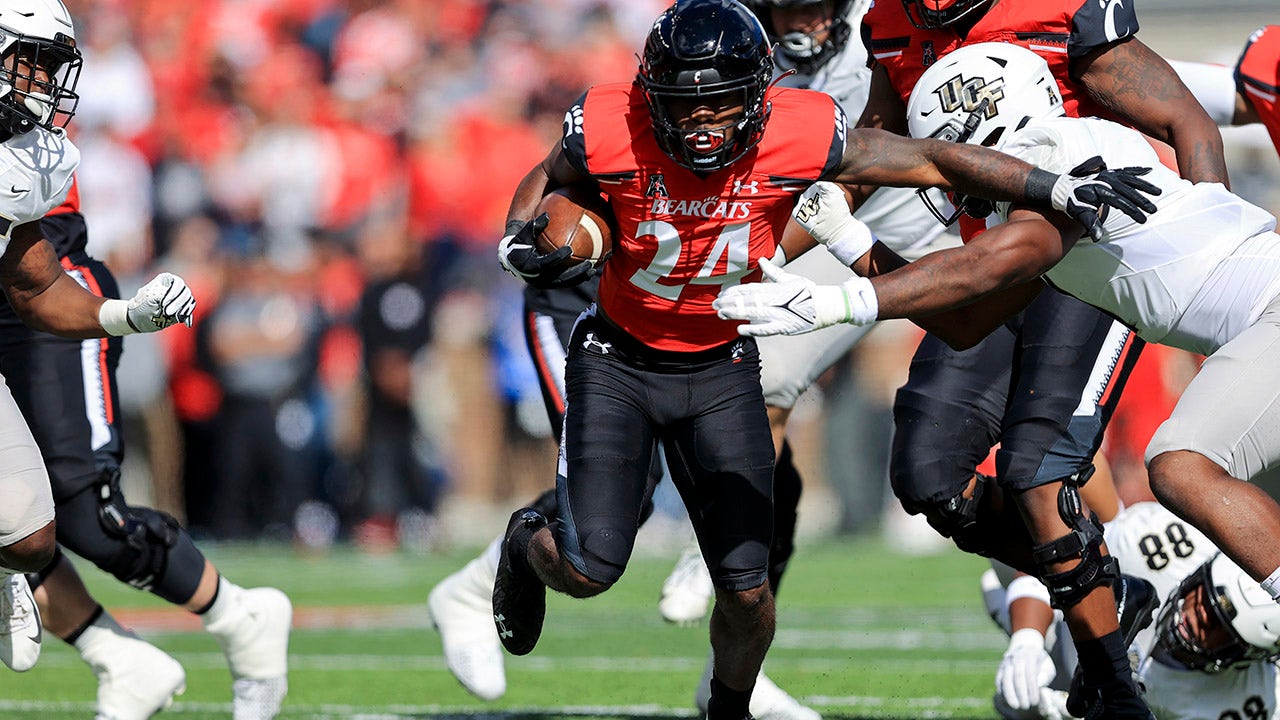 Jerome Ford rushed for a career-high 189 yards and four touchdowns, helping No. 3 Cincinnati roll past UCF 56-21 on Saturday.

Desmond Ridder passed for 140 yards and a touchdown as the Bearcats (6-0, 2-0 AAC) extended the nation’s second-longest home winning streak to 24 games.

Cincinnati’s special teams made the first big play when Josh Whyle partially blocked a punt to give the Bearcats the ball at the UCF 38. That led to a 1-yard TD run by Ford to put them ahead 7-0.

The all-time series was tied 3-3 coming in, with the Bearcats winning the previous two meetings by a combined six points. Saturday’s game wasn’t that close.

Ridder, who completed just six of his first 12 passes, hooked up with Alec Pierce in the back corner of the end zone for a 19-yard TD that put the Bearcats ahead 21-0 in the second quarter.

Ford, who ran for a then-career high 149 yards in last week’s win over Temple, sprinted 79 yards untouched for his third TD run to make it 28-0.

The 79-yard run matched his career-long against Georgia in last year’s Peach Bowl. Ford is the first Bearcats player with four rushing touchdowns since Isaiah Pead in 2010.

Freshman QB Mikey Keene who became UCF’s starter after Hawaii transfer Dillon Gabriel was lost for the season with a broken clavicle, passed for 141 yards and a touchdown with two interceptions for the Knights (3-3, 1-2).

Bearcats senior cornerback Coby Bryant ran back an interception 74 yards for a touchdown in the third quarter.

UCF: The Knights haven’t been able to overcome a myriad of injuries. In addition to Gabriel, they also were without junior defensive tackle Kalia Davis, who suffered a season-ending knee injury last week. Running backs R.J. Harvey and Isaiah Bowser and receiver Jaylon Robinson also are out.

Cincinnati: Coach Luke Fickell says he doesn’t care about style points, but with no marquee games left on the schedule, the Bearcats need to keep winning impressively and maybe get help from other teams if they are going to become the first team outside the Power Five to reach the College Football Playoff.

Cincinnati’s No. 3 ranking already is its highest ever. The Bearcats moved up two spots last week following losses by Penn State and Alabama. Their previous best was a No. 4 ranking in 2009 under head coach Brian Kelly.

Cincinnati: Plays at Navy on Oct. 23.