Two jet-setting brothers arrested by armed police in Thailand led a huge cocaine and ecstasy ring based in Wirral.

Joseph and Gregory Mulhare lived the high life, flying to Ibiza, Tenerife, France and America, thanks to massive drug plots.

The pair were today jailed for a total of 28 years at Liverpool Crown Court over plots said to have been worth ‘millions of pounds’.

The brothers and their gang were brought crashing down to earth thanks to a ‘supergrass’ – police informer Ronnie Bateman. 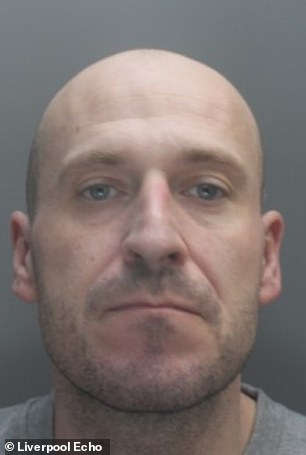 They were finally cornered by gun-wielding officers, who swooped in as they slept in hotel beds in November 2018.

Having spent more than a year at large, they voluntarily chose to return to the UK rather than remain in a squalid Thai prison. 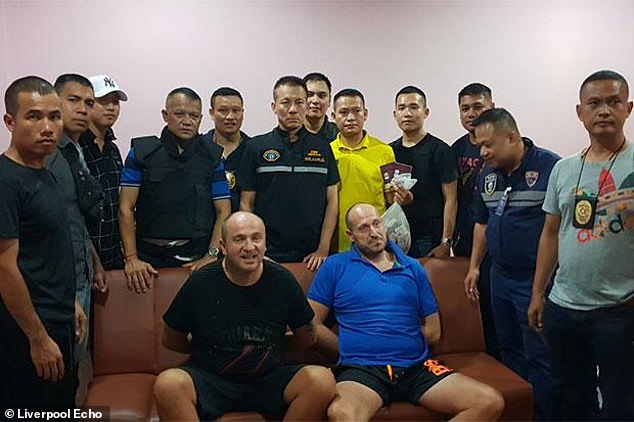 The brothers (centre) were finally cornered by gun-wielding officers, who swooped in as they slept in hotel beds in November 2018 in Thailand

Rather than get his hands dirty, he directed others to produce, store, collect and distribute drugs to gangs across England and Scotland.

Mr Unsworth said: ‘He was a formidable figure within the operation, acting under great secrecy, with a highly organised cell-like structure beneath him.  His members worked in a disciplined and ruthless fashion.

‘Millions of pounds would have been made and despite paying no income tax, Joseph Mulhare was able to spend huge amounts of time in mainland Spain, where he lived to a great extent, as well as travelling to Ibiza, Tenerife, Holland and America.’

Gregory Mulhare, 40, another father with two young children, also had a ‘leading role’ – beneath Joseph – but was more ‘hands on’. 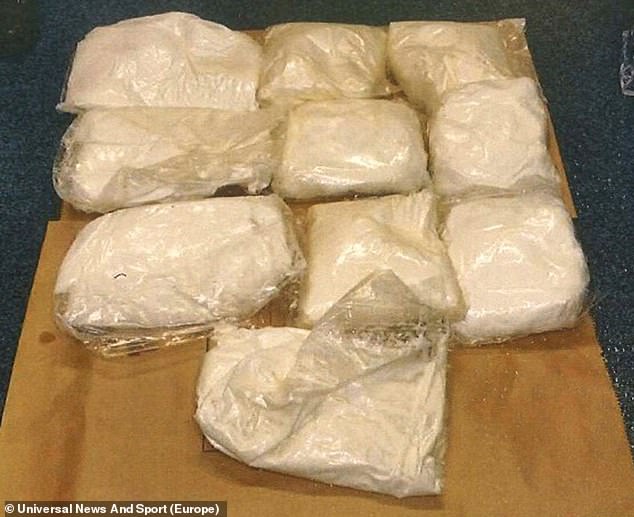 Officers from the North West Regional Organised Crime Unit (NWROCU) seized drugs worth more than £820,000, alongside £80,000 in cash and a stun gun, during the 18-month investigation

He had his own drivers and issued instructions, with phone records revealing significant contact between him and drug dealers.

Mr Unsworth said: ‘He had no registered form of income and in the five years prior to the main arrests he had not paid any tax to HMRC. He too travelled on numerous occasions to Spain, Tenerife and France.’

However, detectives believe they recovered only a fraction of the drugs trafficked and some 200,000 ecstasy tablets alone were manufactured, many of them from a machine hidden in the cellar of a property in Clifton Road, Birkenhead. 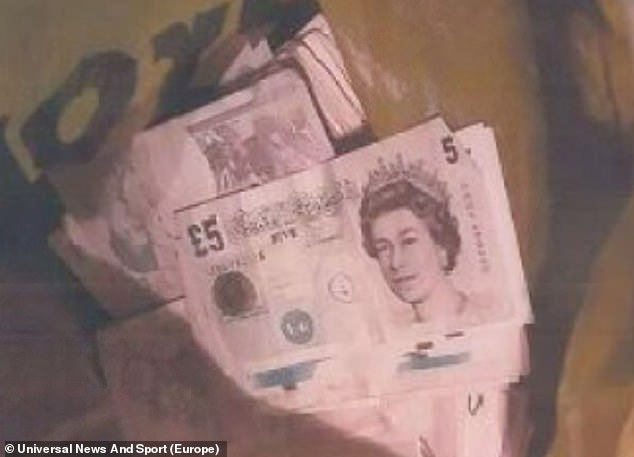 Officers uncovered cash (pictured) and a MDMA factory in a cellar in Birkenhead, Wirral

The brothers left the UK shortly before the others were arrested, Joseph in July and Gregory in September 2017, and met in Morocco.

Mr Unsworth said: ‘In December they flew from Casablanca to Phuket. They flew to Turkey in May and June 2018, which coincided with travel to Turkey by their partners.

Operation Manhattan was the police investigation into the racket spearheaded by Joseph, between December 2015 and September 2017. 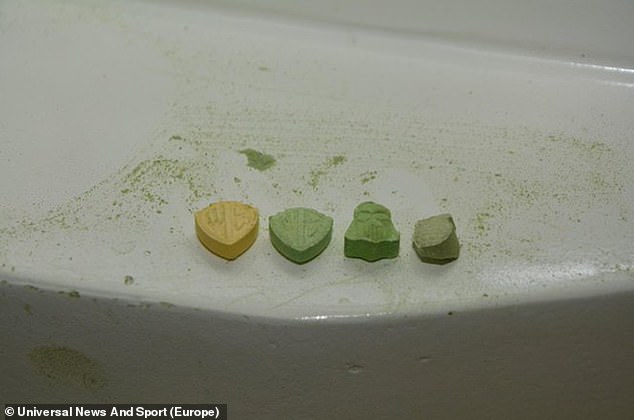 Inside the ecstasy producing drugs lab, uncovered in the cellar of a Birkenhead home in Wirral

The gang’s vast shipments were ferried north to Scotland and south to Bristol, Milton Keynes, Swindon, Oxford and Weston-Super-Mare.

Mr Unsworth said: ‘This was not garden variety drug dealing… this was drug dealing on a substantial and extensive commercial scale.’ 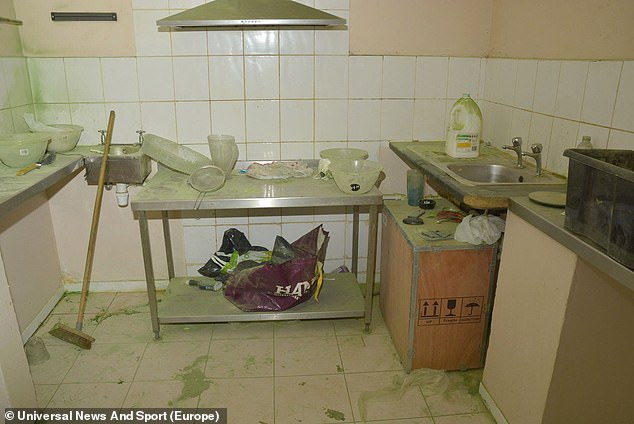 The gang’s vast shipments were ferried north to Scotland and south to Bristol, Milton Keynes, Swindon, Oxford and Weston-Super-Mare. Pictured: the factory in a cellar

Mr Unsworth said: ‘A conservative estimate would indicate that somewhere in the region of 150 trips were made by conspirators.’

But it was one courier, Bateman, 40, who confirmed detectives’ findings and revealed the gang’s inner workings.

Mr Unsworth said: ‘Ronnie Bateman provided a detailed account which confirmed much of what the investigation had identified, but also provided an additional peek behind the curtain into the day to day mechanics.

‘It was also clear from Ronnie Bateman’s evidence the extent to which secrets were kept, how protections against detection by law enforcement were put in place, and how deliberate divisions or cells would operate independently and with the knowledge of only those who needed to know.’

One driver, Gary Jones, was employed by Bateman to work on behalf of Joseph, with neither Jones nor Joseph’s knowledge, and Bateman acting as a ‘screen’ between them.

His evidence was they didn’t get on and wouldn’t have been happy to work with each other.

Mr Unsworth said: ‘Even though they were in fact in direct communication by PGP device, such was the professionalism and security measures they took, that neither in fact knew precisely who they were in contact with.’

Bateman revealed drivers were paid £1,000 per delivery, often bringing back cash, as Joseph didn’t want to pay for separate runs.

The informant referred to picking up five kilos of drugs on average but ‘a good few times’ 10 kilos and once 18 kilos of cocaine.

He even admitted sending cardboard boxes of drugs – packaged to look like eBay deliveries – with legitimate couriers, during his stunning confession.

Crucially, he said ‘Greg would have his own little empire going on but would also have to answer to Joseph’.

He said: ‘Joseph Mulhare is top of the tree. I never met anyone above Joseph but believe he had a boss in Spain.

‘Joseph told me what to do, no one else. I didn’t answer to his younger brother.’

Bateman, who had built up a £100,000 debt with the gang, said he concealed thousands of pounds by hiding it in a cooker.

He is subject to a Serious Organised Crime and Police Act 2005 agreement, which means he will get a substantial reduction in his sentence.

The brothers both admitted conspiring to supply cocaine, MDMA and amphetamine in England, while Joseph also admitted plots to supply those drugs and cannabis in Scotland.

Joseph has 14 past convictions for 30 offences, mainly dishonesty and driving matters, but only one for drugs – possessing MDMA – and hadn’t been convicted since 2010.

Gregory has eight previous convictions for eight offences, including possessing amphetamine, but hadn’t been convicted since 2008.

Oliver Cook, defending Gregory, said the drug plots marked ‘an exponential increase’ in the seriousness of his offending.

Judge Cummings said: ‘I’m sure the drugs actually seized in this case represent the tip of a much larger iceberg.’

He said Joseph was ‘at the apex of all of these conspiracies’ and jailed him for 15 years and four months, prompting tears from family sitting in the public gallery.

Gregory, who was jailed for 12 years and eight months, shouted ‘nice one, see youse all later’ and blew a kiss, as one woman replied: ‘Love you.’

Officers from the North West Regional Organised Crime Unit (NWROCU) undertook an 18-month investigation, which culminated in raids across Wirral as well as in Bristol and Milton Keynes in September 2017.

Speaking after the case, Detective Chief Inspector Ian Hussey, from NWROCU, said: ‘This has been a long and challenging investigation which has finally culminated in the two main ringleaders in a UK-wide drugs conspiracy finally being brought to justice.

‘Joseph and Gregory Mulhare were both responsible for masterminding the manufacture and distribution of both Class A and Class B drugs from their base in the Wirral.

‘Neither of these men were hands-on in the production of the drugs but they were responsible for orchestrating and organising the nationwide distribution, thus bringing misery to potentially thousands of people across the whole of the UK. They were also the ones who benefited the most financially from their illicit business dealings.

‘I am happy to see that these two men will now spend a considerable amount of time behind bars and that we have been able to stop a significant operation which was flooding the streets of the UK with Class A drugs.

‘I would like to thank the NWROCU police officers who worked so hard on this operation and our colleagues in Merseyside Police, Police Scotland and the Crown Prosecution Service for assisting and supporting us during this wide-ranging and ongoing investigation.

‘Our message to those involved in drug supply is that you cannot escape justice and there are no borders, we will work with other forces to relentlessly pursue those profiting from serious organised crime.

‘No-one should have to put up with drug dealing and the associated violence and gun crime it often brings.

‘We will continue to work with our communities to improve the quality of life for decent, law-abiding people and I would urge people to keep helping us do that by reporting any drug dealing or gun crime to the police or Crimestoppers anonymously on 0800 555 111.’