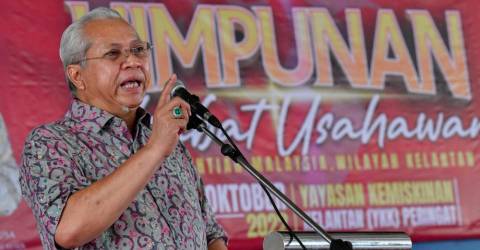 KOTA BHARU: The Special Task Force on Jihad Against Inflation will discuss several matters next week, in particular measures to overcome shortages of essential items during the flood season, its chairman Tan Sri Annuar Musa said.

Annuar, who is also Communications and Multimedia Minister said among the issues to be discussed in the meeting to be held in Putrajaya is the increase in egg prices and immediate steps to be taken to increase the production of food-related items.

“Preparations must be made and we feel that with the increasing value of the dollar, imports can put inflationary pressure on us.

“Entrepreneurs can increase production of food with elements of import subsidy and boost import substitution,” he told reporters after officiating at the Himpunan Usahawan Amanah Ikhtiar Malaysia (AIM) programme at the Kelantan Poverty Foundation (YKK) in Melor, here today.

Annuar said if the country is able to increase production of such items, it will be less dependent on imports.

“In addition, the intensive use of technology in agriculture, including ‘vertical farming’, can also be used and the use of the Internet of Things (IoT) in the agro-food sector can help deal with the lack of supply as well as the pressure of rising prices of goods.

“We are also assisting telecommunications companies to improve network quality so that entrepreneurs can apply IoT methods to increase production in the country immediately and widely,” he said. – Bernama