Jihadi John’s brother faces jail for £1,300 car parking scam after taking cash from drivers to raise entry barrier and keeping it for himself

Customer assistant Omar Emwazi, 26, took cash from drivers in south London He pleaded guilty to fraud but was bailed by Inner London Crown Court He will be sentenced on December 23 and judge warned him jail was an option

Customer assistant Omar Emwazi took cash from drivers to raise the entry barrier at an NCP car park in south London but kept the money for himself.

Dressed in a blue suit with no tie, the bearded 26-year-old appeared at Inner London Crown Court on Thursday, November 28 having only been released from prison the previous day after serving a sentence for a driving offence committed in September.

Customer assistant Omar Emwazil, 26, was bailed by Inner London Crown Court after pleading guilty to fraud and will be sentenced on December 23

He was also convicted of handling stolen bicycles in 2012 and was given a community order for 12 months, 100 hours of unpaid work and made to pay £800 prosecution costs.

In 2013 he was convicted of breaching a community order, then of driving while disqualified in June this year.

Emwazi was driven to Inner London Crown Court in a Mercedes Saloon by his heavily pregnant wife, having pleaded guilty at an earlier date. 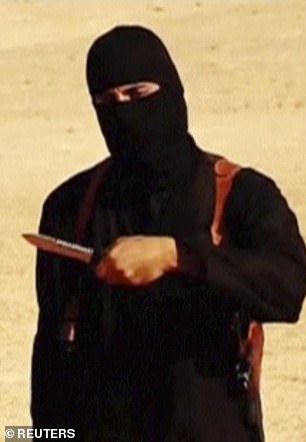 His brother, Mohammed Emwazi, also known as Jihadi John, was a member of a terrorist cell that beheaded hostages in Syria

After releasing him on unconditional bail, judge Nigel Seed QC said: ‘The fact that you will be released on bail at this stage does not mean you will not receive a custodial sentence.’

Emwazi’s wife is due to have labour induced on December 14, the court heard.

His brother, Mohammed Emwazi, was a member of the terrorist cell known as The Beatles and beheaded hostages in Syria.

He was bailed by Inner London Crown Court until December 23. The judge warned him jail was an option.