By Jack Elsom and Rory Tingle For Mailonline

Jo Swinson could be set to lose her seat after a disastrous showing for the Liberal Democrats and their anti-Brexit election campaign.

The party leader has a small majority of 5,339 in her Scottish seat of East Dunbartonshire – leaving her vulnerable to an SNP landslide which could see the party win a 55-seat landslide out of a total of 59.

A Lib Dem agent said: ‘It’s too early to know anything. We’ll need to get more data,’ they said. Another added: ‘It’s going to be a long night.’

The Lib Dems went into the election with 21 MPs, but are only set to return 13 to the House of Commons, according to a much-anticipated exit poll. 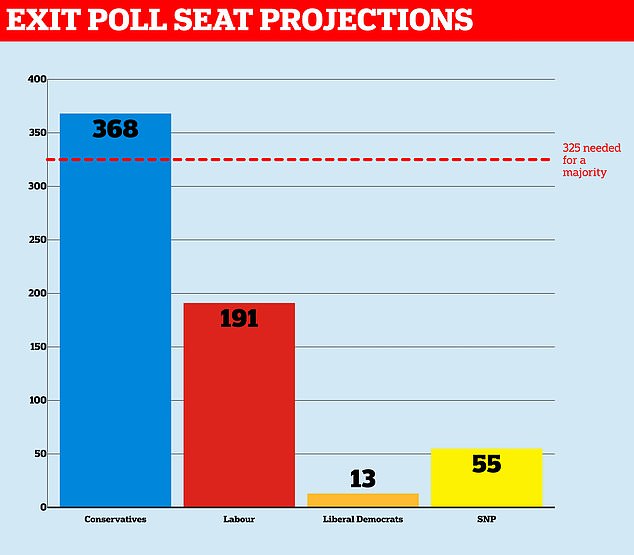 The party won 12 seats in 2017, but increased its tally by nine during the last Parliament as Labour and Conservative deserters were lured by Ms Swinson’s unashamedly Remain position.

But this pledge to cancel Brexit on day one of a Lib Dem government appears to prove a flop with voters, with the party continually sliding in the polls since the campaign began.

A remarkable climbdown from this committment has Ms Swinson’s campaign into disarray in the last few days, with the party making an eleventh-hour pivot to instead back a second referendum.

The exit poll predicted the Conservatives to win a thumping 86-seat majority with 368 MPs, with the Labour vote expected to collapse to return a woeful 191 seats.

The arch-Remainers were dealt a boost by brokering a pro-EU alliance with the Green and Plaid Cymru candidates standing aside for them in roughly 40 seats.

Tactical voting has been front and centre of this campaign, with polls suggesting 20 per cent of people were prepared to vote strategically going into Thursday’s ballot.

Pro-EU campaigners wargamed that a mere 40,000 Remain voters in some 30 marginal seats could deny the Tories a majority.

With buoyed chances of success following their pro-EU alliance, the Lib Dems have been pouring resources into southern constituencies which voted Remain.

Foreign Secretary Dominic Raab will be hoping he does not fall foul of this targeted effort which has been swamping his Remain Esher and Walton constituency with activists.

But Ms Swinson – once seen as the youthful leader who spearheaded the party’s surge in support to clinch second place in May’s EU elections – was ridiculed for billing herself as a ‘candidate for prime minister’.

Today Ms Swinson made a last-gasp appeal to her core base by pledging to block Britain’s exit from the EU. 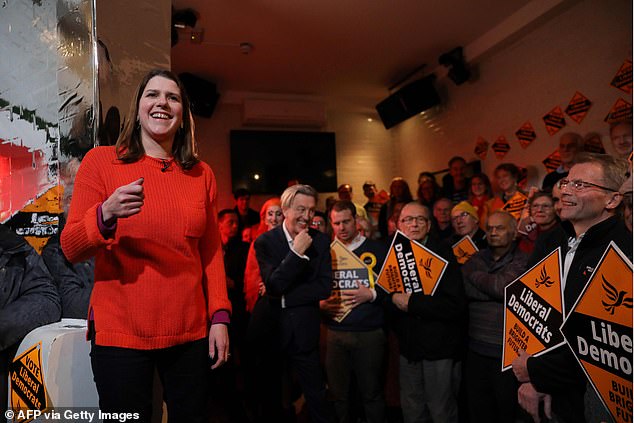 Jo Swinson’s party has continually slid in the polls throughout this campaign, with her policy to cancel Brexit on day one of a Liberal Democrat government seeming to flop with voters

She tweeted: ‘We are the strongest party of Remain, together we can stop Brexit and stop Boris for a brighter future.’

If Boris Johnson fails to edge a majority, Ms Swinson’s tally of MPs could still prove instrumental on deciding Britain’s next PM.

While the Lib Dem leader has refused to say if she would prop up one of the two main parties, her switch to back a fresh Brexit vote could see her strike an alliance with Jeremy Corbyn – who has also

As well as watching her her party performs nationally, Ms Swinson’s eye will also be on her own East Dunbartonshire constituency where she is facing stiff competition from the SNP.

The party fought back from near total wipeout in 2015 to gain seats in at the last election.