Jodie Chesney’s stepmother has relived the moment she had to tell the girl scout’s birth mother she was dead, and said that her marriage ‘crumbled’ under the weight of the 17-year-old’s murder.

Joanne, who helped raise the A-level student, called Jodie’s birth mother Clare after sending her a Facebook message at 4am asking her to get in touch as soon as possible.

Jodie was stabbed in the back while in Harold Hill, east London, with her boyfriend Eddie Coyle, 18, and friends in a case of mistaken identity.

She suffered a seven-inch deep wound that caused her lung to collapse and died on the way to hospital.

Svenson Ong-a-Kwie,19, and Arron Isaacs, 17, have been jailed for a total of more than 44 years for the murder.

Joanne Chesney, left, who helped raise A-level student Jodie, said she messaged her birth mother at 4am on Facebook asking her to get in touch as soon as possible. She had been out with her husband and Jodie’s father Peter, centre, to celebrate his 39th birthday 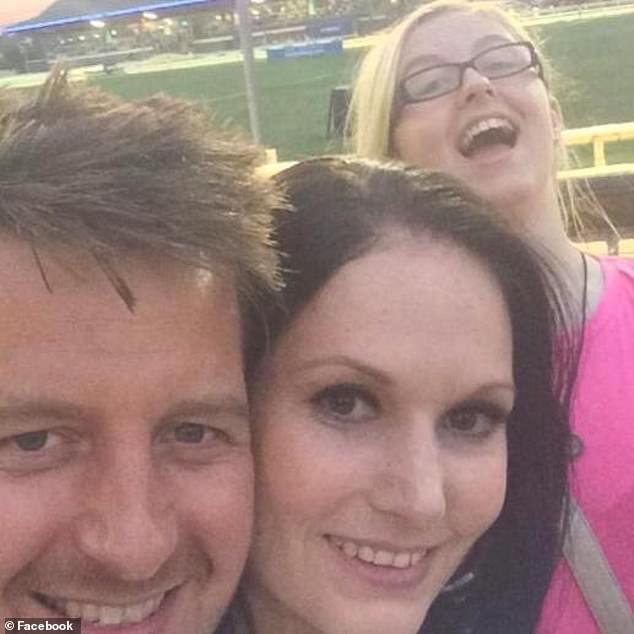 Joanne, centre, said that she first got through to Jodie’s birth mother’s sister before she was called by the birth mother in the morning. She is pictured with Peter and Jodie

Stepmother Joanne said she had never met Jodie’s birth mother before having to get in touch with her after husband Peter called her following a meal out to celebrate his 39th birthday.

‘I only had her details on Facebook so I sent her a message at around three or 4am after Jodie died asking her to get in touch as soon as she could,’ she told The Sun on Sunday.

‘I ended up reaching her sister first and explained what happened before Clare called me. It was a really hard phone call, particularly because we’d never met.

‘I had to tell her before it was suddenly in the news. We all just felt numb – it was one of the worst moments of our lives.’

The finance worker married Jodie’s father Peter in 2012, after meeting him when she was working as a barmaid in 2007, and lived with him, Jodie, his older daughter Lucy, 20, and a Yorkshire Terrier called Woody in their home in Dagenham, east London.

Her husband had split from Jodie’s mother when the student was just three years old. 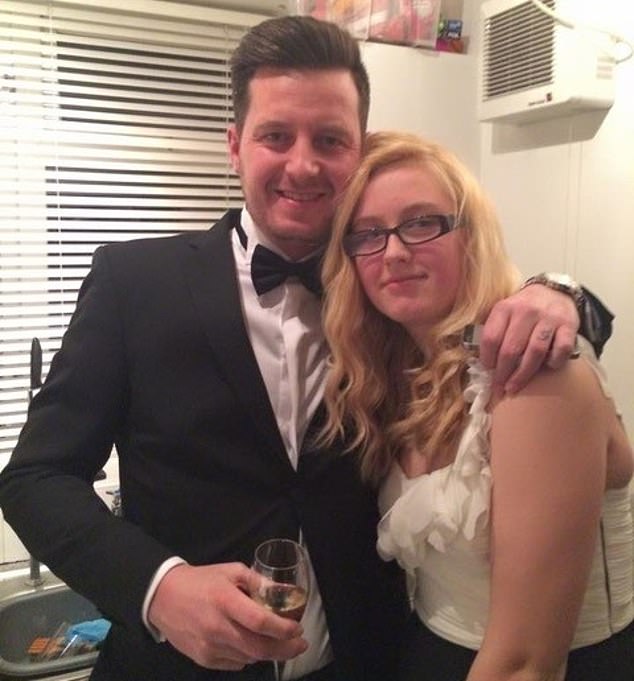 Joanne said her 12-year relationship with Peter, pictured with Jodie, collapsed as they started to ‘take out our grief on each other’ 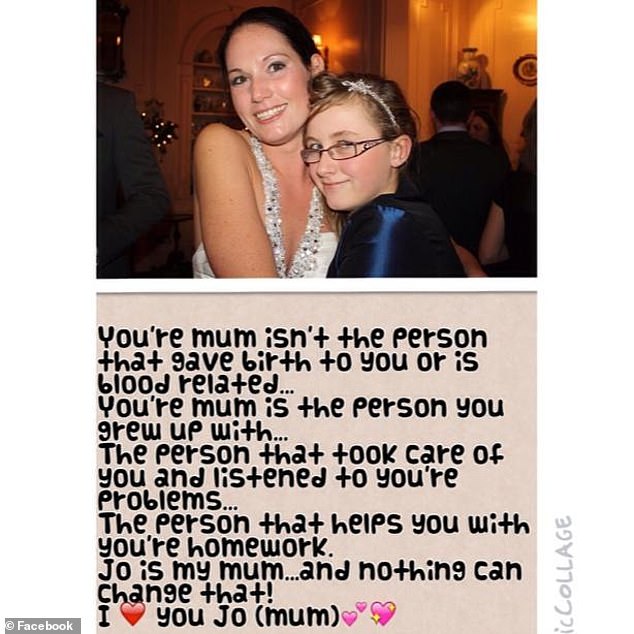 Joanne shared a strong bond with Jodie. On Mother’s Day in 2013 Jodie posted this heartfelt message to her

Jodie’s loss also caused her parents 12-year relationship to fall apart as she said they started ‘taking out our grief on each other’.

‘My way of coping was to go back to work and get back in the gym, to try to get back some kind of normality and routine, but Peter could barely get out of bed every day.

‘I wish I could have been strong enough to help him in the way he needed, but I couldn’t.

‘I think even the most rock solid of couples would have struggled to cope with a situation of this magnitude and, unfortunately, we just weren’t strong enough to get through it.’

A message Jodie posted on her Facebook on Mothers’ Day in 2013 reveals the depth of the relationship between the pair.

‘Your mum isn’t the person that gave birth to you or is blood related…’, she wrote. 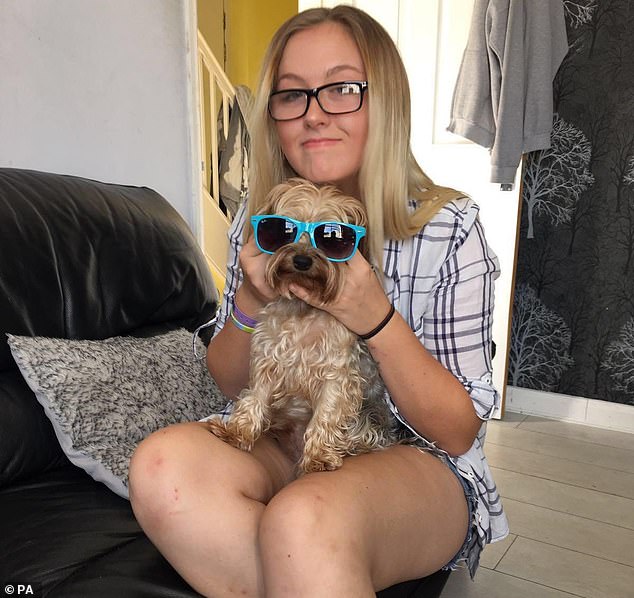 Jodie had been in Harold Hill, east London, with her 18-year-old boyfriend Eddie Coyle when she was stabbed in the back. She died on the way to hospital 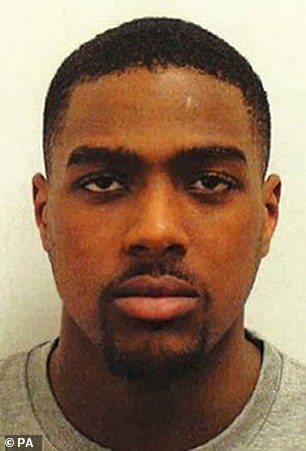 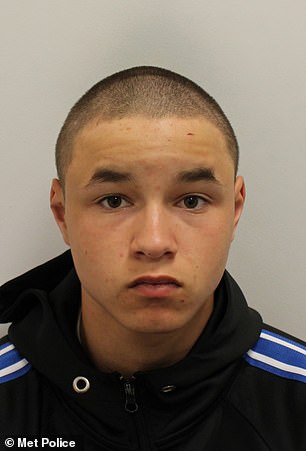 Svenson Ong-a-Kwie,19, and Arron Isaacs, 17, have been jailed for a total of more than 44 years for the murder.

Her attackers Ong-a-Kwie and Isaacs were unanimously found guilty of murder by a jury at the Old Bailey at the conclusion of a harrowing trial lasting more than four weeks.

The court heard that Jodie was targeted in a case of mistaken identity. Ong-a-Kwie, the knifeman, had wanted to ‘bang out’ a rival in revenge for stabbing him weeks earlier. But in the darkness, he lunged at Jodie.

After stabbing her the pair fled in a Vauxhall Corsa driven by Manuel Petrovic, 20. Petrovic and a 16-year-old passenger who cannot be named were cleared of murder and manslaughter.

In a tearful, emotionally charged interview, with The Mail On Sunday last month Peter laid bare the devastation that his daughter’s senseless murder had wrought on him and his family.

In the days after the murder, a picture of Jodie, smiling in her Scouts’ uniform at the door of No. 10 Downing Street, accompanied the news reports about a murder which shocked the nation. 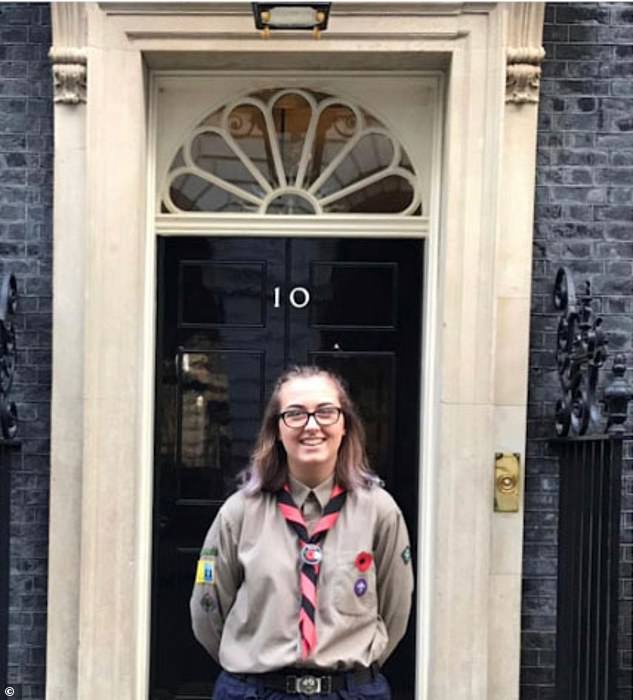 In the days after the murder, a picture of Jodie, smiling in her Scouts’ uniform at the door of No. 10 Downing Street, accompanied the news reports about a murder which shocked the nation

Her father says it is a photograph that is in perfect accord with Jodie’s personality — a sweet, kind girl, always ready to help others, whose life revolved around the Scouts.

He adds: ‘Jodie was very clingy as a child. My mum, Christine, Jodie’s grandma, became a mother figure. She used to call her every morning and every evening.’

Peter says that, as a child, his daughter suffered from a lack of self-confidence. ‘Growing up, she was painfully shy. But at primary school there was a teacher who really brought her out of her shell.’

‘She got involved with the Scouts and it became her life,’ says Peter. ‘She was always going off for the weekend doing stuff with them, mountain climbing and canoeing. The thing about Jodie is, she wasn’t an extrovert to whom this sort of thing came easily. She did it precisely because she was scared, to conquer her fears.

‘She loved being a Scout leader. She was a bit of a geek, she didn’t follow the crowd. There was one time when she went to Leeds Castle and she had to go on a rope bridge. She was frozen with fear, but she did it. She visited Downing Street, she went all over the place.’