‘Copperbottomed rubbish!’: John Bercow feuds with Nigel Farage about Brexit on Sky as the Brexit Party leader signals he will take a break from frontline politics

By Amie Gordon For Mailonline

John Bercow and Nigel Farage came to blows tonight as they exchanged views on the prospect of Brexit in the wake of the Conservative’s landslide victory.

The Brexit Party leader and former House of Commons speaker poked fun at one another on Sky News this evening as results flooded in from across the country.

Mr Farage, who spoiled his ballot paper, also revealed he intended to step down after his party was wiped out at the election.

While they both agreed that passing the Withdrawal Agreement was ‘not getting Brexit done’, Bercow slammed Farage’s argument as ‘absolute copperbottomed rubbish’.

And when Farage suggested the House of Lords and peerages were ‘outdated outrageous and wrong’, Mr Bercow jeered at his ‘Faragian principle’.

The former speaker said: ‘Nigel let me tease you – you spoke with seamless and undiluted eloquence in opposition to the use of patronage and you reference the House of Lords.

‘Therefore, I think we can take it from you at 2.12am in the morning that if you are offered a Peerage you will in fact turn it down as a matter of absolute and unbending Faragian principle?’

The Brexiteer then hit back as he joked the former speaker had ‘not even been offered one’.

The pair appeared on Sky News to discuss how Mr Johnson could ‘pivot’ on a very large majority.

As they joked it was ’embarrassing’ that they agree with one another on several points, Bercow told Farage: ‘I’m always willing to be obliging Nigel and to try to advance your own argument for you even if I think it is absolute copperbottomed rubbish.’

They also agreed that there could be a request to extend the transition period by 1 July 2020.

Mr Bercow, who stood down as Speaker at the end of October following a decade in the chair, said: ‘I hate to say so Nigel and I’m sure it’s embarrassing for you too, but I think we both agree about that.’

But Farage slammed the postal voting system which he said was ‘open to fraud and intimidation’ and ‘urgently needed to change’, as well as the House of Lords and peerages.

He said: ‘The ability of governments these days to use patronage in terms of peerages is outdated outrageous and wrong and I think that needs to change.

‘We’re going to need a written constitution because we now have a Supreme Court taking political decisions without any rule book to work from.

‘I’m a radical, I think British politics is living with a set of 19th century institutions that need to be brought into the 21st century – the problem is, it doesn’t suit a Conservative party with a big majority to do any of those things.’

Mr Bercow then teased him and challenged Mr Farage to say he would not accept a peerage if offered one.

Farage replied: ‘Well that’s the difference John, isn’t it? They wont even offer you one.

‘And they can keep trying to buy me off with one and I keep telling them I’m not for sale.’ 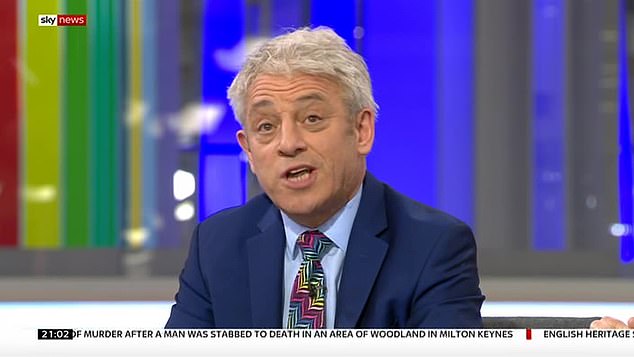 Mr Bercow also reignited his rift with Andrea Leadsom, accusing her of suffering ‘from the rather material disadvantage of being wrong’.

Mr Bercow, who has clashed with Business Secretary Ms Leadsom in the past, added that the former leader of the House ‘didn’t have a strong grasp of parliamentary procedure’.

He also said that he has never bullied anyone in his life, and had earlier said he would accept a peerage if he was offered one.

‘I’m not sitting awake at night worrying about it, I’m not losing sleep, it is not ultimately for me to decide, it’s for others to judge and I will have to rest content with whatever that outcome is,’ he said.

Mr Bercow added that whilst ‘none of us us without flaw’ and that ‘to err is human’, but that if he were to die tomorrow, he would ‘die happy’.

Mr Bercow also said that if he were to be made a peer, he would join the House of Lords as a crossbench peer, as is customary for a former speaker.