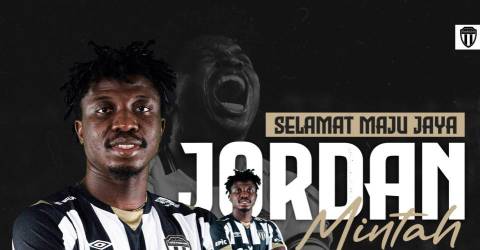 KUALA TERENGGANU: Rumours about the migration of prolific Terengganu FC ll (TFC ll) import striker Jordan Mintah to KL City FC have turned out to be true as the player will be joining The City Boys squad on loan.

Terengganu Football Club Sdn Bhd Chief Executive Officer, Ab Rasid Jusoh said the holder of the Premier League Golden Boot last season has been loaned out until the end of this season subject to several terms and conditions that have been agreed to by both parties.

“Among the terms and conditions agreed upon is that Mintah will not be allowed to play in matches against Terengganu FC (TFC) or TFC ll during the loan period.

“After the loan period ends on November 30, Mintah will be back with us (TFC ll) as his contract is still outstanding until 2023,“ he said in a media statement today.

Meanwhile, TFC ll coach Badrul Afzan Razali said the absence of their Ghanaian-born main striker will not only be felt by The Turtles squad but Terengganu football fans.

However, he was still happy because the player has the opportunity to play on a higher stage, namely the Super League and the AFC Cup.

“I admit Mintah’s absence will to some extent affect TFC ll. But we do not lack talented and potential local strikers to replace him.

“In fact, Mintah’s absence should be fully utilised by the young players to showcase their talent and get more playing minutes,” he said. – Bernama