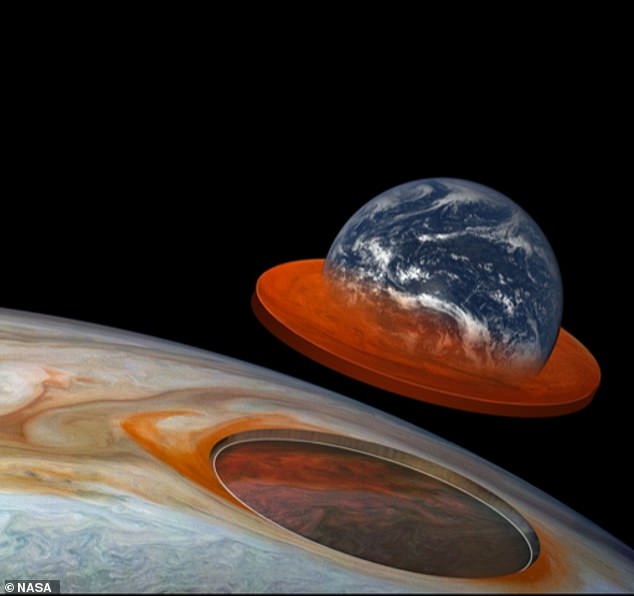 By Shivali Best For Mailonline


Jupiter’s Great Red Spot, a storm so big it could swallow Earth, extends surprisingly deep beneath the planet´s cloud tops, NASA has revealed.

The space agency’s Juno spacecraft has discovered that the monster storm, though shrinking, still has a depth of between 200 miles (350 kilometres) and 300 miles or so (500 kilometres).

When combined with its width of 10,000 miles (16,000 kilometres), the Great Red Spot resembles a fat pancake in new 3D images of the planet.

When combined with its width of 10,000 miles (16,000 kilometers), the Great Red Spot resembles a fat pancake in new 3D images of the planet

How big is the Great Red Spot?

Jupiter’s Great Red Spot is huge, and would dwarf Earth:

The mission’s lead scientist, Scott Bolton of Southwest Research Institute, said there might not be a hard cutoff at the bottom of the storm.

‘It probably fades out gradually and keeps going down,’ Mr Bolton said.

The research was published Thursday in the journal Science.

Thousands of storms rage across the gas giant at any given time – beautiful and colorful swirls, plumes and filaments covering the entire planet, as seen by the spacecraft’s camera.

Still ahead for Juno: measuring the depth of the polar cyclones, which might penetrate even deeper beneath the clouds.

‘I wouldn’t want to be too quick to guess that we’ve seen the deepest,’ Mr Bolton explained. 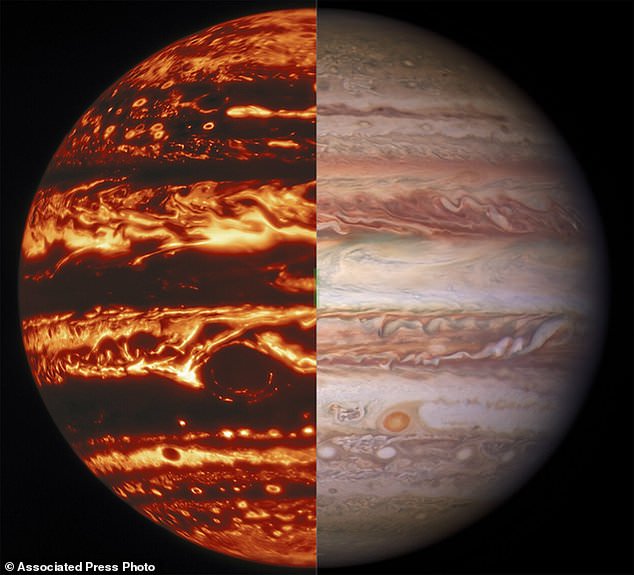 Jupiter’s Great Red Spot, a storm so big it could swallow Earth, extends surprisingly deep beneath the planet´s cloud tops, NASA has revealed. This combination of images provided by NASA on Thursday, Oct. 28, 2021 shows the planet Jupiter seen by the Juno probe’s microwave radiometer, left, and in visible light, captured by the Gemini Observatory

‘But the Great Red Spot is the largest and that makes it special by itself, and you might expect that it might be deeper just because of that.’

By contrast, some of the surrounding jet streams extend an estimated 2,000 miles (3,200 kilometres) into Jupiter.

‘Each paper sheds light on different aspects of the planet’s atmospheric processes – a wonderful example of how our internationally-diverse science teams strengthen understanding of our solar system.’

Juno entered Jupiter’s orbit in 2016, and has completed 37 passes of the planet to date.

‘Now, we’re starting to put all these individual pieces together and getting our first real understanding of how Jupiter’s beautiful and violent atmosphere works – in 3D.’

WHAT IS JUPITER’S GREAT RED SPOT?

Jupiter’s Great Red Spot is a giant oval of crimson-coloured clouds in Jupiter’s southern hemisphere that race counterclockwise around the oval’s perimeter.

The biggest storm in the solar system, it appears as a deep red orb surrounded by layers of pale yellow, orange and white.

Trapped between two jet streams, the Great Red Spot is an anticyclone swirling around a centre of high atmospheric pressure that makes it rotate in the opposite direction to hurricanes on Earth. 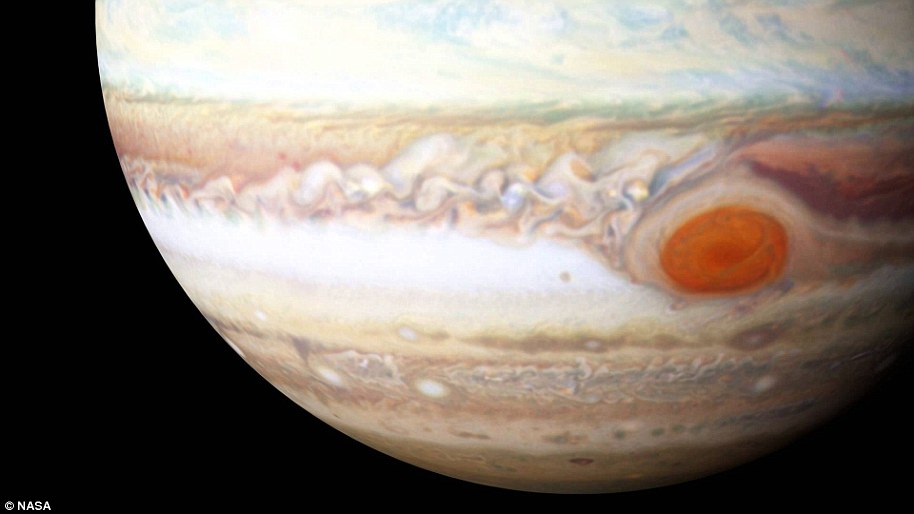 Winds inside the storm have been measured at several hundreds of miles per hour, with wind storms greater than any storm on Earth, Nasa astronomers have said.