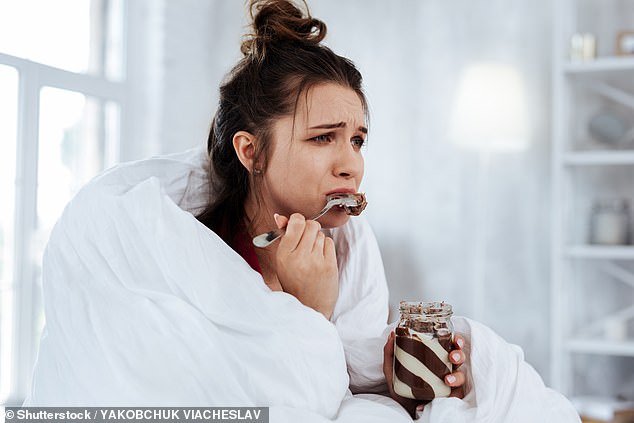 By James Heale For The Mail On Sunday

Sticking to your New Year resolutions can be difficult at the best of times.

But lockdown has made it even harder to maintain good intentions, it seems, with just one in four people keeping their pledges, according to a new survey.

Of those questioned in The Mail on Sunday’s poll, 69 per cent said the Covid crisis had made it harder for them to stick to their planned self-improvement.

The nationwide study of more than 1,200 people, conducted by Portland Communications, found that fewer than four in ten had bothered making any resolutions at all.

Of those who did, only 27 per cent had stuck to them all, with the rest quitting at least some of them within three weeks.

Almost two in five people (38 per cent) attempted to give up alcohol for ‘Dry January’, but more than six in ten have already cracked.

Asked if they were eating more takeaways or making other poor meal choices, 57 per cent of those polled confessed to eating less healthily than previously. However, the effects of lockdown aren’t all bad, with more than four in ten doing more exercise than normal.

Meanwhile, a separate study showed that 46 per cent of smokers were planning to kick the habit at the start of January – but more than two-thirds (68 per cent) had broken that commitment within the first week.

Dan Thomson, from e-cigarette company Juul Labs, which commissioned the poll, said: ‘January is traditionally a time when smokers try to give up the habit but our research has shown that seven in ten smokers who have tried to quit have already resumed smoking, and over half are now smoking more than previously.

‘Working from home has potentially brought many advantages – including a better work/life balance – but has also made it far easier for employees to slip into old habits.’