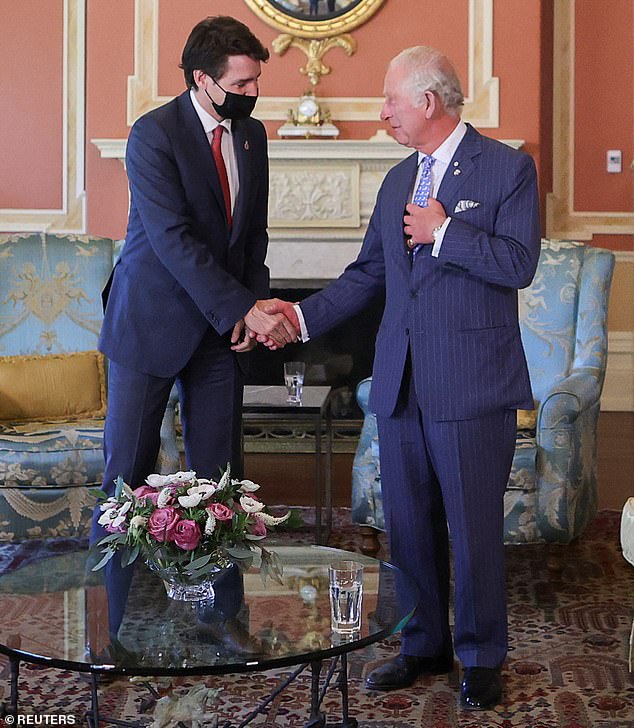 Canadian Prime Minister Justin Trudeau set an example for the Canadian public by wearing a face mask for a meeting with Prince Charles in Ottawa today.

Mr Trudeau hosted Charles at Rideau Hall, the official residence of the Governor General, saying it was a ‘pleasure’ to welcome the royal couple to the country.

The Canadian Prime Minister wore a black face mask as he shook hands with Prince Charles but removed it minutes later when they took their seats.

He also wore the face mask to walk down a corridor but removed it again to take part in a roundtable discussion on the environment. 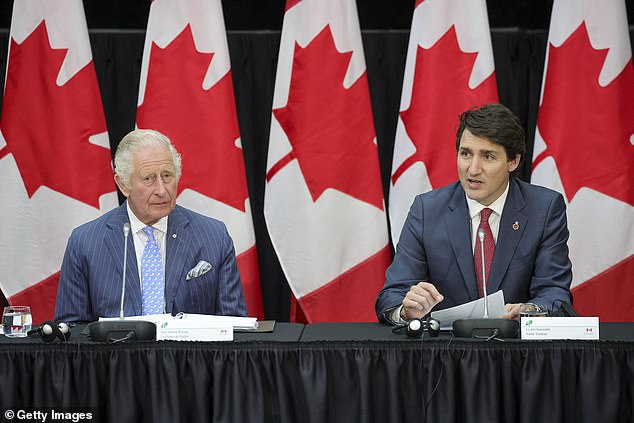 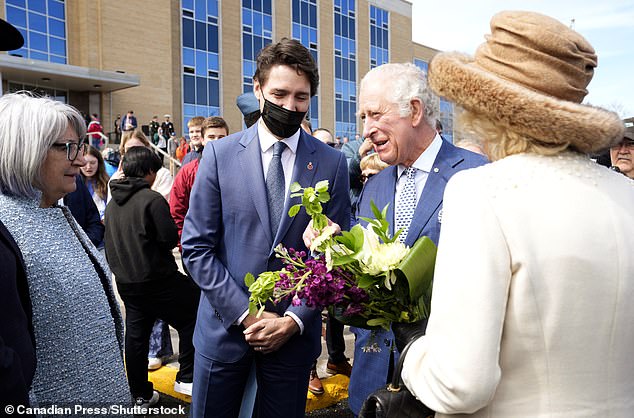 Yesterday Mr Trudeau wore a face mask as he welcomed Charles and Camilla to St John’s, Newfoundland and Labrador 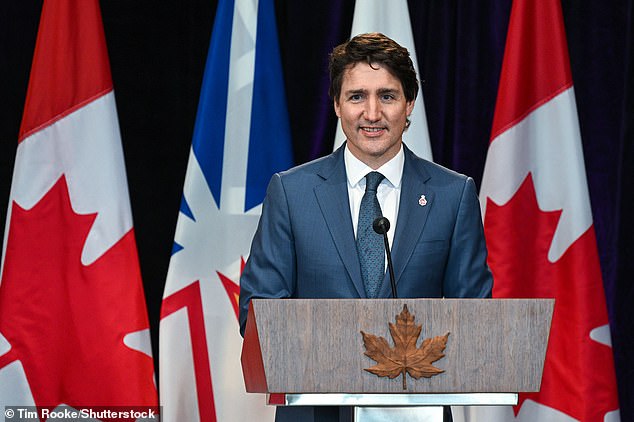 Prince Charles did not wear a mask.

Federal government employees are still asked to wear masks at work but only in settings in which social distancing cannot be maintained, such as in lifts or staircases.

Masks are no longer mandatory in many indoor public spaces in Canada but are still recommended by the Public Health Agency of Canada.

Mr Trudeau wore a face mask outside when he met Prince Charles and the Duchess of Cornwall shortly after their arrival in Newfoundland and Labrador yesterday.

Again, he removed it shortly afterwards to deliver a speech at the official welcome ceremony.

Prince Charles and the Duchess of Cornwall have met a number of dignitaries, local leaders and members of the public indoors during their time in Canada and only a handful have worn masks. 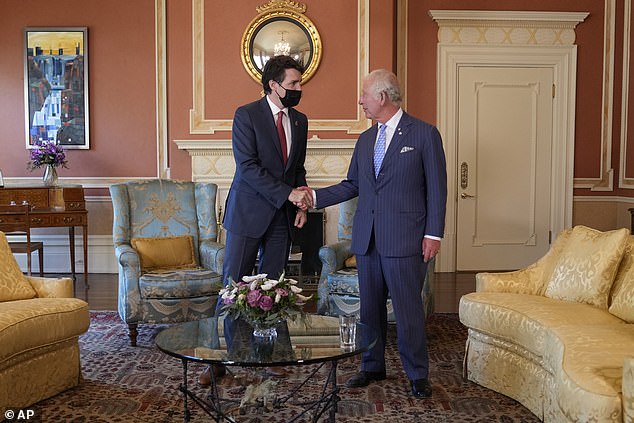 Mr Trudeau hosted Charles at Rideau Hall, the official residence of the Governor General, saying it was a ‘pleasure’ to welcome the royal couple to the country. He wore a mask as they shook hands 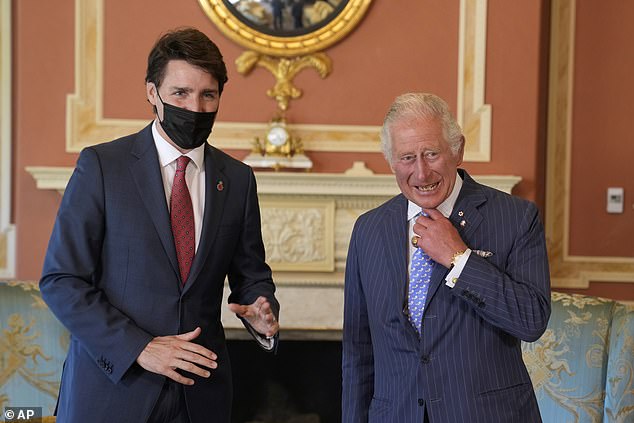 Mr Trudeau spoke of how much he was looking forward to discussing climate change with Prince Charles, among other issues. Masks are recommended but not mandatory in many indoor public spaces in Canada 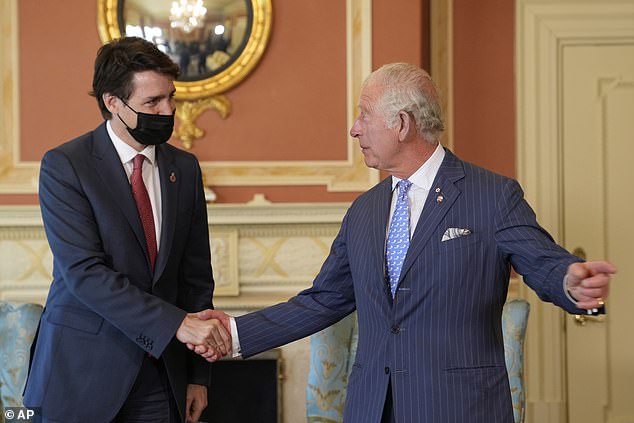 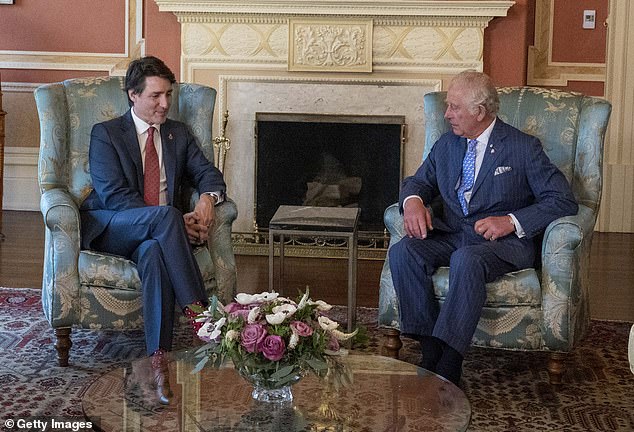 Mr Trudeau said it was a ‘pleasure’ to welcome Prince Charles and the Duchess of Cornwall to Canada.

He said: ‘I just want to say what a pleasure it is to welcome Your Royal Highness to Ottawa. I nearly need not introduce the place to you, you have been here so many times over the many years and decades.

‘It’s wonderful to be able to sit down with you to talk about so many things that are going on in Canada and continue the work that you have been doing on the environment and so many different issues that matter. It’s a real pleasure to welcome you here.’ 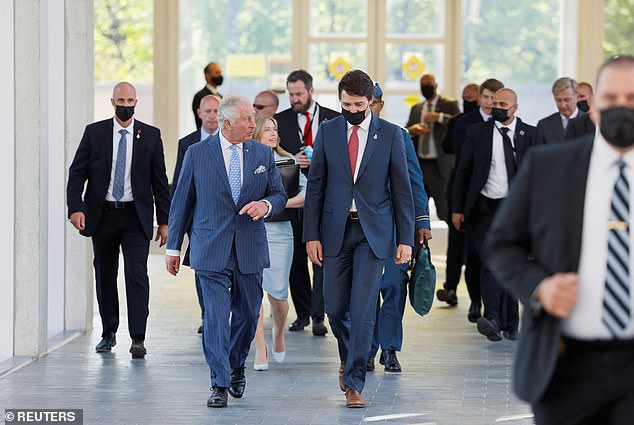 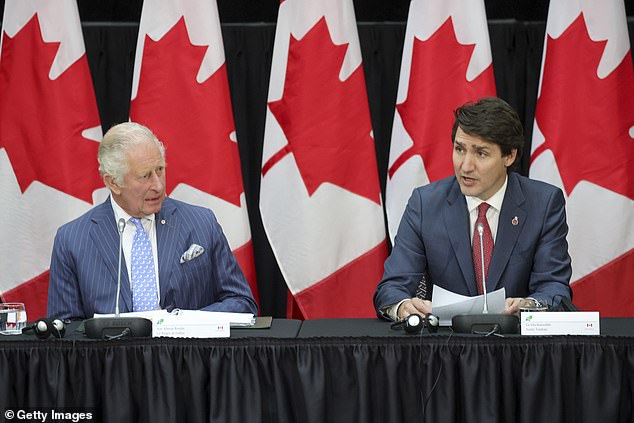 The Canadian Prime Minister removed the mask for the roundtable discussion

After Mr Trudeau repeated his words of welcome in French, the prince replied, off the cuff, in perfect French.

He then said in English: ‘Apart from anything else it is always a joy to come to Canada. And we seem to have coincided with some quite nice weather for a change.

‘We have met all sorts of people and I must say I am so full of admiration for the Canadian approach to welcoming so many people who are displaced from all these conflict-ridden parts of the world, and we have met quite a few today.

‘And your generosity as a government, but also so many communities and individuals have sponsored refugees, it is remarkable how welcoming everyone was. So thank you, truly for being able to visit this enormous country in some small parts.’ 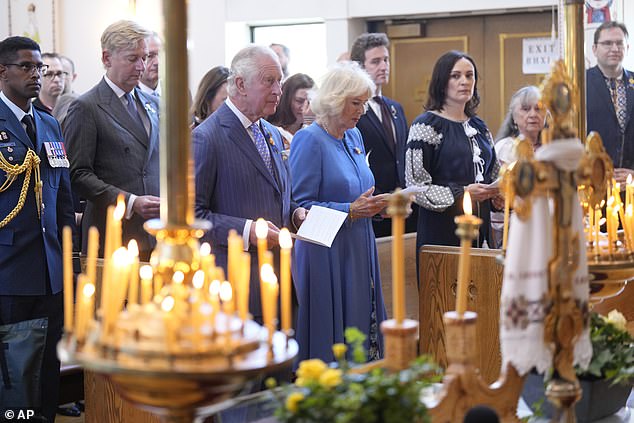 The meeting was held in the opulently-furnished Large Drawing Room at Rideau Hall, which serves as a formal gathering room for guests both before and after events.

The room is also used to entertain visiting Heads of State and their suite.

During the Victorian era, women retired to the Large Drawing Room where they would take tea, sew, play music and embroider. It was also here that the family would receive guests.

The artwork chosen to embellish its walls are all created by Canadian women.

The Prince of Wales has previously met Prime Minister Trudeau on several occasions including at COP26 and G7 last year.