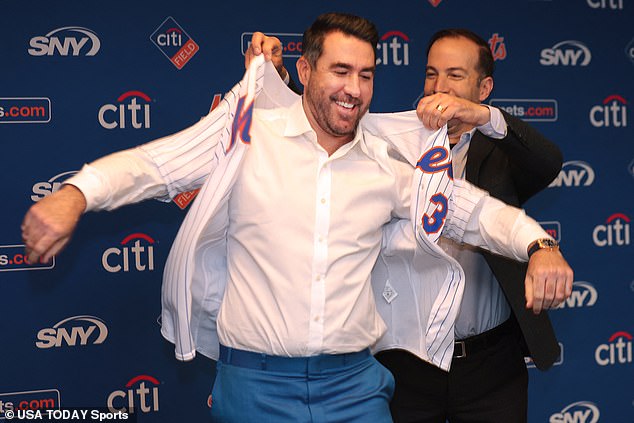 Justin Verlander is unveiled by the Mets after agreeing HUGE $86.7m, two-year deal in New York in the wake of World Series win… as model wife Kate Upton watches on with their four-year-old daughter from the front row

By Ben Nagle For Dailymail.Com and Associated Press Reporter

Justin Verlander was cheered on by his model wife Kate Upton and their four-year-old daughter Genevieve as he was unveiled by the New York Mets on Tuesday.

Verlander, 39, agreed to an $86.7million, two-year contract on December 5, and put on his No. 35 jersey for the first time at a press conference at Citi Field today.

Upton, 30, sat in a front-row seat for the event wearing a purple pantsuit, with their daughter Genevieve on her lap. 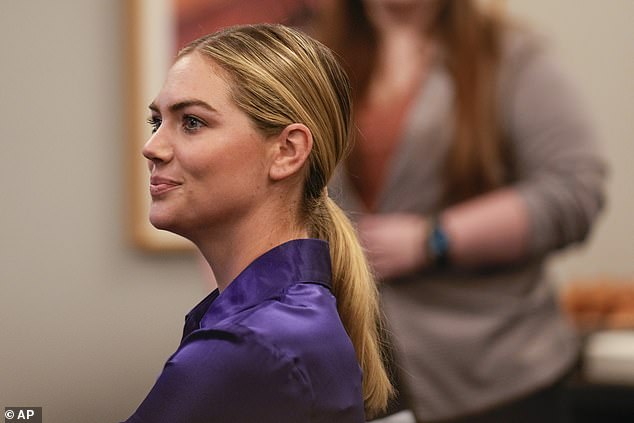 His model wife Kate Upton, 30, watched on from the front row of the press conference 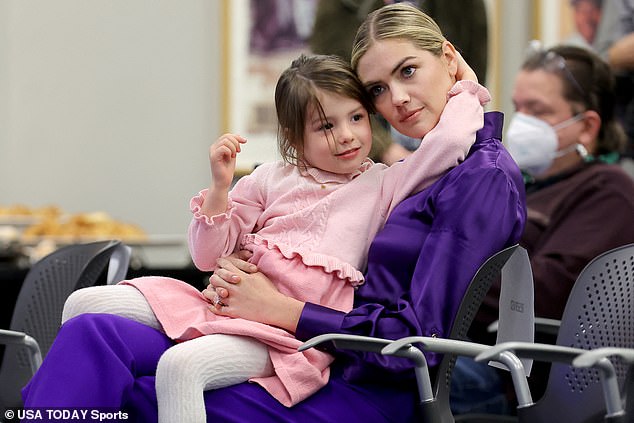 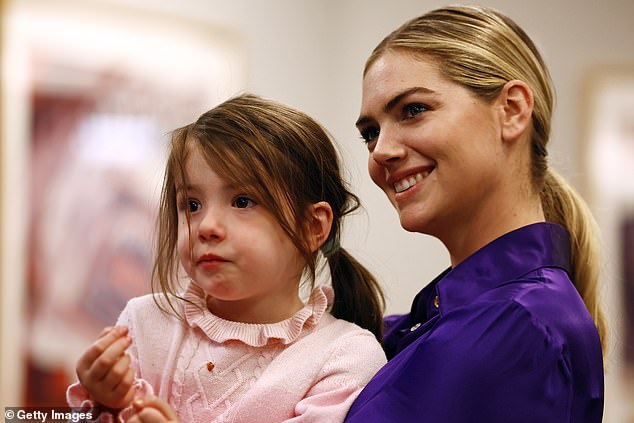 When asked what convinced him to sign with the New York Mets in the wake of winning a World Series with the Astros this year, Verlander had one word: ‘Steve.’

By that, he meant Mets owner Steve Cohen, and his willingness to spend his hedge-fund fortune to bring the team its first World Series title since 1986.

‘I took a leap of faith, and here we are a few weeks later, and I think that leap of faith has paid off,’ Verlander said. ‘Ultimately, some of those pieces aren’t cheap.’

Verlander’s mega-money contract is part of an offseason spending spree that has committed $476.7 million to seven free agents. 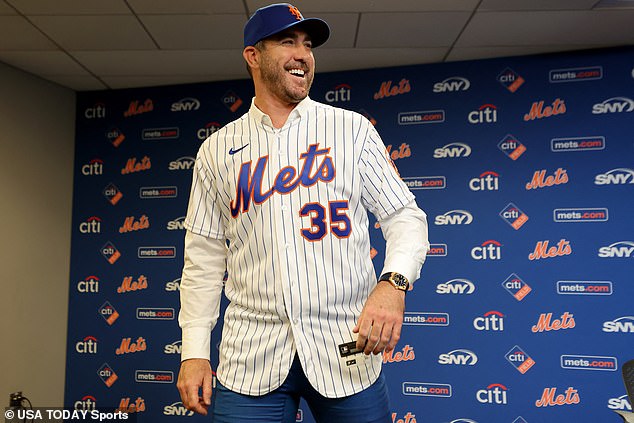 Verlander appeared delighted to have landed in New York, after winning the World Series 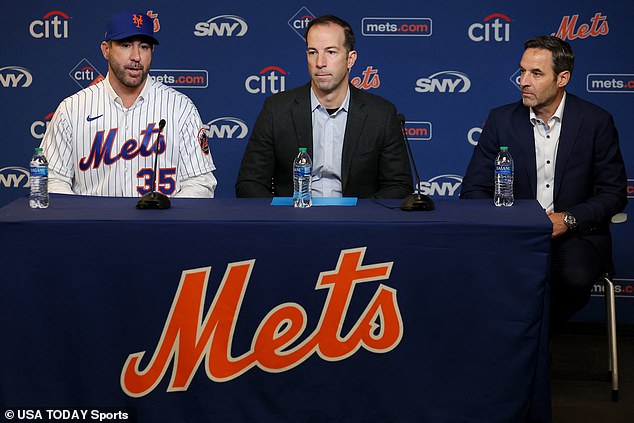 Verlander (left) revealed to the media that Steve Cohen (not pictured) convinced him to join. Pictured are the Mets general manager Billy Eppler (center) and Verlander’s agent Mark Pieper 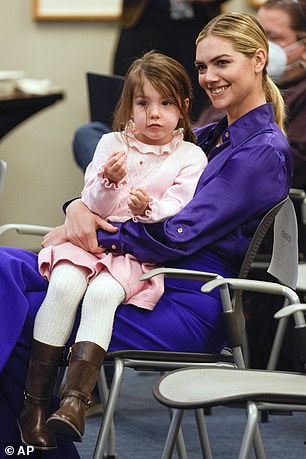 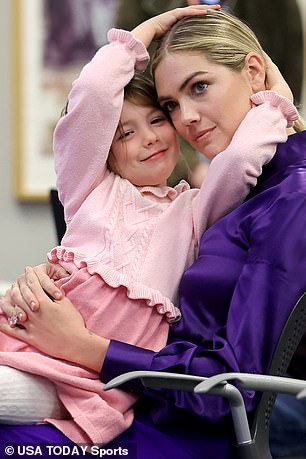 Upton smiles at her husband during the press conference, following his $86.7m agreement 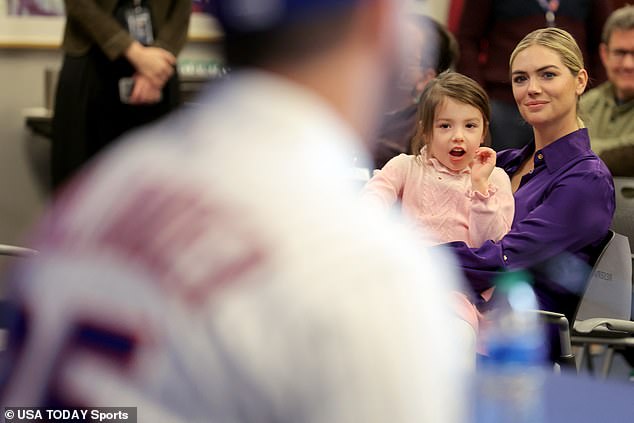 Upton, 30, watches on with daughter Genevieve on her lap as Verlander answers questions

‘In the background, Steve is going to do what is necessary,’ Verlander said.

Returning from Tommy John surgery in 2020, Verlander went 18-4 with a major league-low 1.75 ERA this year in 28 starts for the Astros. He also got his first win in nine career World Series starts in Game 5 as Houston beat Philadelphia in six games.

Verlander, who turns 40 in February, became the 11th player to win the Cy Young Award at least three times. 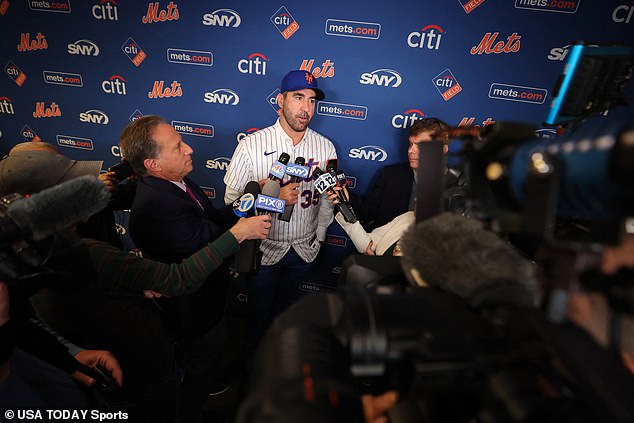 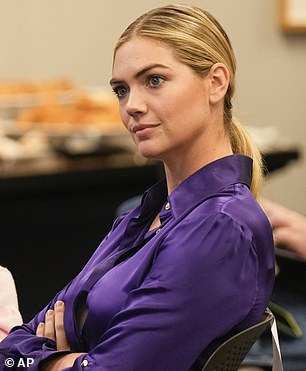 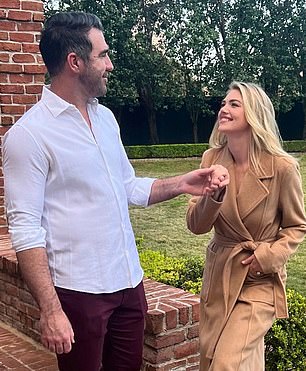 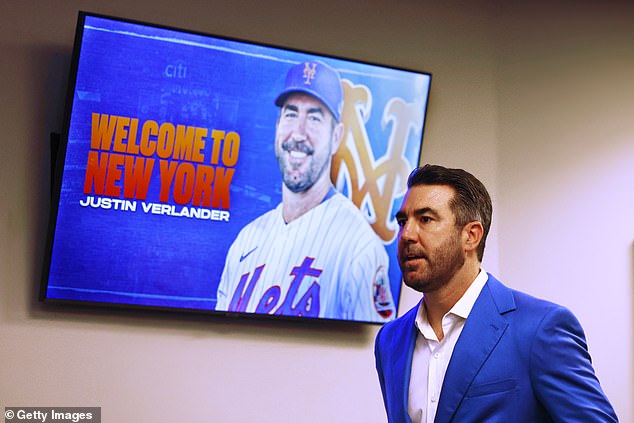 He takes a spot in the Mets rotation vacated by Jacob deGrom, who left for a $185 million, five-year contract with Texas, and reunites with Max Scherzer, his teammate in Detroit from 2010-14.

Verlander is guaranteed $43,333,333 in each of the next two seasons, matching Scherzer’s annual salary in a $130 million, three-year deal with the Mets through 2024.

New York has boosted its luxury tax payroll under owner Cohen to about $360 million next year, on track for a record tax of about $85 million.