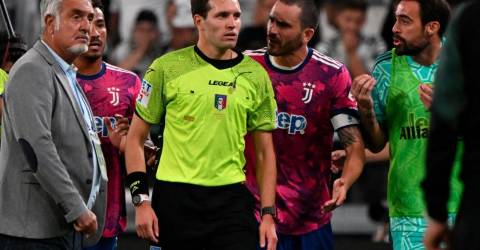 TURIN: Leonardo Bonucci scored a stoppage-time equaliser as Juventus fought back from two goals down to draw 2-2 at home with Salernitana but Massimiliano Allegri’s side were denied a late winner by VAR in a chaotic end to their Serie A clash on Sunday.

Juventus, who recorded their fourth draw in six Serie A games this season, thought they had snatched all three points when substitute Arkadiusz Milik headed home in the 94th minute but the goal was disallowed following a VAR review for offside.

Milik was sent off for a second yellow card after taking his shirt off in a premature celebration, along with team mate Juan Cuadrado and Salernitana’s Federico Fazio who were involved in a confrontation as tempers flared between the teams in a prolonged melee.

The draw left Juventus eighth in the table on 10 points, level, with Salernitana three points behind in 10th.

The visitors took the lead in the 18th minute when Pasquale Mazzocchi’s cross from the edge of the six-yard box found midfielder Antonio Candreva who converted with his body from close range.

Juve striker Dusan Vlahovic found the back of the net 20 minutes later with a low shot towards the far post but he was flagged for offside.

Striker Krzysztof Piatek made it 2-0 to Salernitana with a coolly-taken spot-kick just before halftime, sending keeper Mattia Perin the wrong way after the visitors were awarded a penalty when Gleison Bremer blocked Piatek’s strike with his hand.

Juventus sprung to life when Bremer scored in the 51st minute with a fantastic header and the home side then dominated possession and pressed high up the field and were awarded a penalty for a foul by Tonny Vilhena on defender Alex Sandro.

Bonucci failed to beat goalkeeper Luigi Sepe with his effort from the spot but fired home on the rebound.

Juve were not done there, however, and thought they had won it when Milik rose at the near post from a corner to glance his effort in before celebrating wildly.

Referee Matteo Marcenaro, however, was sent across to the VAR screen following a lengthy stoppage and the goal was ruled out as Bonucci was shown to be offside in front of the keeper when Milik made contact with the ball.

“The second half was a good game,“ Allegri told DAZN.

“It’s a result that sends us into the match on Wednesday with a different mood than a defeat.”

“We are very satisfied with the performance we put in and it would’ve been very disappointing to leave empty-handed,“ he said.

“VAR proves this sport has credibility. From the moment that the player who is offside tries to reach the ball, he is interfering with play.”

Juventus, who opened their Champions League campaign with a 2-1 defeat at Paris St Germain on Tuesday, remain unbeaten in Serie A following four draws and two wins.

They next host Benfica in Europe on Wednesday after which they travel to bottom-placed Monza in the league before the international break. – Reuters