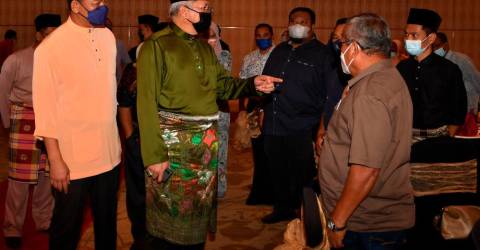 MELAKA: No parties have approached the Communications and Multimedia Ministry (K-KOMM) to discuss if a government media platform can be used to air the public debate between Datuk Seri Najib Tun Razak and Datuk Seri Anwar Ibrahim on May 12.

Communications and Multimedia Minister (MenKOMM) Tan Sri Annuar Musa said the debate had nothing to do with the government and he considered it a discourse between two individuals.

“So the government is staying out of this, and I have not been approached by anyone either. I believe it is still at a stage between two individuals,” he told reporters after attending a MenKOMM breaking of fast event with the Melaka community at the DoubleTree By Hilton hotel here today.

Annuar said he only followed the latest developments on the matter because one was the Opposition chief while the other was a government backbencher.

Annuar, however, did not rule out the use of social media or any of the latest digital platforms to air the debate.

“Live (streaming) is common with technology nowadays and perhaps there are also television networks that may want to provide a platform as well.

“Anyway, that’s something (to be decided) for later. We cannot say maybe either as saying that is akin to committing (for the debate to be aired via a government platform). I will consider this a normal debate between two individuals,” he said.

PKR Communications director Ahmad Fahmi Mohamed Fadzil announced earlier today that the debate will take place at 9 pm on May 12, and will, among others, discuss the Sapura Energy Bhd (SEB) issue and ‘Malaysia’s Future’ covering economy, politics, governance and the country’s direction.

Together with him at the media conference held here was Selangor Barisan Nasional (BN) Information chief Isham Jalil.

So far, the debate can be viewed via media channels to be announced later or watched live at Dewan Tunku Canselor, Universiti Malaya here.

Earlier, Annuar paid a courtesy call on Yang Dipertua Negeri of Melaka Tun Mohd Ali Mohd Rustam at his office at Seri Negeri and briefed him on efforts being taken by K-KOMM in Melaka.

“I also informed that the National Journalists Day will be held in Melaka this year,” Annuar said in a Twitter post tonight.-Bernama