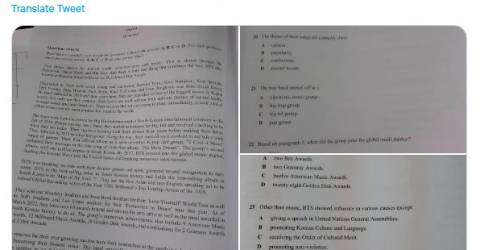 EVEN non-K-pop fans may have heard of South Korean supergroup BTS, and their fandom “ARMY members” are visible around the world. Despite that, we did not expect BTS to appear in a secondary school’s examination paper.

A Twitter user (@snowstar3012) recently posted an image allegedly showing a school’s Sijil Pelajaran Malaysia (SPM) trial English paper. The image showed a block of text which appeared to be an article on BTS, together with multiple-choice questions.

The user – obviously a BTS fan – wrote in the caption that they “didn’t even have to read it to answer it”.

Though we see nothing wrong with BTS’s name appearing in the exam – after all, the majority of their fans are of a younger generation, and it appears to be a trendy topic – but it definitely makes us smile.

It only goes to show how famous this group is.

So, what do you think the students must have felt while taking the exam?