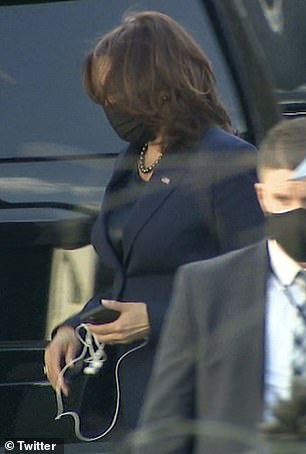 Vice President Kamala Harris is a frequent Wordle player, and suggested on Monday that she even played in while in Poland last month — but said security restrictions on her phone keep her from sharing her scores with friends and family.

Like many Americans, Harris is crazy about the ultra-popular word game — and she spent an entire interview with The Ringer discussing her playing habits.

For instance, she revealed that her go-to word is ‘notes’ because it has a ‘healthy mix of consonants and vowels.’

The game, recently purchased by the New York Times, gives users a daily five-letter word. The word must be guessed in six tries, and the color of ‘squares’ where each letter is placed change from gray, yellow or green to signify whether it’s in the word and in the right spot.

Harris said she uses the game as a ‘brain cleanser’ in-between meetings and even tries to get her aides interested.

‘Some of them know it. Some of them laugh about it, because they didn’t know that I know it and that I play it. So that was really funny,’ the vice president said.

‘And then there are others that I have, you know, in a moment of stress said, “Maybe you should learn how to play Wordle.”’

GOP Senator Ted Cruz took aim at Harris for finding time to do an interview about Wordle amid the myriad of crises plaguing the Biden administration.

‘The border is in crisis and inflation is skyrocketing. Meanwhile, Kamala Harris:’ Cruz wrote on Twitter followed by a link to the Ringer’s story.

The vice president, who President Joe Biden has tasked with a myriad of hefty issues like voting rights, illegal immigration and space, still finds time for the quick word game within her hectic schedule.

‘Wordle, for me, is like a brain cleanser. So it’s in the middle of very long days, back-to-back meetings on a lot of intense issues. If I have a break, let’s say that people are running late or my little 25 minutes for lunch, sometimes while I’m eating I’ll figure out Wordle,’ she said.

Her current streak for playing the game is 48 days in a row, Harris said before being asked about whether she’s ever missed the daily word due to her day’s travel. 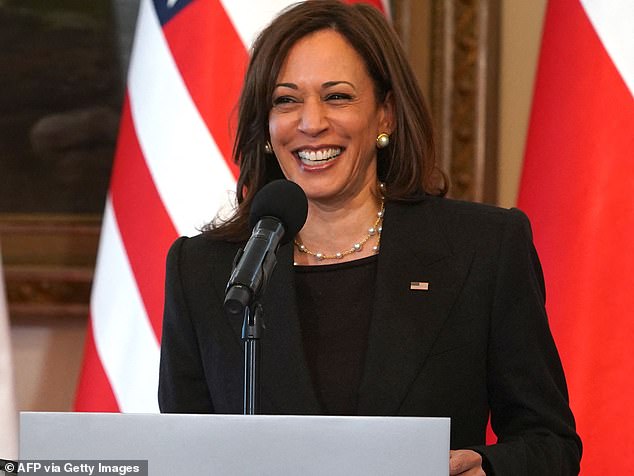 ‘I must have played it when I was in Poland. But we won’t talk about that, right?’ Harris said in the interview. She was slammed for laughing after answering a question on Ukrainian refugees during a press conference in Warsaw on that trip

‘Listen, it’s not like I’m going to a beach when I travel. It’s 13-, 14-hour days and, you know, little sleep. So, yeah. Wordle gets put aside,’ Harris explained, though she confessed to potentially playing during her high-stakes trip to Poland last month.

During the trip Harris was slammed for laughing after being asked a question about Ukrainian refugees. ‘A friend in need is a friend indeed,’ she said before seemingly laughing at her own response.

‘I must have played it when I was in Poland. But we won’t talk about that, right?’ Harris said in the interview. 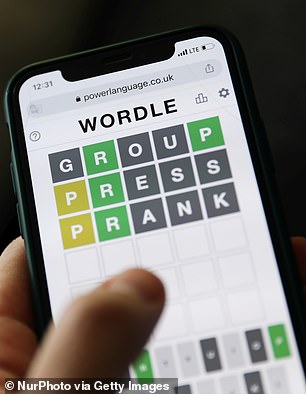 Harris said she has a 48-day streak in the game

She also refused to answer if there were times she pulled out the game during high-stress moments on the job.

She did, however, reveal where the heightened security around her role as vice president restricted her gaming experience.

Her ‘phone does not let’ her share her results on social media or send them to her contacts, Harris said.

‘My phone doesn’t let me text anybody, which is sad,’ she added.

But she and Second Gentleman Doug Emhoff manage to keep up with each other’s daily progress.

Harris also said her aides got ‘competitive’ over Wordle but they ‘have fun with each other’ — despite the parade of staffers who have been leaving the vice president’s office since a Politico story about allegations of a ‘toxic’ workplace broke last June.

‘Does the staff get competitive with whoever you’ve gotten over into the Wordle camp?’ she is asked.

‘I think they do,’ Harris answered.

‘You know, what I love about my team is that they don’t tell on each other. But they’re all very competitive because they’re all super smart. And they love games, when you can play and have fun with each other.’