A six-foot kangaroo with a ‘bad attitude’ has gone on a rampage in a small country town, viciously attacking three people and destroying beautiful gardens.

‘Until it rains, we just cannot get rid of them,’ Ms Caruana said.

‘It is not their fault, they have just reached the end of their tether.’

A 6ft kangaroo with a ‘bad attitude’ has terrorised a small Queensland town (Pictured: Roger the ‘buff kangaroo’)

The kangaroo then proceeded to wreck havoc across the small town by attacking three innocent people.

An elderly woman was the third victim to be ambushed by the towering kangaroo which left her with blood on her shoulders, neck and leg.

Kyran Sprott said she thought someone was dying when he heard the woman’s screams and ran to help.

‘I asked her what happened, and she said she had been attacked by a kangaroo,’ he 7News.

‘She was really shaken up and bleeding all over. I’ve got blood all over my arm.

‘She got scratch marks and was bleeding from either shoulder, down on her leg and at the front of the body too.’ 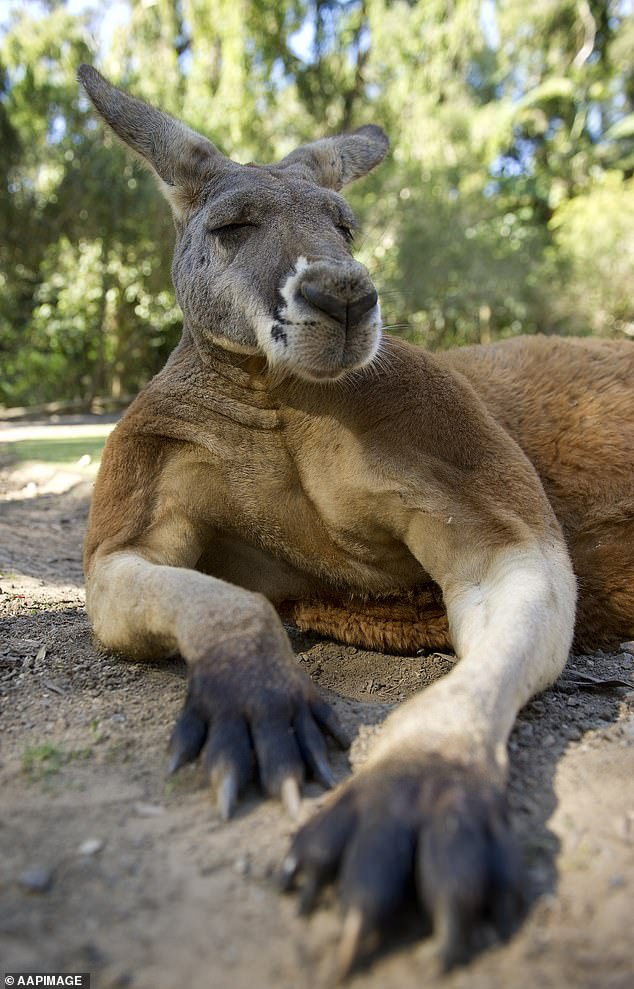 Shane Toy said the kangaroo was first spotted outside his pub about two months ago before the towering beast attacked his wife.

A customer armed with a bar stool came to Mrs Toy’s defence and then locked themselves in the pub until the kangaroo disappeared.

A New Zealand man visiting for a wedding was the first person to be pounced on by the kangaroo.

Mr Toy told the publication that the animal had its front paws on the man’s shoulders and was preparing to kick him before a wielder scared it off.

The kangaroo has since been tracked by local police.

Kangaroos are mostly docile creatures, and interactions with humans are infrequent.

They can be unpredictable when they feel they are threatened, or that their territory is being encroached on – whether by a human or another animal.

Fewer than five people each year seek treatment for kangaroo attacks in NSW.

The most common reasons for a kangaroo to attack a human are:

When a kangaroo attacks a person, the will generally do so in a similar matter to fighting another kangaroo, using their paws to push or ‘grapple’ the opponent to the ground.

How to avoid threatening a kangaroo:

• Do not walk directly toward the kangaroo.

• Do not stand up tall, stare or hold your arms out towards a kangaroo.

• Do not go near male kangaroos that are sparring, fighting or showing off       their size and strength to each other.

• Do not move between a female and her joey.

• Do not allow your dog to approach a kangaroo. Kangaroos will vigorously defend themselves against dogs, and this may draw you into a dangerous situation.