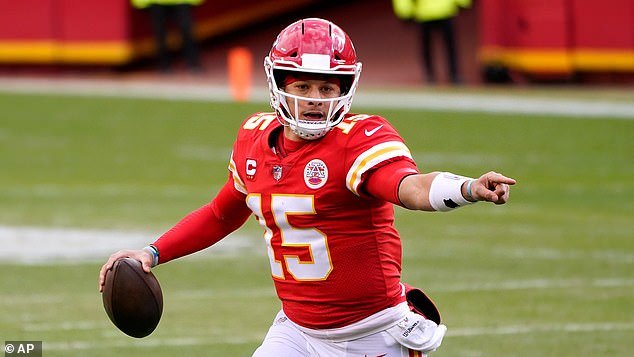 By Pete Carline For Mailonline

Patrick Mahomes will play for the Kansas City Chiefs in a must-see AFC Championship game against the Buffalo Bills after passing the NFL’s concussion protocol.

Last Sunday, the superstar quarterback was tackled on a running play in the third quarter of the Chiefs win over the Cleveland Browns, hitting his head on the turf and landing awkwardly.

An unsteady Mahomes, 25, was helped to his feet by team-mates and off the field by Chiefs staff. After being replaced by back-up Chad Henne he was pictured running to the locker room.

He was ruled out to play in the fourth quarter and placed in the NFL’s concussion protocol – a five-step process introduced by the NFL in 2018 to protect its athletes.

The Chiefs were always insistent that Mahomes would play against Buffalo. They did not say that Mahomes suffered a concussion with rumours saying he suffered nerve damage in his neck.

Following the 22-17 win over the Browns, a buoyant head coach Andy Reid said: ‘He got hit in the back of the head and kinda knocked the wind out of him and everything else with it. 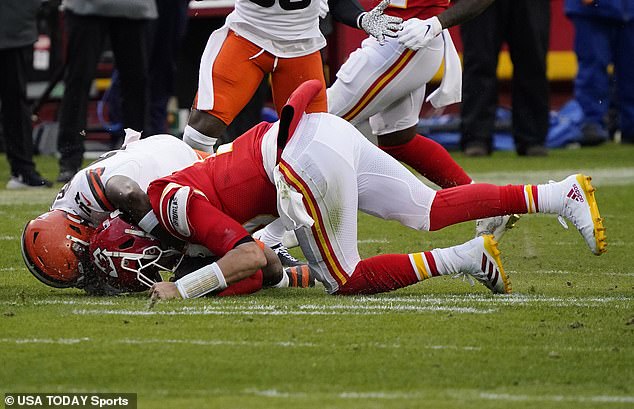 ‘He’s doing great right now which is a real positive as we looked at this. Passed all the deals that he needed to pass so we’ll see where it goes from here.’

Mahomes has practised all week and said on Friday: ‘Talking to all of the doctors and going through all of the testing, we have the belief that I’ll have no lingering effects and I’ll be able to go out there and be who I am.

‘There’s been a bunch of testing, a bunch of different things to make sure that I’m good to go and there’s no lingering effects or anything like that.

‘You want to be out there but you have to go through the protocol and you have to do everything the right way.

‘You have to look at it long-term as much as you look at it short-term.’

The magnificent Mahomes is instrumental to the Chiefs hopes of becoming the first team to win back-to-back Super Bowls since the New England Patriots in the 2004 season.

And, despite a toe injury suffered in the win over the Browns, he will line up against Buffalo in what promises to be an all-time classic.

They will play the winners of Green Bay Packers and the Tampa Bay Buccaneers, who play at Lambeau Field on Sunday night. 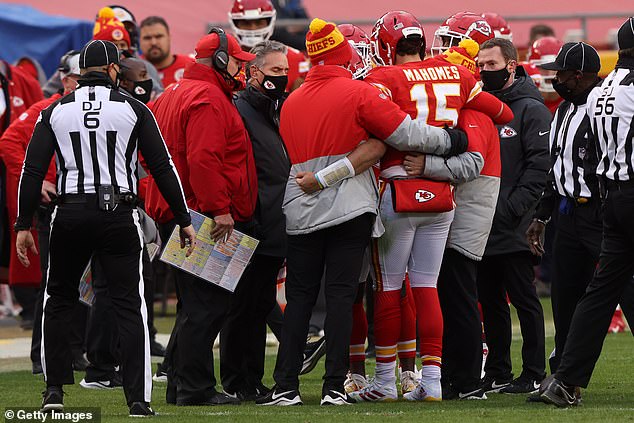