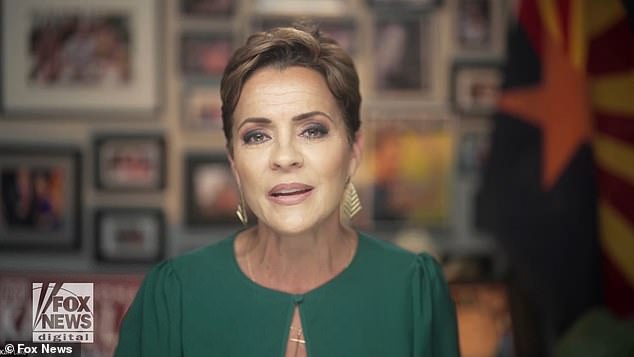 Kari Lake insists she will ‘100%’ be Arizona’s next governor as counting continues, Trump is still her number one choice to run in 2024 and Republicans need to focus on ‘America First’ policies

Republican Kari Lake said Thursday night that she would win Arizona’s governor’s race over Democrat Katie Hobbs once all the votes were counted.

‘I am 100 percent going to win. I have absolute 100 percent confidence that I will be the next governor of Arizona,’ Lake told Fox News Digital.

Lake has pointed fingers at Arizona’s election officials for slow-rolling results to delay her inevitable win, emulating the rhetoric of former President Donald Trump, who she said she’d like to see run again.

Republican Kari Lake said Thursday night that she would win Arizona’s governor’s race over Democrat Katie Hobbs once all the votes were counted. 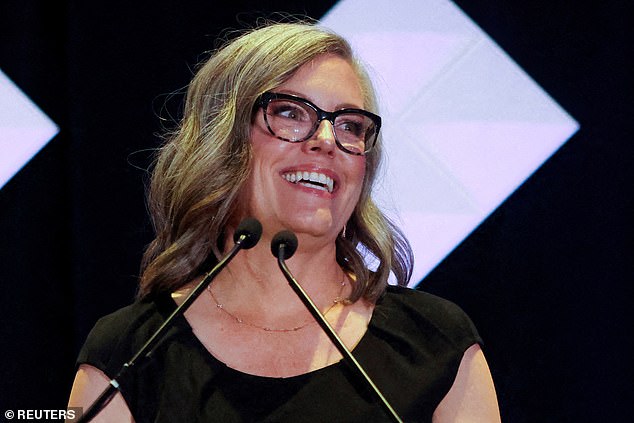 Democrat Katie Hobbs, Arizona’s secretary of state, has around a 27,000 lead in the governor’s race currently over Republican Kari Lake

Lake was singing a different tune than many members of her party who were largely blaming Trump for the Republicans’ subpar midterm results.

In the days before Election Day, Republicans were expected to easily take the House of Representatives and likely also flip control of the Senate.

While the GOP will most likely take control of the House, it will be a slim majority, and Democrats still have a good shot at maintaining the Senate.

Before the election, Lake looked in strong position to win her race against Hobbs, Arizona’s Democratic secretary of state.

FiveThirtyEight had given Lake a 68 percent chance of winning the race.

It’s, however, turned into a nail-biter.

Early Friday afternoon, Hobbs continued to have an edge, leading Lake by around 27,000 votes, with approximately 540,000 votes yet to be counted.

On Thursday night, Arizona’s largest county, Maricopa, released more numbers, but they didn’t give Lake the boost she desired.

The ballots tallied were those mailed in Saturday, Sunday and part of Monday.

Another 290,000 mail-in ballots were dropped off at polling locations on Election Day.

Trump has pushed that Republicans should vote in-person, so it’s unclear how Democrat or Republicans those ballots might lean.

Another 17,000 so-called ‘box three’ ballots – election day ballots that wouldn’t go through the tabulators properly – are also currently being counted in Maricopa County.

The chairman of Maricopa County’s board of supervisors Bill Gates sassed at Lake in a press conference Thursday evening for statements she made questioning the speed of the count.

Quite frankly, it is offensive for Kari Lake to say these people behind me are slow-rolling this,’ Gates said.

He told reporters that election officials were ‘already working 14 to 18 hours a day.’