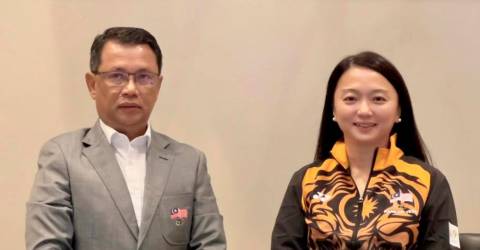 KUALA LUMPUR: The Ministry of Youth and Sports (KBS) has assured the Olympic Council of Malaysia (OCM) of full cooperation in their shared mission for the welfare of national athletes and excellence in the country’s sports arena next year.

Its minister, Hannah Yeoh assured that KBS had no problem joining hands with the leadership of OCM led by Tan Sri Mohamad Norza Zakaria after the governing body was “offended” by the remarks made by Deputy Minister of Youth and Sports Adam Adli Abdul Halim recently.

“I have expressed my desire as Minister of Youth and Sports and I have also heard Tan Sri (Norza Zakaria)’s speech… actually what we (KBS, OCM) want is the same.

“OCM and KBS will champion the same issue (welfare of national athletes), so it is better now that we work closely together to develop (the sports arena) together… and, yes, there is no problem between us (OCM and KBS),” Hannah said after attending the 203rd OCM executive council meeting at the Akademi Badminton Malaysia (ABM) in Bukit Kiara, here, today.

Previously, Adam Adli released a blanket statement that riled some national sports associations even though the intention was to eradicate irregularities and corruption in the national sports fraternity.

Following that, the majority of sports associations expressed disappointment with Adam Adli’s observation and wanted the Deputy Minister of Youth and Sports to justify his scathing claim that national sports associations are plagued by corruption.-Bernama