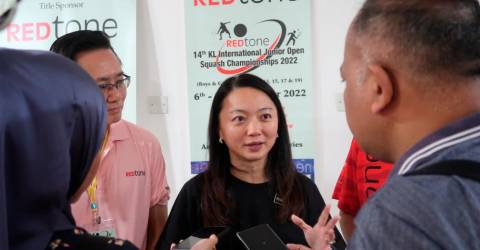 KUALA LUMPUR: The Youth and Sports Ministry (KBS) will ensure the country’s sports infrastructure is easily accessible to national athletes and also members of the public.

Its minister, Hannah Yeoh said the move is important for the development of sports at the grassroots.

“For example, squash, we see many champions coming from the state of Kedah but we know in Kedah itself, there are not many squash courts so we will look into how we could provide such facilities,” she said.

In this regard, Hannah said KBS is also actively meeting sports associations to discuss on their needs and the welfare of athletes.

She said the ministry would be gathering feedback from the meetings including from athletes until the end of December before drafting new policies of the ministry for the development of the nation’s sports.

“Yesterday, I met national track cycling champion, Datuk Mohd Azizulhasni Awang to get his views on developing sports and how to provide exposure to our athletes,” she said.

Commenting on Kuala Lumpur International Junior Open Squash Championship, Hannah said KBS would assist the various stakeholders to increase the number of tournaments for young players in the country.

“On organising tournaments, I have gathered information from organisers that several costs are needed to hold the tournaments and after this, we will assist whatever we can to help them organise more events,” she said. – Bernama