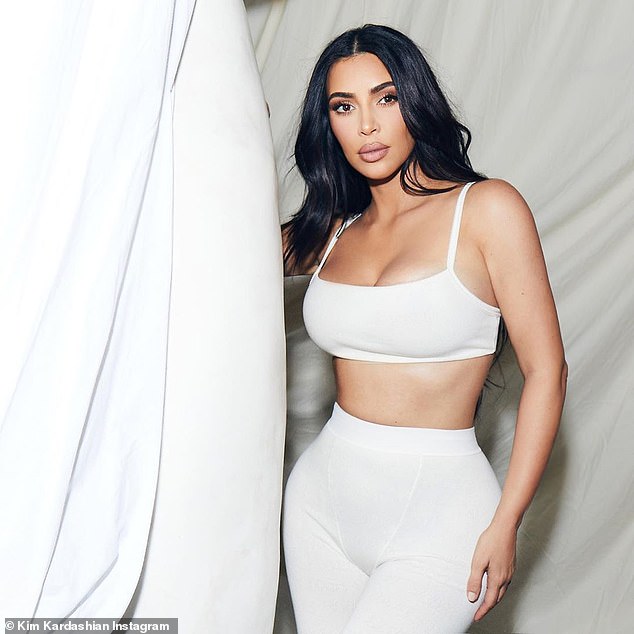 A host of stars have joined Kim Kardashian West in vowing to ‘freeze’ their Instagram and Facebook accounts on Wednesday, claiming the platforms allow for hate, propaganda and misinformation to spread.

The campaign accuses the platforms of ‘undermining democracy’ and profiting off allowing hate groups and pages to use their sites. The protest demands Facebook, which owns Instagram, ban pages that promote hate, forbid any event page with a call to arms, and remove election misinformation.

Mark Ruffalo and Kerry Washington, plus model Naomi Campbell and singer Katy Perry also hopped on board the social media boycott to raise awareness among fans who are used to seeing many of them interact online on a daily basis.

The 39-year-old reality star said that groups take advantage of the platforms to ‘sow division and split America apart’. The effort is a part of the #StopHateForProfit campaign seeking to hold social media companies accountable for hate on their platforms

Kardashian is the seventh most followed person on Instagram with 188 million followers and she has more than 30 million fans on Facebook.

The reality star, 39, who has been paid as much as $1 million for social media endorsements, said the platforms are allowing groups to ‘sow division’ and they ‘split America apart.’

‘I love that I can connect directly with you through Instagram and Facebook, but I can’t sit by and stay silent while these platforms continue to allow the spreading of hate, propaganda and misinformation – created by groups to sow division and split America apart – only to take steps after people are killed,’ she said in a lengthy message Tuesday.

‘Misinformation shared on social media has a serious impact on our elections and undermines our democracy. Please join me tomorrow when I will be ‘freezing’ my Instagram and FB account to tell Facebook to #StopHateForProfit. Link in bio for more info on how to preserve truth,’ Kardashian West added in her post.

Katy Perry wrote: ‘I love sharing my music and my life with you on Instagram and Facebook, but TBH I can’t sit idly by while these platforms turn a blind eye to groups and posts spreading hateful disinformation and intentional confusion.’

The campaign is accompanied by a ‘Week of Action’ that will end on September 18, with a call for people to use their right to vote in the November election.

More than 1,200 companies joined the boycott as well, including big brands like Unilever, Verizon, Adidas and Ford. 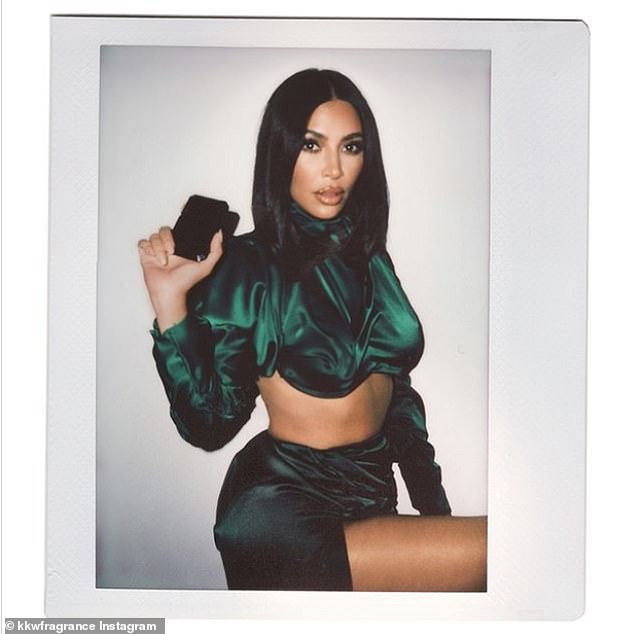 Kardashian is very active on Instagram and practically posts daily. She uses the platform to promote her latest products such as her upcoming perfume line 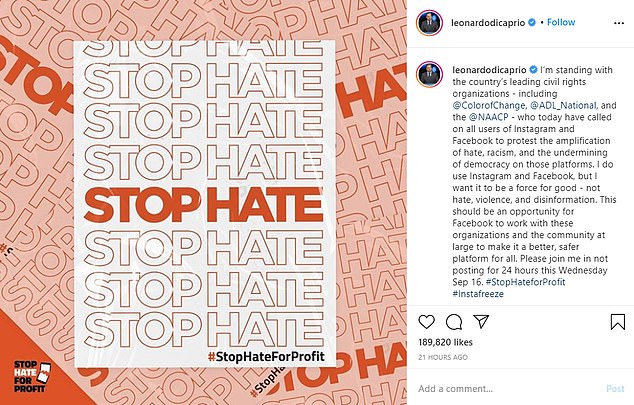 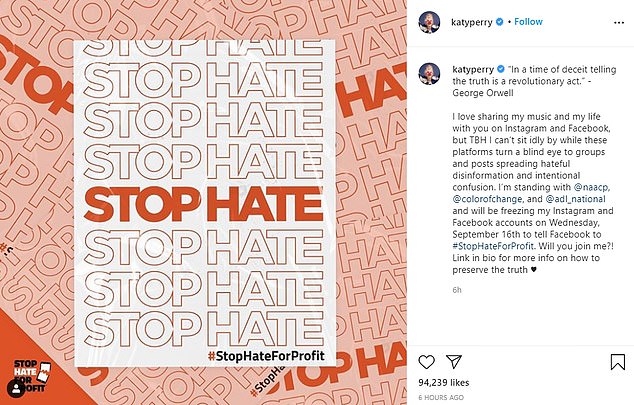 The protest is led by the same the coalition of civil rights groups that led a month-long advertising boycott against Facebook in July following the death of George Floyd. Those include the NAACP, Color of Change and Anti-Defamation League.

The #StopHateForProfit campaign says: ‘In the wake of a global health pandemic, Facebook’s failure to update the policies and processes that have allowed for hate, conspiracy theories and racist and antisemitic content to proliferate on its platform continues to be a source of pain for entire communities.’

‘In a historic election year, Facebook’s slow response to voter suppression, vitriolic and divisive content, and misinformation can have grave consequences for BIPOC voters and key democratic structures.’

Leonardo DiCaprio wrote: ‘I do use Instagram and Facebook, but I want it to be a force for good – not hate, violence, and disinformation.

‘This should be an opportunity for Facebook to work with these organizations and the community at large to make it a better, safer platform for all.’

Facebook has come under fire for questionable ads during the 2016 election and for allowing hate groups to gather on its platforms. 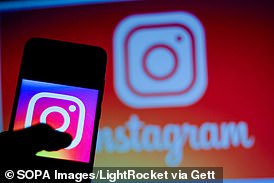 However, it’s unclear if the boycott will have any sway over the tech giant’s practices.

Facebook was also heavily criticized for failing to take down a self-proclaimed militia group’s online call to arms event in Kenosha, Wisconsin following protests in the wake of the police shooting of Jacob Blake, according to The Verge.

On August 25, two people were killed by 17-year-old police admirer Kyle Rittenhouse who was armed with a rifle during a protest in the city.

Afterwards it was revealed that the Kenosha Guard, a group that calls themselves a militia organization, issued a ‘call to arms’ on the platform.

At least two separate Facebook users reported the account for inciting violence prior to the shooting, but the Kenosha Guard’s Facebook page was only taken down the morning after the deadly shooting.

Facebook said in a statement at the time that the company’s investigation had produced no direct links between the shooting and the Kenosha Guard accounts.

On Monday BuzzFeed News reported that an internal whistleblower said the company was slow to act on misinformation efforts that undermined elections around the globe.

The issue is particularly worrisome ahead of the upcoming presidential election.

Facebook has also come under fire for failing to squash conspiracy theories regarding the pandemic.

In August the platform deleted one of President Donald Trump’s posts for violating its policy on coronavirus information after he shared a link to a Fox News video in which Trump says children are ‘virtually immune’ to the virus.

Medical experts say that’s not true because children do get the virus, but milder symptoms. 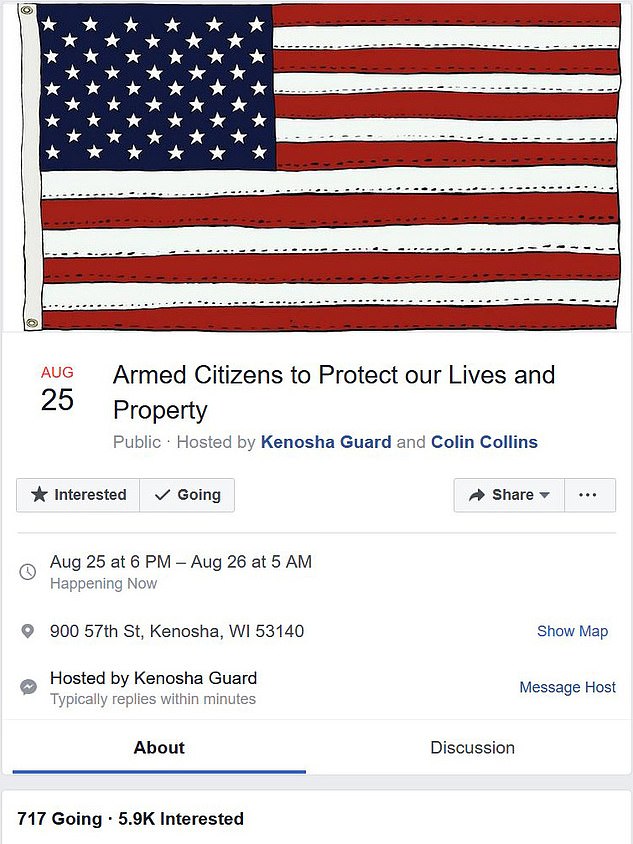 In August Facebook took down a ‘Kenosha Guard’ page with 3,000 members that rallied ‘patriots to take up arms and defend our city tonight from the evil thugs’ as protests decrying the police shooting of Jacob Blake took place. Pictured the event that encouraged armed civilians to assemble 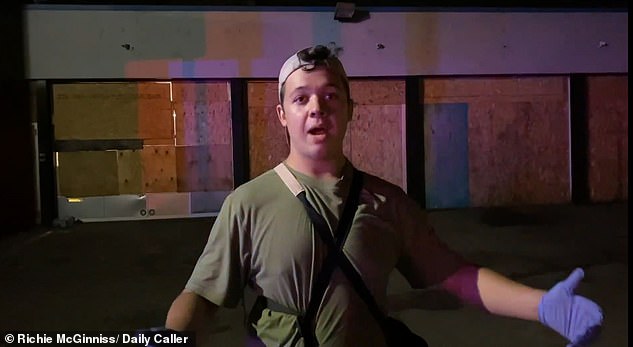 Facebook initially failed to take action against the militia group on August 25 saying it was not breaking its rules, despite Facebook users reporting the group to the company. The apparent backtracking in the decision comes after 17-year-old Kyle Rittenhouse was arrested for the murder of two Black Lives Matter protesters. Rittenhouse pictured August 25 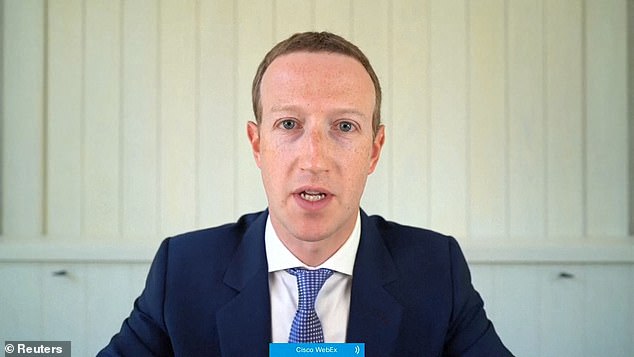 Facebook has come under fire for failing to squash coronavirus conspiracy theories, for allowing political misinformation to spread, and letting hate groups use and create call to arms events on the platform. Facebook founder Mark Zuckerberg above