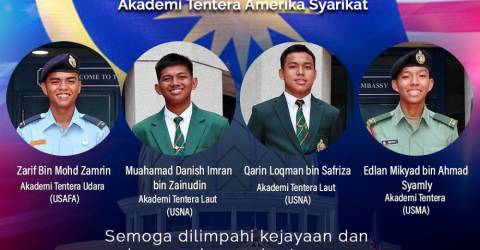 In a poster uploaded to the Istana Negara’s official Facebook page, Their Majesties also prayed for the students to continue to excel and achieve continuous success.

According to the statement issued by the US Embassy in Malaysia, the four students are Edlan Mikyad Ahmad Syamly, Muhamad Danish Imran Zainudin, Qarin Loqman Safriza and Zarif Mohd Zamrin.

Edlan Mikyad and Zarif, both from Universiti Pertahanan Nasional Malaysia, will be placed at the US Military Academy (USMA) at West Point, New York and the US Air Force Academy (USAFA) in Colorado, respectively.

Meanwhile, Muhamad Danish Imran and Qarin Loqman, from the Royal Military College, will be placed at the US Naval Academy (USNA) in Annapolis, Maryland.

They will be joining five Malaysian students currently undergoing training at the US service academies, one of whom at USMA, and two each at USNA and USAFA. — Bernama