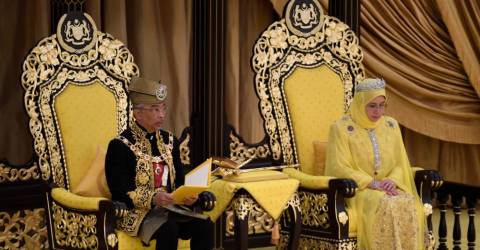 According to a post on Istana Negara’s official Facebook page, Al-Sultan Abdullah and Tunku Hajah Azizah personally pinned the new rank of Colonel, which took effect on April 7, on Tengku Amir Nasser.

Tengku Amir Nasser, who was previously a Lieutenant Colonel, now serves as Commander of Regiment 505 of the Territorial Army.

Tengku Ahmad Ismail is scheduled to attend the Commissioning Course at the Royal Military Academy (RMA) Sandhurst in the United Kingdom from Aug 22 this year to Aug 18 next year.

RMA Sandhurst is one of the most renowned military academies in the world.

The King underwent military training at RMA Sandhurst from 1978 to 1979 while Tengku Hassanal attended the academy from 2018 to 2019.