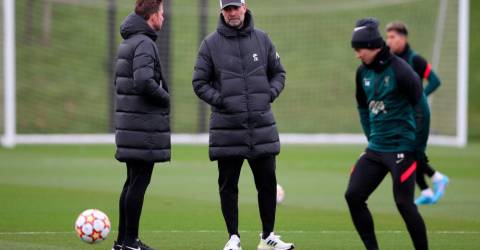 LIVERPOOL’S players must show maturity as they chase four titles this season but that is not the only quality they must focus on, manager Juergen Klopp said ahead of Tuesday’s Champions League quarter-final first-leg tie against Benfica.

The Merseyside club won the League Cup in February and are second in the Premier League having also reached the semi-finals of the FA Cup to remain on track for an unprecedented haul of four trophies this season.

Speaking before leaving to Portugal to face Benfica, Klopp said Saturday’s hard-fought 2-0 league win over Watford was a perfect example of how he wanted his team to approach their matches.

“It’ll be massively important but it’s not the only thing if you are mature, it doesn’t help much. But if you can combine quality, desire, excitement and mentality with maturity… you cannot buy that,“ Klopp told reporters on Monday.

“We have played games before when we were 1-0 up and were still running like mad as if we were not… I want my players thinking in the right way and that’s what I saw on Saturday.

“We all know one failure, one little misstep, and at least one competition can be gone. That’s no problem for us, we’re just ready for the next challenge.”

Liverpool face leaders Manchester City on Sunday and Klopp said that he had no trouble preparing his players for important games this month.

“It’s nice, we enjoy it,“ Klopp said. “Training sessions are very short. The meeting we had this morning was shorter than the training session. It’s the situation we would have dreamed of.

“I don’t think about being better, I think about us being on top of our game. That’s the plan for all the games. You try to improve in general. Benfica maybe aren’t where they want to be in their league but they are tough opponents.”

Liverpool will have a full squad to choose from for the Benfica clash, with Trent Alexander-Arnold back following a hamstring injury and Naby Keita shaking off a knee issue. — Reuters