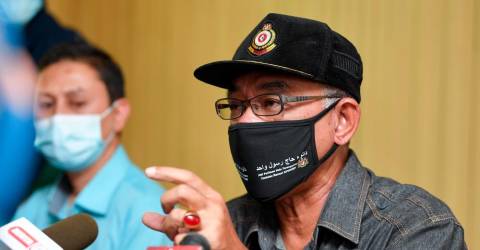 KUALA TERENGGANU: The Ministry of Domestic Trade and Consumer Affairs (KPDNHEP) launched Ops Pasar (Sayur 2) nationwide beginning yesterday, to investigate reports of rising vegetable prices, which are alleged to have been hiked by up to 200 per cent.

Its Deputy Minister Datuk Rosol Wahid (pix) said as of the first day, 43 premises and 131 types of vegetables such as choy sum (sawi), beans, broccoli and red chillies had been inspected, covering all levels of the distribution network, namely suppliers, wholesalers and retailers nationwide.

“The ministry has never taken the complaints of consumers and traders on the increase in the price of goods in the market lightly, because we also have families, relatives and friends who feel this repercussion as well.

“As of yesterday, KPDNHEP has issued 43 information verification notices and 40 notices to traders to confirm whether there is an element of profiteering or taking excessive profits from the sale of vegetables,“ he said when met at the Petronas and KPDNHEP consumer safety campaign programme in Kuala Berang, today.

Rosol added that traders were given two days to respond, while for written notices, a period of five days was allocated to obtain feedback.

At the same time, he said a total of 1,000 price monitoring officers were assigned to monitor 1,500 locations daily to review and record changes in vegetable prices in the market.

In a separate development, Rosol, who is also Hulu Terengganu MP, said Gardenia Bakeries (KL) Sdn Bhd was expected to respond to the ministry’s call to temporarily postpone the increase in bread prices tomorrow.

He said the recommendation was conveyed to the company in a meeting on Friday, to seek justification for the price change.

“We want to create a win-win situation for both parties, where traders do not have to close the factory, while consumers are not burdened with a price increase of even 10 sen,“ he said. — Bernama