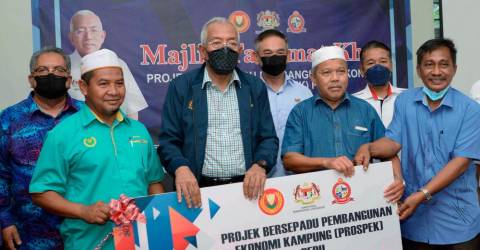 He said that Prospek, which involves 16 projects, will be implemented through three components, namely the economy, basic infrastructure and housing.

“Currently, there are 13 extension projects being developed, and the Prospek in the Pedu area here is one of the new projects implemented by KPLB this year.

“The project in Pedu has already started and the duration of the development is up to five years with a total cost of RM8 million,” he said after attending a special briefing on the Pedu Prospek in Kampung Padang Setol, here today.

Mahdzir said that the Prospek project in Pedu is expected to benefit more than 3,000 residents in the mukim and in the Padang Terap district.

According to him, the development phase involves 12 villages in the Pedu district, which are already involved in various economic activities and have the potential to be developed further in areas such as agriculture, livestock as well as small and medium industries (SMIs).

“Also, the tourism sector is among the economic activities that have been identified for development under this project, with KEDA as the implementing agency and assisted by Kolej Universiti Agrosains Malaysia (UCAM) as the research implementing agency.

“The development of niche products based on durian crops is one of the focuses for the economic component to be implemented under Prospek in Pedu,” he added.

For the record, the implementation of Prospek began in 2018 through two pilot projects, namely Prospek Rintis in Kampung Sidam, Kulim in Kedah and Kampung Pasir Raja, Dungun in Terengganu.