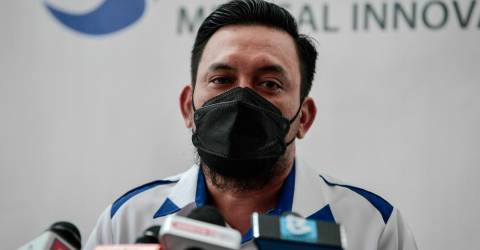 BUKIT MERTAJAM: The Penang branch of the Domestic Trade and Consumer Affairs Ministry (KPDNHEP) has issued 269 compounds worth RM95,000 from Jan 1 to April 30, this year.

Its director, Mohd Ridzuan Ab Ghapar (pix) said a total of 19,666 premises were inspected during the same period, to ensure that industry players comply with the rules set.

“Of the total, 184 cases were recorded under the Price Control and Anti-Profiteering Act 2011, which involved price-related offences and failure to display price tags.

“KPDNHEP will constantly monitor the situation to ensure traders abide by the regulations, especially during festive seasons,” he told reporters after the state KPDNHEP Aidilfitri open house here today.

He said KPDNHEP enforcement officers always carried out monitoring and inspections at locations that were the focus of the public such as supermarkets, public markets, and farmers’ markets.

In the meantime, he said there were no reports or complaints received on the price hike of chicken or vegetables in Penang after the Aidilfitri celebration as reported in other states. — Bernama