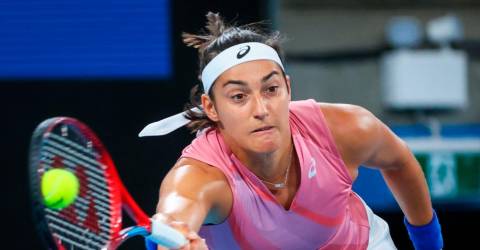 SYDNEY: French Open champion Barbora Krejcikova(pix) showed her resilience to overcome a poor opening set and hand Anett Kontaveit a 0-6 6-4 7-6 (12) defeat on Friday to advance to the final of the Sydney Tennis Classic.

Krejcikova lost the opener to love but bounced back to see off the world number seven and set up a meeting with either Paula Badosa or Daria Kasatkina in the final of the Australian Open warm-up event.

The Czech, ranked number four in the world, needed a lengthy tie breaker to see off Kontaveit, winning the final game 14-12 when she converted match point at the fifth attempt.

“She started really well and was hitting the ball really hard,“ said Krejcikova.

“I felt at some point I’m going to get my chances, I need to convert them.

“I felt she was playing really aggressive I had to find a plan B and I’m really happy I found a plan B.”

A tight opening game saw Kontaveit forced to save three break points before holding serve, but from there she moved clear.

The Estonian held a 4-0 lead and further extended her advantage when she saved another break point in the fifth game to underline her early dominance.

Kontaveit then closed out the set to love when Krejcikova hit into the net after a dipping return caught the Czech off balance.

Stung by that heavy opening loss, Krejcikova pushed early in the second set as she forced Kontaveit to save four break points in the first game.

Eventually the pressure paid off when a cross-court winner gave Krejcikova her long-awaited break in the ninth game and from there she levelled the scores.

Both players broke serve early in the decider before Krejcikova was forced to save match point on three occasions, eventually taking proceedings into a tie-break.

The Czech finally prevailed after the pair spurned several match-winning opportunities each to progress to Saturday’s showpiece. –Reuters