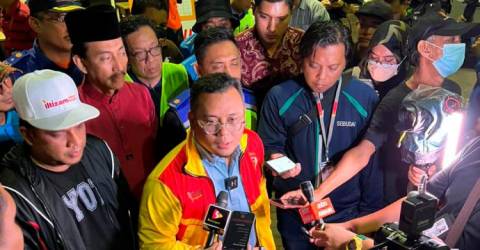 He said this was because the state authorities had activated pumps to drain stagnant water in several areas in Meru that were affected by the flood.

“After the pumps were activated, Meru has started to improve and will stabilise maybe this evening or after a few hours.

“However, there is another problem where the flood water in Meru, Klang, flows to Kuala Selangor and that is why Kuala Selangor has started to experience flooding today,“ he told reporters near here today.

Amirudin, who is the Pakatan Harapan (PH) candidate for the Gombak parliamentary seat in the 15th general election (GE15), was met by reporters after attending a get-together and hi-tea with the Indian community in Indian Settlement, Gombak.

He said, however, the Selangor government’s preparations to face expected floods such as rescue efforts and evacuation centres (PPS) are at their best.

On Nov 10, it was reported that several areas around Meru were hit by flash floods of up to 0.3 metre, including Meru 3, Persiaran Hamzah Alang, Jalan Kasban, Jalan Kenangan, Taman Daya, Jalan Khamis, Jalan Jabar and Sekolah Menengah Kebangsaan Meru.

According to the InfoBencanaJKM website, as of 4.30 pm today, eight PPS have been opened in Selangor, with three in Klang district and five in Kuala Selangor, housing a total of 748 victims from 183 families.-Bernama