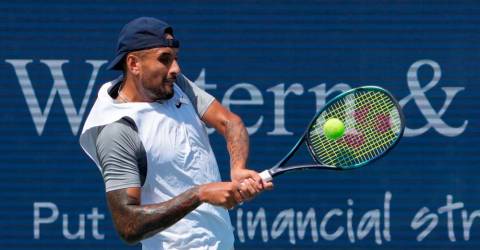 CINCINNATI: Nick Kyrgios began the last major US Open tune-up with a 7-5, 6-4 win over Alejandro Davidovich Fokina on Tuesday at the ATP/WTA Cincinnati Masters.

The Australian marched through with 29 winners – including 10 aces – and three breaks of the Spaniard’s serve to reach the second round.

The 28th-ranked Kyrgios has won all 11 of his first-round matches this season and won his 22nd match since returning to the ATP in June after skipping the clay season.

“Physically, I didn’t feel the best, but you have to keep pushing, keep trying,“ Kyrgios said.

“Alejandro’s a hell of a player, he’s got a lot of shots at his disposal. I had to serve well and dictate,“ the Montreal quarter-finalist aded.

“It was tricky conditions out there, the courts are a lot more lively than Montreal, it was harder to control the ball.”

Kyrgios took 50 minutes to secure the first set, wrapping it up after a break in the penultimate game with back-to-back serve winners.

He went up an early break to start the second set but lost it three games later as the dissatisfied Australian kept up a frustrated gripe session with his three-strong support box as Davidovich Fokina made it 2-2.

Kyrgios struck straight back with a love break to regain control 3-2 and ran out the winner in 91 minutes on his second match point.

It marked a happy return to Cincinnati for Kyrgios, who was fined a record $113,000 during a spectacular meltdown at the tournament in 2019 when he smashed two racquets in the locker room in a loss to Karen Khachanov.

Kyrgios acknowledged his turbulent history at the tournament after Tuesday’s win.

“I’ve played some amazing tennis here and had some crazy outbursts,“ he said.

“It’s a flip of the coin as to which Kyrgios shows up here.

“Hopefully this time around it’s just a calm, collected — I just want to have a good week before I continue on the good habits and give myself all the best for preparation for the US Open.

“I have been an emotional kind of tennis player my entire career. Ever since I picked up a racquet, my mum used to watch me throw tantrums and cry on the court and be emotional when I lost.

“That’s just me showing that I do care about the result – I think that’s important. – AFP