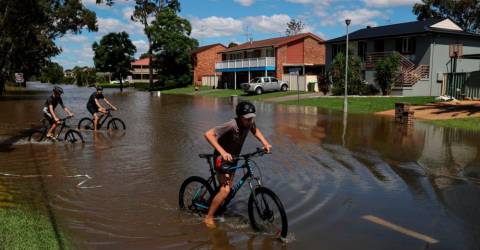 SYDNEY: Australia’s Bureau of Meteorology on Tuesday issued an alert for a La Nina weather event in the tropical Pacific, spelling a stormy summer for much of Australia’s east.

The Australian bureau’s climate modelling suggested that the event would likely last through to the beginning of Australia’s autumn in March.

Meaning “the girl” in Spanish, La Niña is a complex weather phenomenon that occurs every few years.

Extreme weather expert Milton Speer from the University of Technology Sydney (UTS) told Xinhua the announcement was of little surprise given the type of weather Australia’s eastern states had already been experiencing.

Parts of the states of New South Wales (NSW), Queensland and Victoria have already experienced heavy rains and flooding, with the Australian bureau announcing that in October, rain levels were 8 per cent above normal levels.

Further to this, the Australian bureau recorded its first tropical cyclone, Cyclone Paddy, on Tuesday morning off the coast of Christmas Island above Australia’s northwest coast.

Speer told Xinhua that higher ocean surface temperatures to Australia’s north had been a strong sign of the coming event.

“Sea surface temperatures, right across the top of Australia have been pretty anomalous.”

Speer said that residents across Queensland and NSW should brace for consistent, heavy rain and storms throughout the summer.

He also said rising temperatures due to global warming could see such weather events become even more extreme in Australia.

“One of the factors in climate change is the warming up of the oceans and particularly, in the tropical Equatorial areas. So, there just seems to be more available moisture.”

Australia’s last major La Niña event was between the summers of 2010 and 2012 and resulted in some of the wettest years ever recorded and widespread flooding.