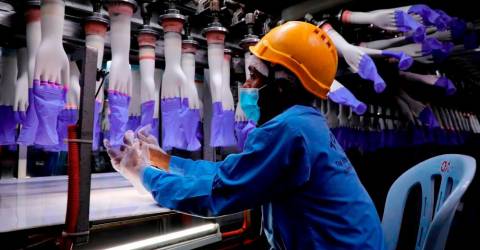 KUALA LUMPUR: Malaysia’s labour productivity expressed as value added per worker jumped 10.1 per cent in the third quarter of 2022 (Q3) versus 5.5 per cent in Q2, which is in line with the strong economic activities which saw gross domestic product (GDP) strengthening by 14.2 per cent, Statistics Department Malaysia (DoSM) said.

“Labour productivity, measured by value added per hour worked, rose almost three-fold to 3.8 per cent versus 1.3 per cent in Q2 2022.

‘’Total hours worked rose 10.0 per cent against 7.5 per cent in Q2 to record 9.0 billion hours (Q2 2022: 8.9 billion hours), in line with the expansion of the economic performance based on various indicators including the latest data for the month of September 2022,’’ DoSM said.

On an economic sector basis, all sectors saw an increase in productivity in Q3 with the construction sector posting the highest value added per worker at 14.9 per cent.

The services sector also recorded double-digit productivity growth at 11.4 per cent, with all its sub-sectors recording positive growth, with the food and beverage and accommodation sub-sector posting the highest growth at 43.7 per cent.

Manufacturing sector’s labour productivity grew 8.2 per cent in Q3 2022, with beverages and tobacco products sub-sector posting the highest growth of 49 per cent. This was followed by the transport equipment, other manufacturing and repair sub-sector at 30.5 per cent; wood products, furniture, paper products and printing at 13.2 per cent, and electrical, electronic and optical products at 11.5 per cent.

Still at Q3 2022, labour productivity by value added per worker for mining and quarrying, and agriculture sectors, recovered positively with growth of 8.8 per cent and 1.8 per cent, respectively.

Measuring productivity on a value-added per-hour basis, services grew the highest at 6.0 per cent followed by mining and quarrying at 4.2 per cent, and manufacturing at 1.4 per cent.

‘’The revival of economic and social activities, supported by improved job market conditions and incomes, has translated into stronger Malaysian economic growth.

‘’In line with these positive developments, the labour market is also expected to continue to be resilient in the following months,’’ he concluded. – Bernama