Boris Johnson‘s colossal victory in the General Election was splashed over front pages across the world today as the Prime Minister’s historic win cleared the way for Brexit.

German tabloid Bild went with ‘Landslide victory for Brexit Boris!’, while Italy‘s La Repubblica summed up its reports with, ‘Europa bye-bye,’ and referenced the Tories’ biggest win since Margaret Thatcher in 1987.

Others spoke of ‘Hurricane Boris’ and the Brexit ‘earthquake.’

Like the British press, the European papers were largely relying on the exit polls, but it became clear early on Thursday night that Mr Johnson was to deliver a thumping victory.

The Conservatives have so far taken 364 seats, a gain of 47, while Labour sits on 203, a loss of 59. There is just one more seat left to declare its result.

Germany daily tabloid Bild went with: ‘Landslide victory for Brexit Boris!’ and ‘Jeremy Corbyn announces his withdrawal.’ In its main story on Brexit the paper spoke of the Tories’ biggest triumph since Margaret Thatcher in 1987 and the powerful mandate the Prime Minister now had to ‘get Brexit done.’ They also explained Mr Johnson’s pun about having breakfast first, the German word for Brexit, ‘frühstück’, does not have the same chime with the word ‘Brexit’ as it does in English. 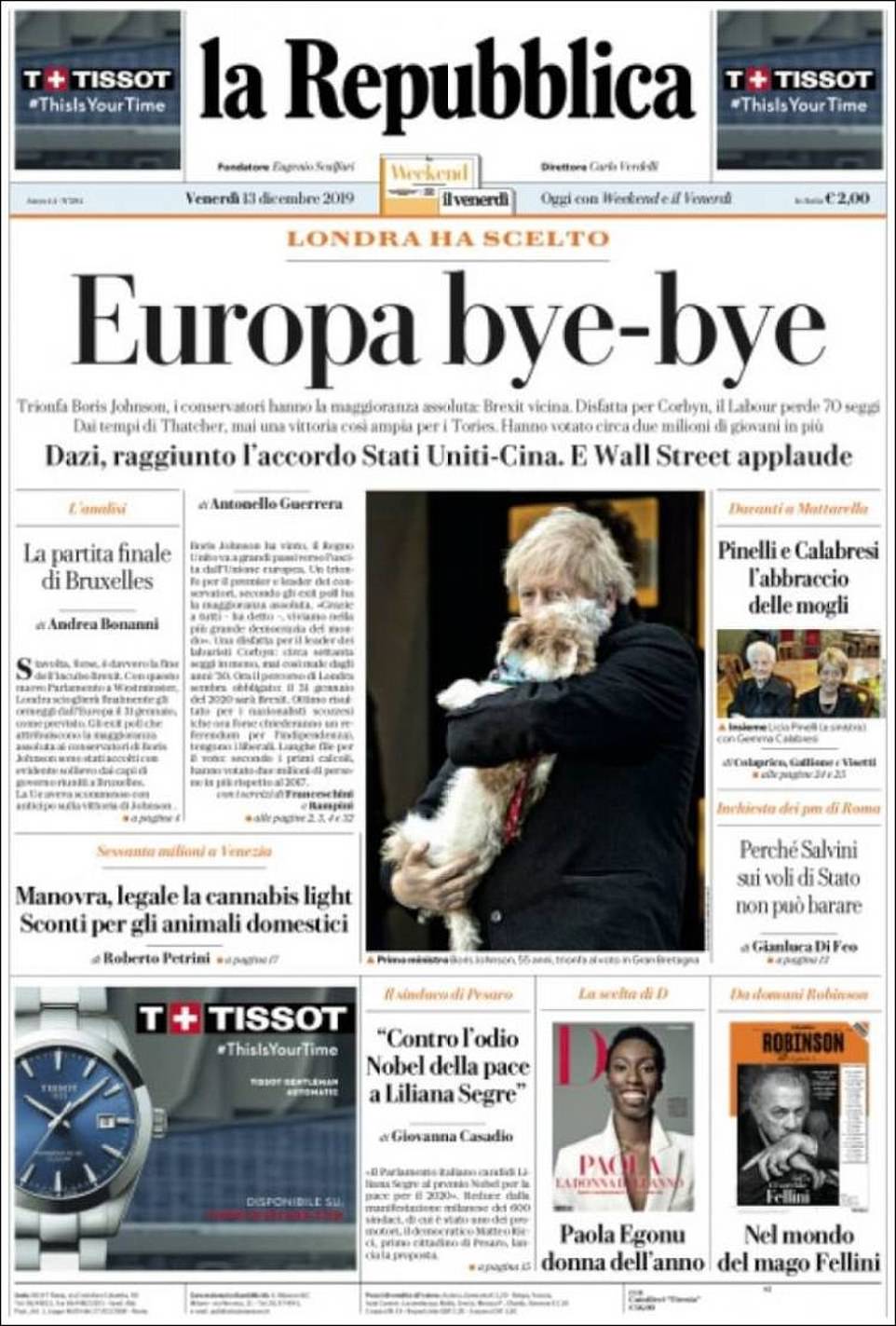 Italy’s second biggest newspaper La Repubblica ran the headline, ‘Europa bye-bye’, and below it a story (top left) titled, ‘The final game of Brussels.’ And at the top of its page ‘London has chosen’ was the tagline. The newspaper’s website made mention of President Donald Trump’s congratulations for the British Prime Minister high up in its report. It also spoke of the worst defeat for Labour since 1935 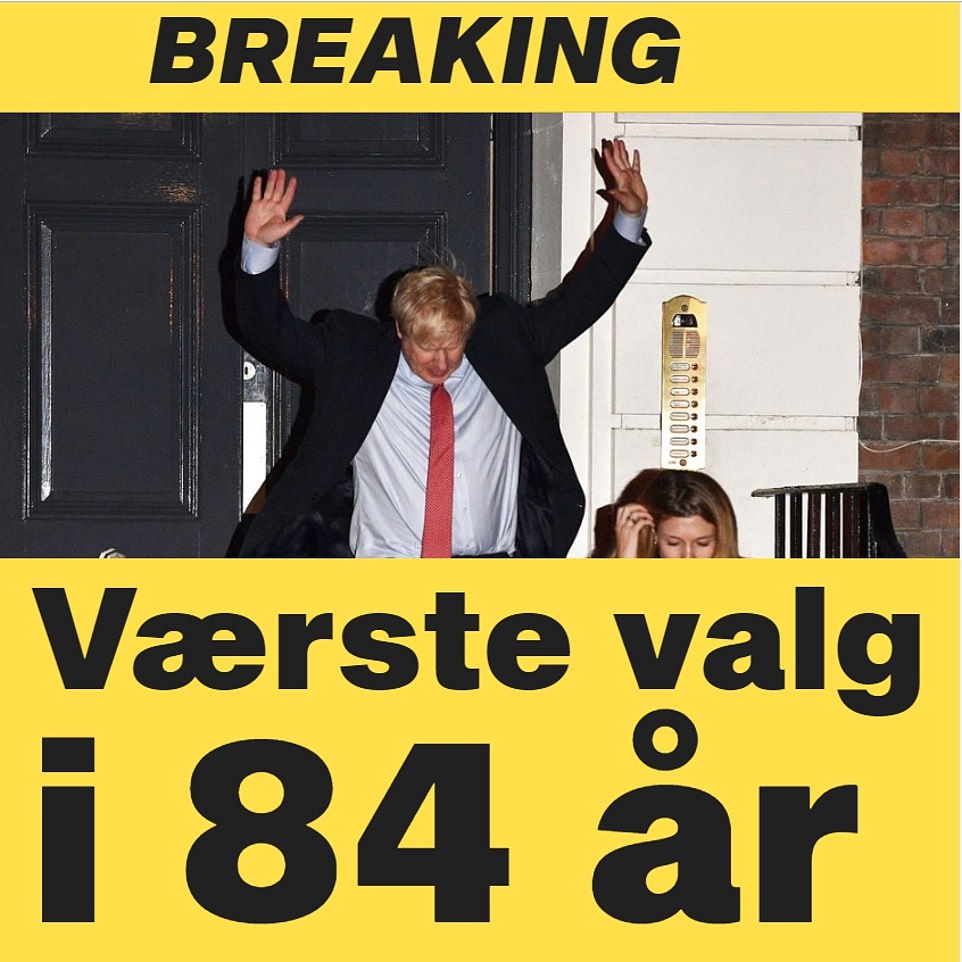 Copenhagen’s daily newspaper B.T. wrote: ‘Worst result in 84 years,’ a reference to Labour’s dismal showing in the general election. The paper said: ‘Boris Johnson and the Conservative Party have won a major victory in the British election – even before all the votes have been counted. That means Boris Johnson is mandated to implement its Brexit plans by the end of January.’ 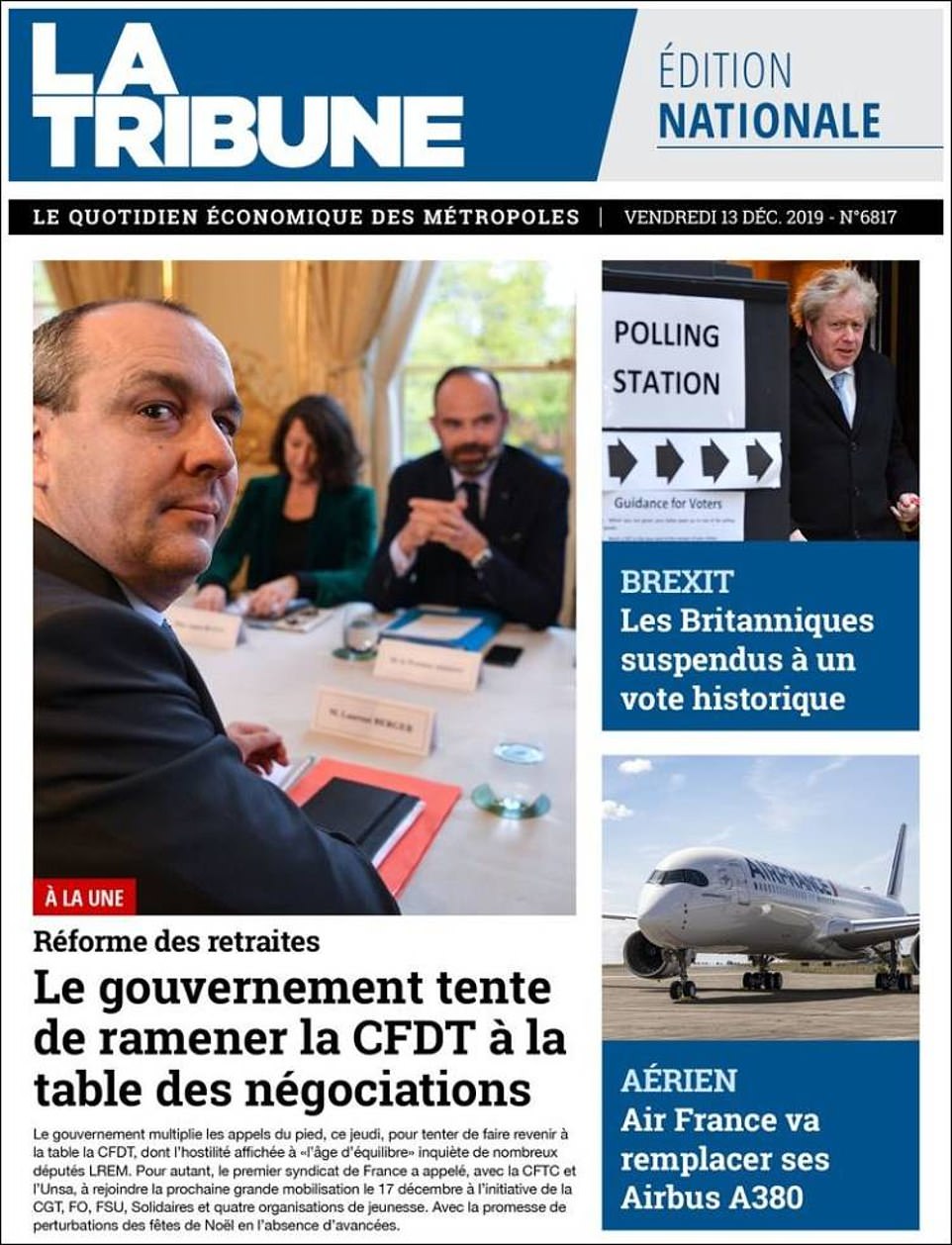 French weekly financial paper La Tribune headlined their UK election story: ‘The British hanging on a historic vote.’ The French paper, having gone to press before the result was clear, speculated last night: ‘Brexit with Boris Johnson or a second referendum with Jeremy Corbyn? The British vote this Thursday, is fateful for the future of the country in the coming decades … the British will choose between the Brexit of Prime Minister Boris Johnson or a new referendum on the withdrawal from the EU promised by Labour’s Jeremy Corbyn’ 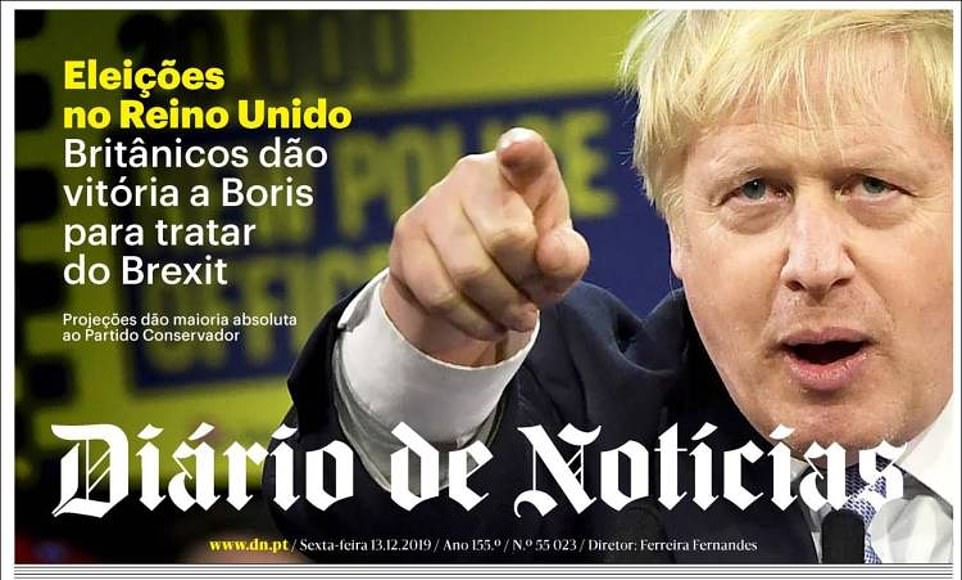 Portuguese daily newspaper published in Lisbon, Diario de Noticias, wrote: ‘Elections in the UK give Boris victory to deal with Brexit.’ It wrote about the historic decision by Britain to vote ahead of the Christmas holidays, the first time since 1923, and how the election looked set to break the ‘paralisia’ (paralysis) that had gripped the House of Commons since the Brexit vote in 2016 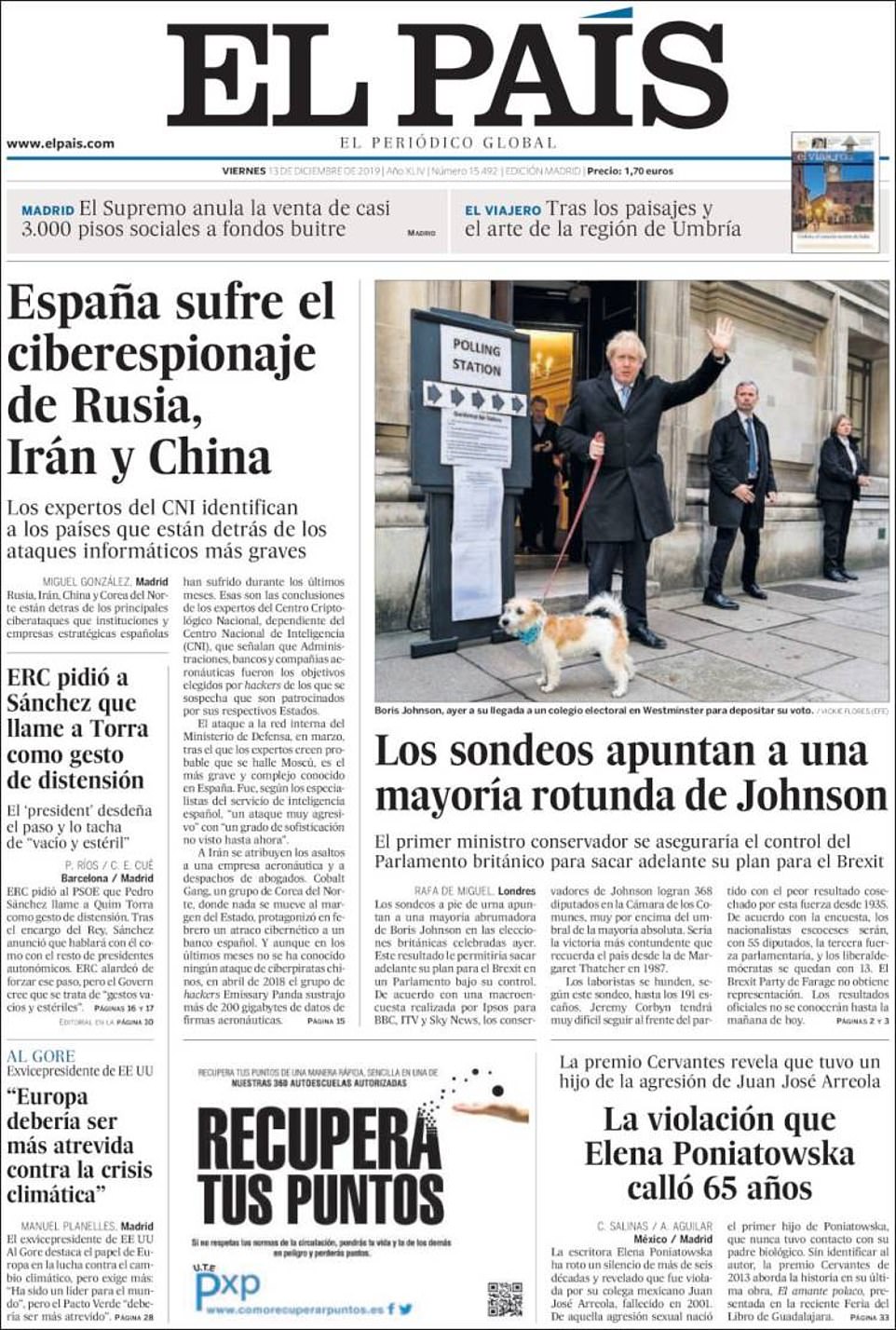 The Spanish daily newspaper based in Madrid wrote: ‘Polls point to a firm majority for Johnson.’ The Spanish paper hailed Boris Johnson’s  thumping win which had far exceed the Tory party’s expectations, despite strong polling numbers in the weeks leading up to the vote. It referenced the breaking down of ‘muralla roja’ (the red wall) of the Labour party by the Conservatives and quoted Mr Johnson in English: ‘Get Brexit Done’ 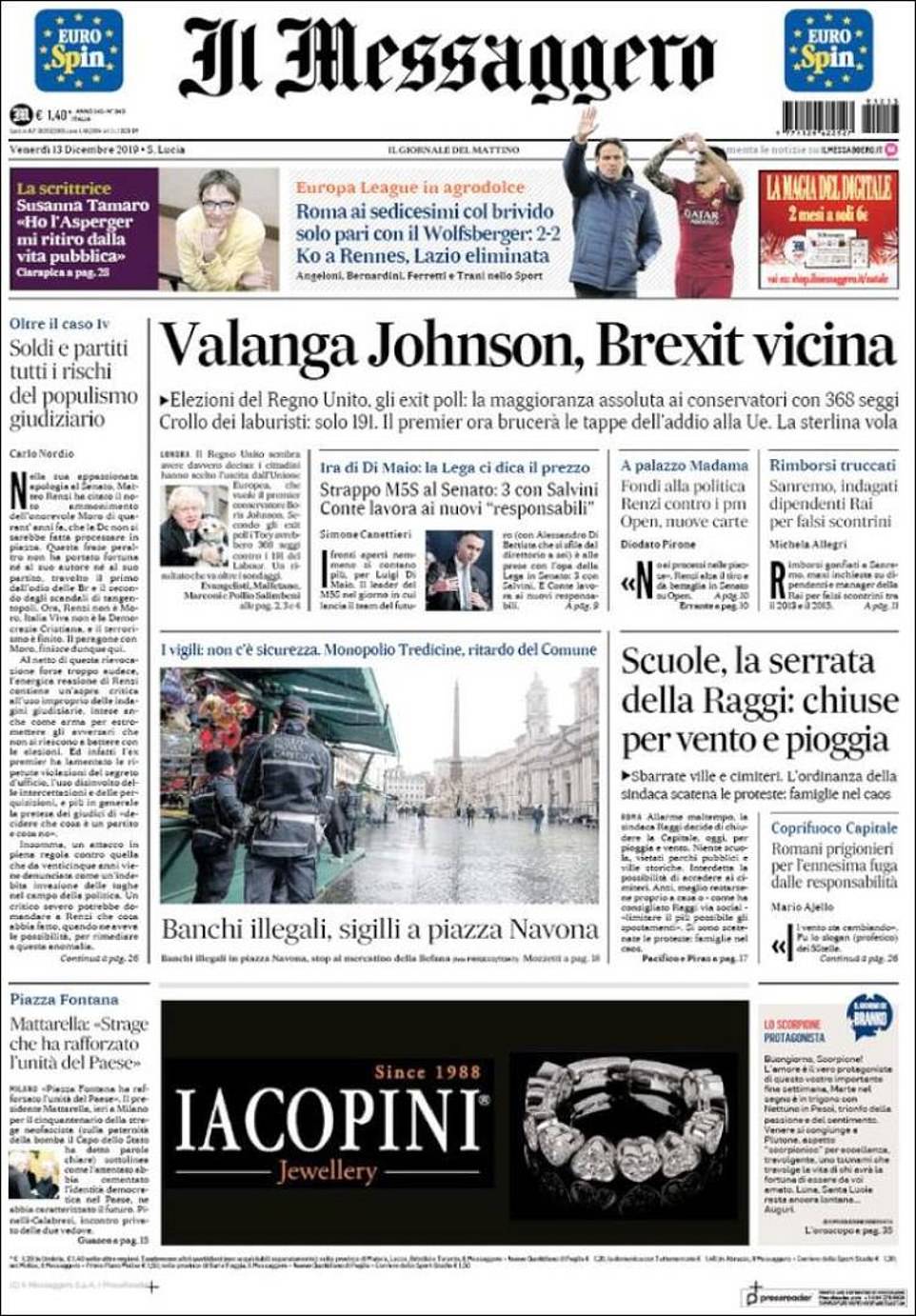 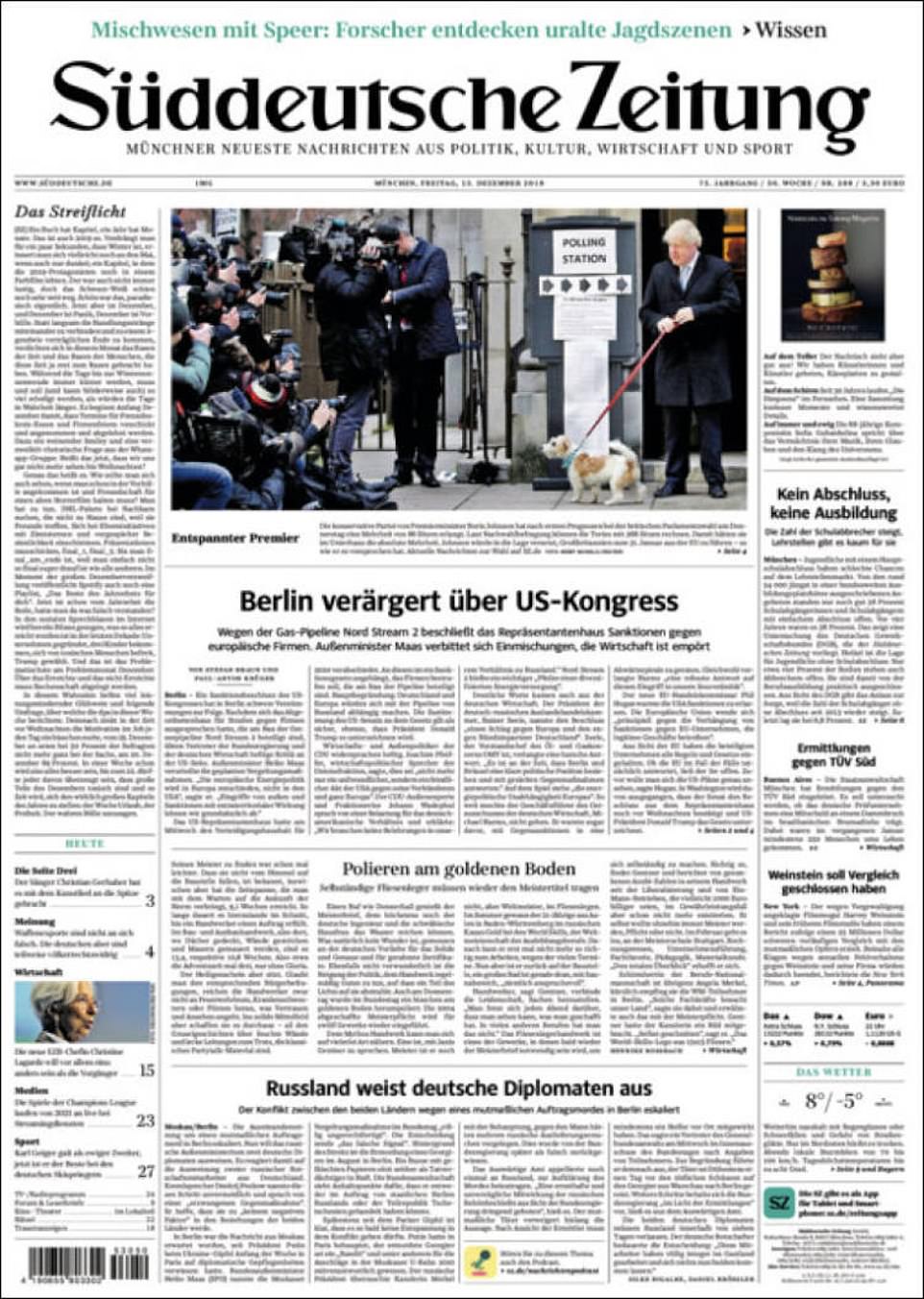 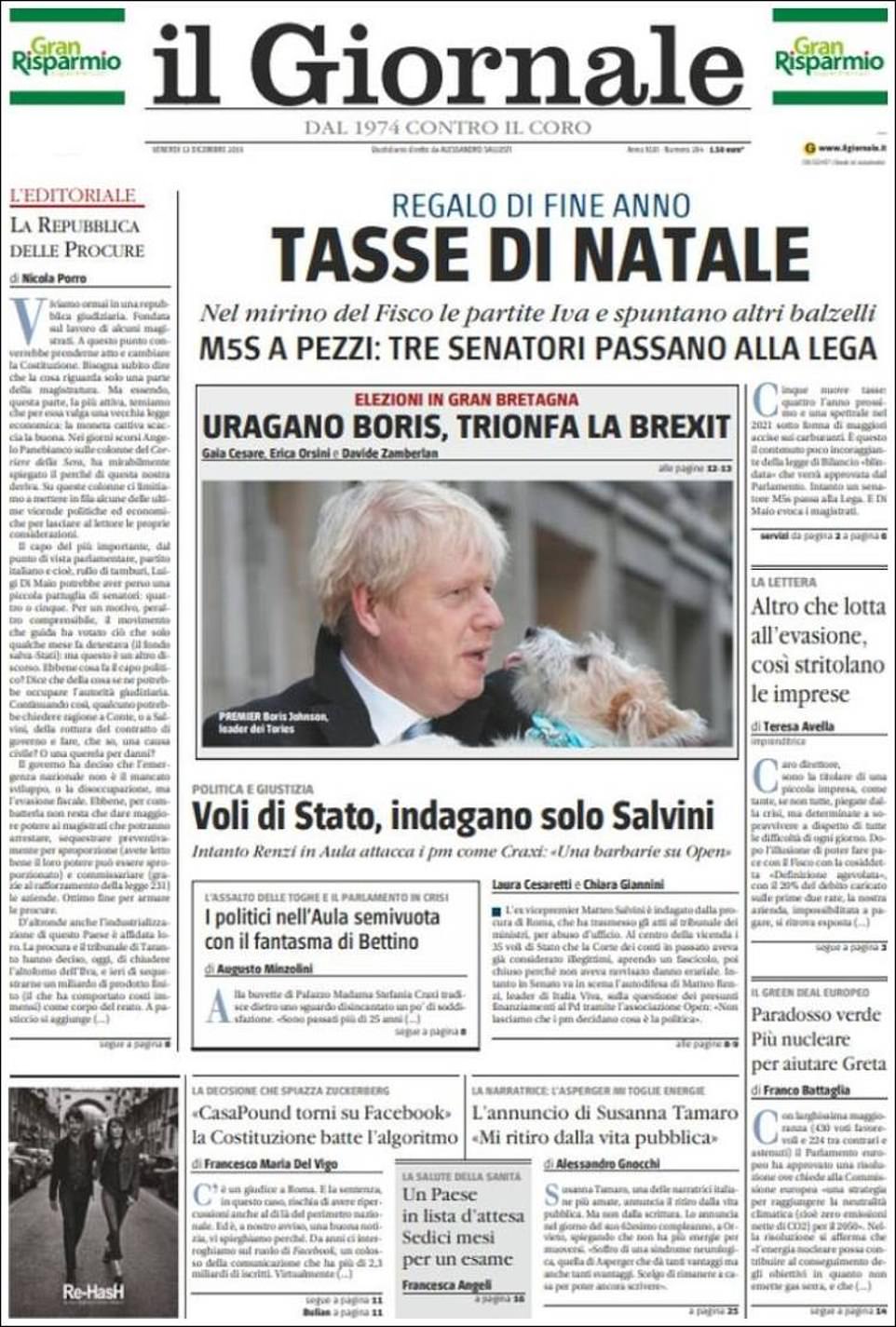 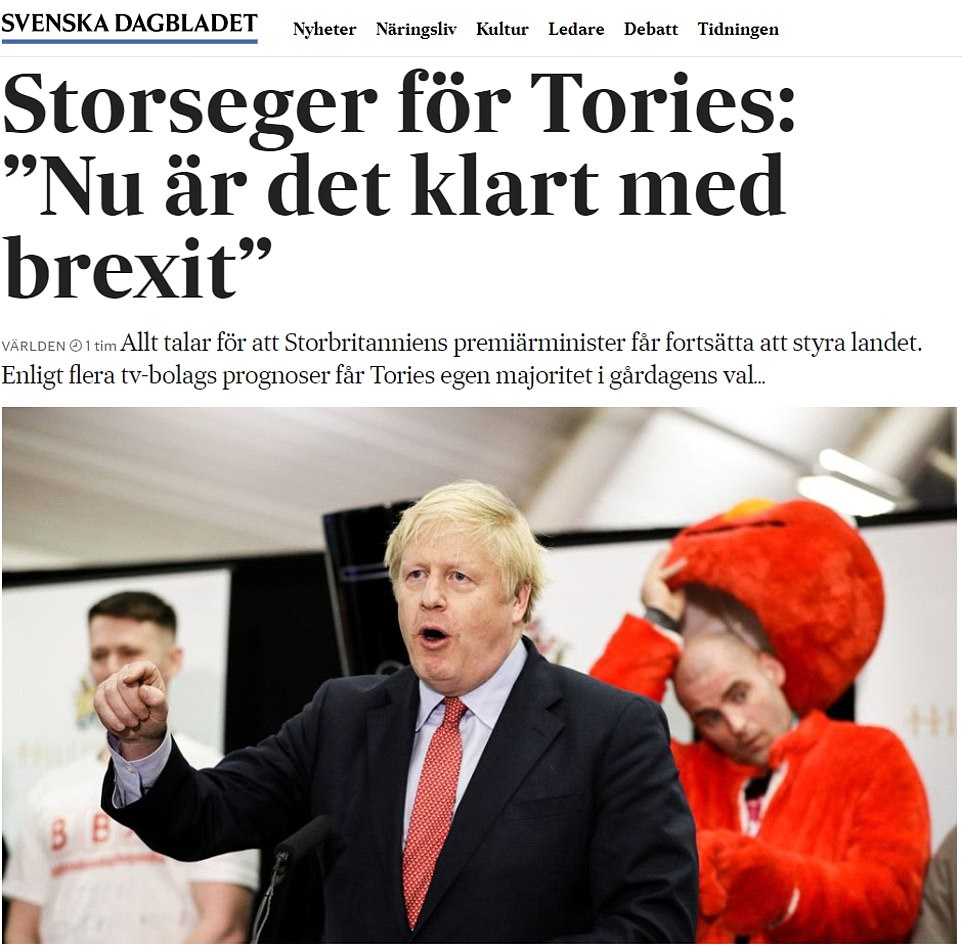 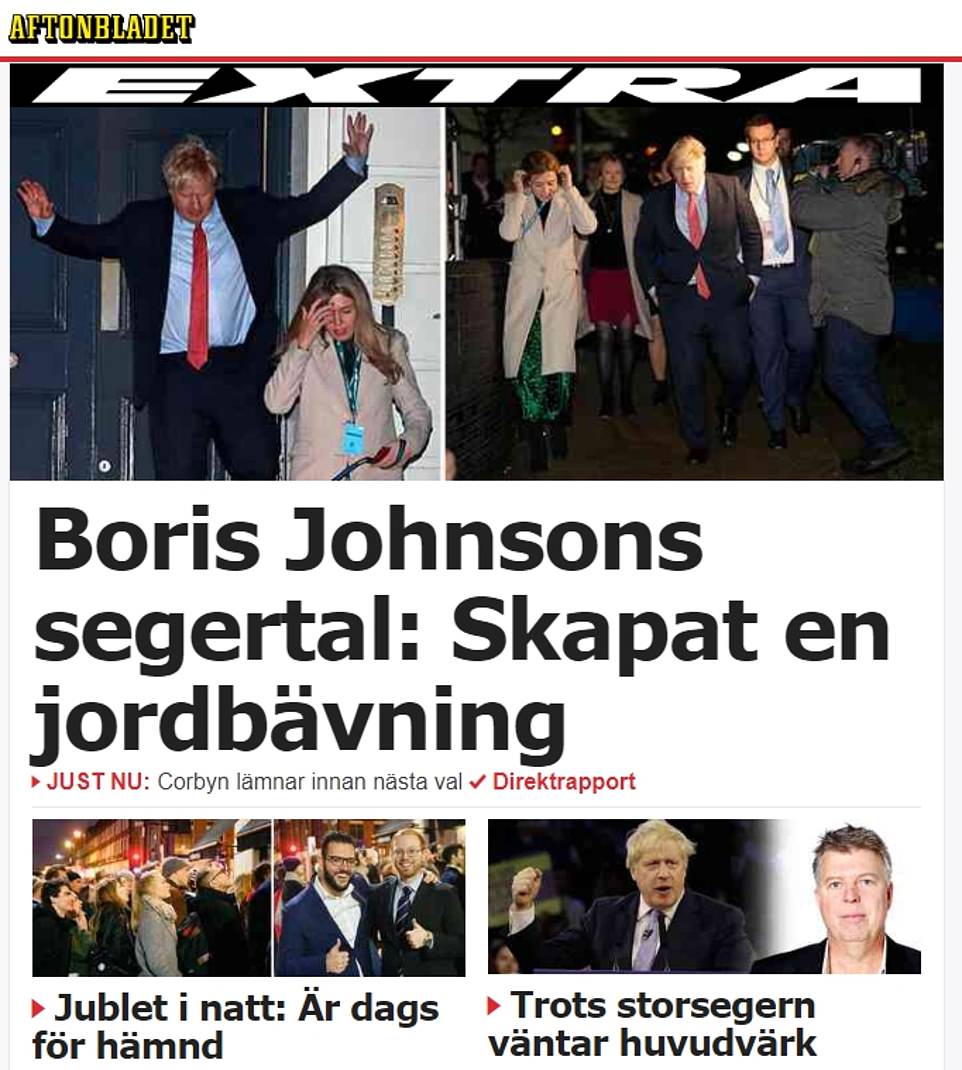 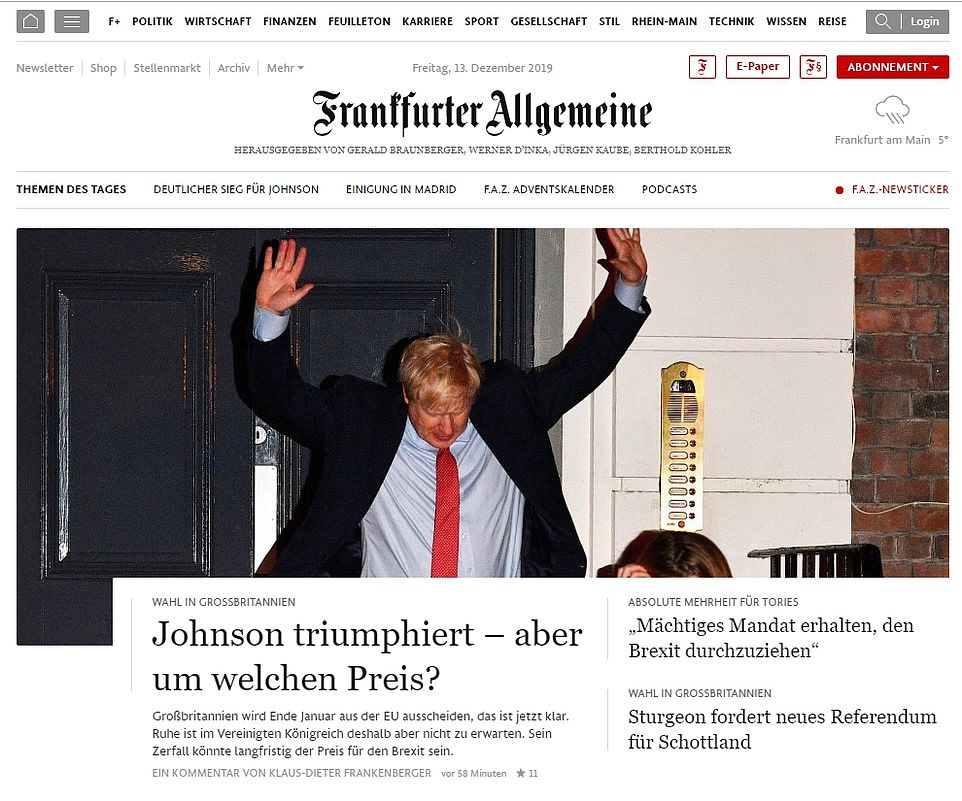 In its main piece the Frankfurter Allgemeine Zeitung wrote: ‘Johnson triumphs – but at what price?’ 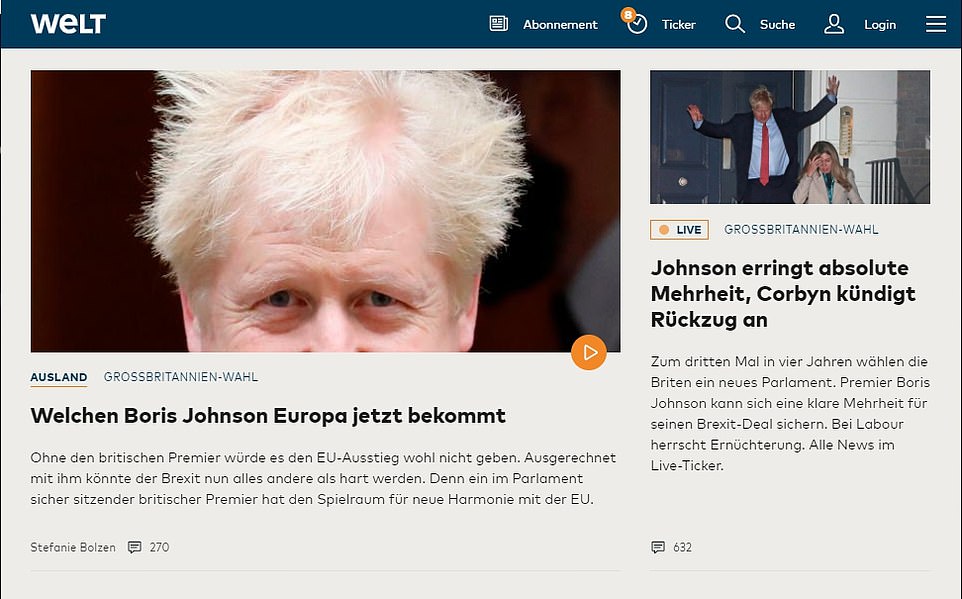 German national newspaper Die Welt wrote a stinging rebuke of the Prime Minister, saying: ‘They all know Johnson, his loose handling of the truth as well as his boundless ambition and opportunism’ 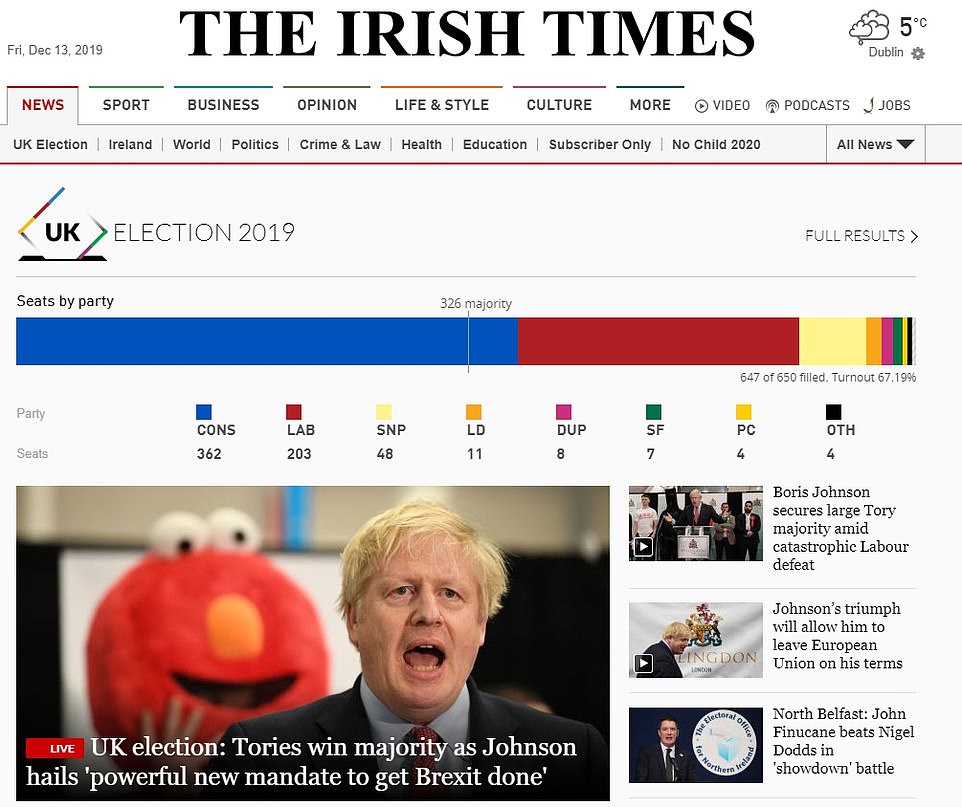 The Irish Times spoke of Boris Johnson’s triumph allowing him to leave the EU on his own terms and of the key battleground in North Belfast where Sinn Féin’s John Finucane beating the from DUP deputy leader Nigel Dodds. Dodds had held the seat since 2001 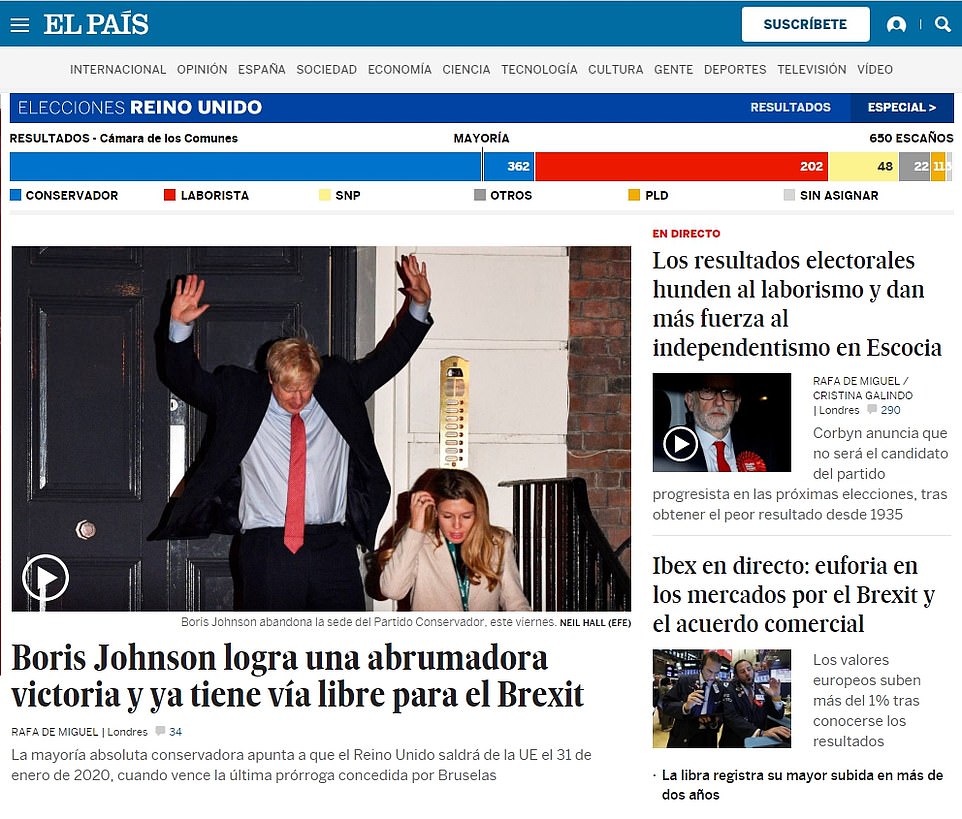 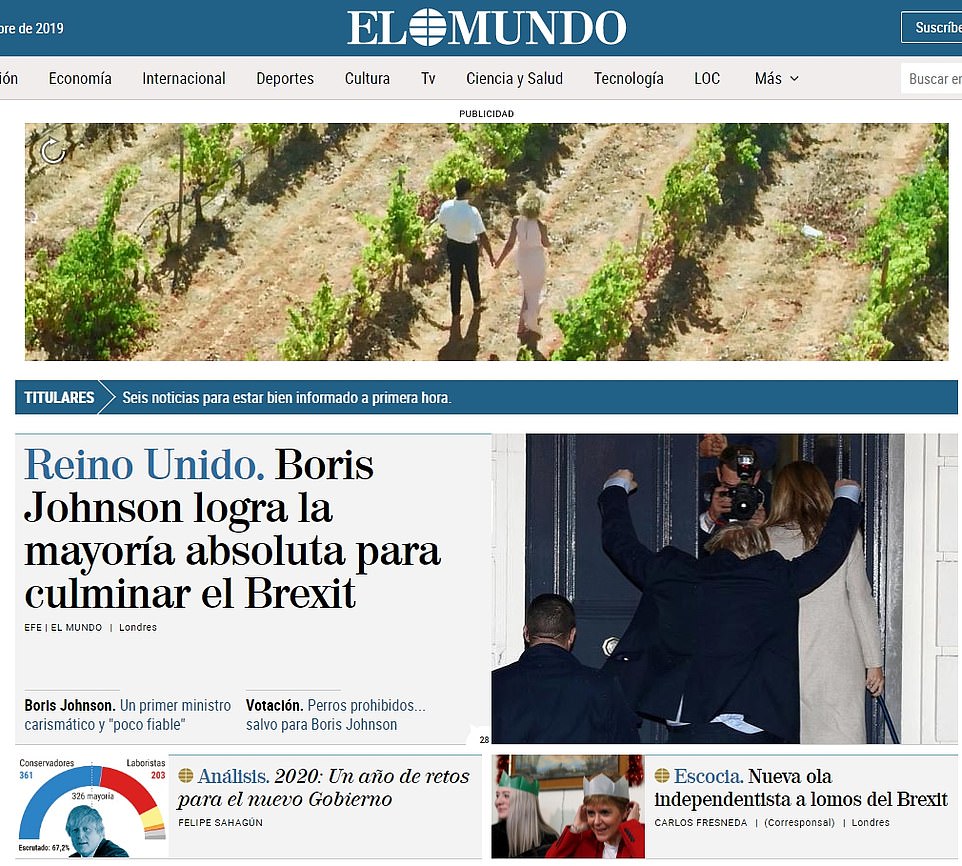 Spanish daily El Mundo wrote on its website: ‘United Kingdom. Boris Johnson achieves the absolute majority to complete Brexit.’ And in separate pieces below they questioned the Prime Minister, a charismatic but ‘unreliable’ figure 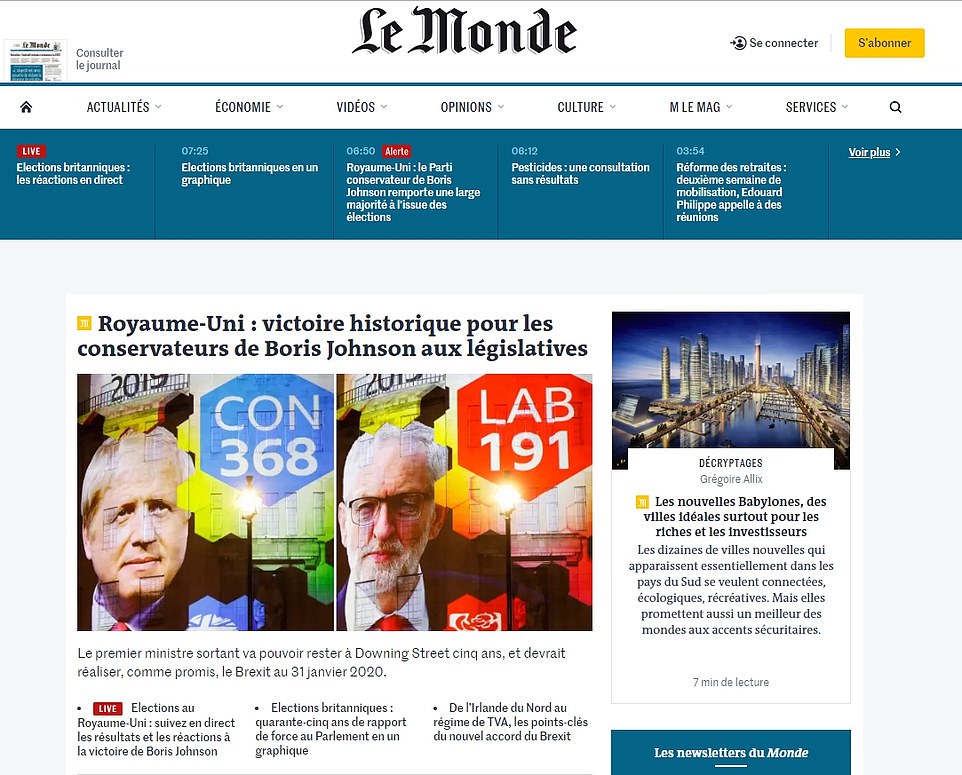 In its main piece Le Monde’s said: ‘Johnson masterfully succeeds, Corbyn endures a debacle, the lessons of a historic vote in the UK’ 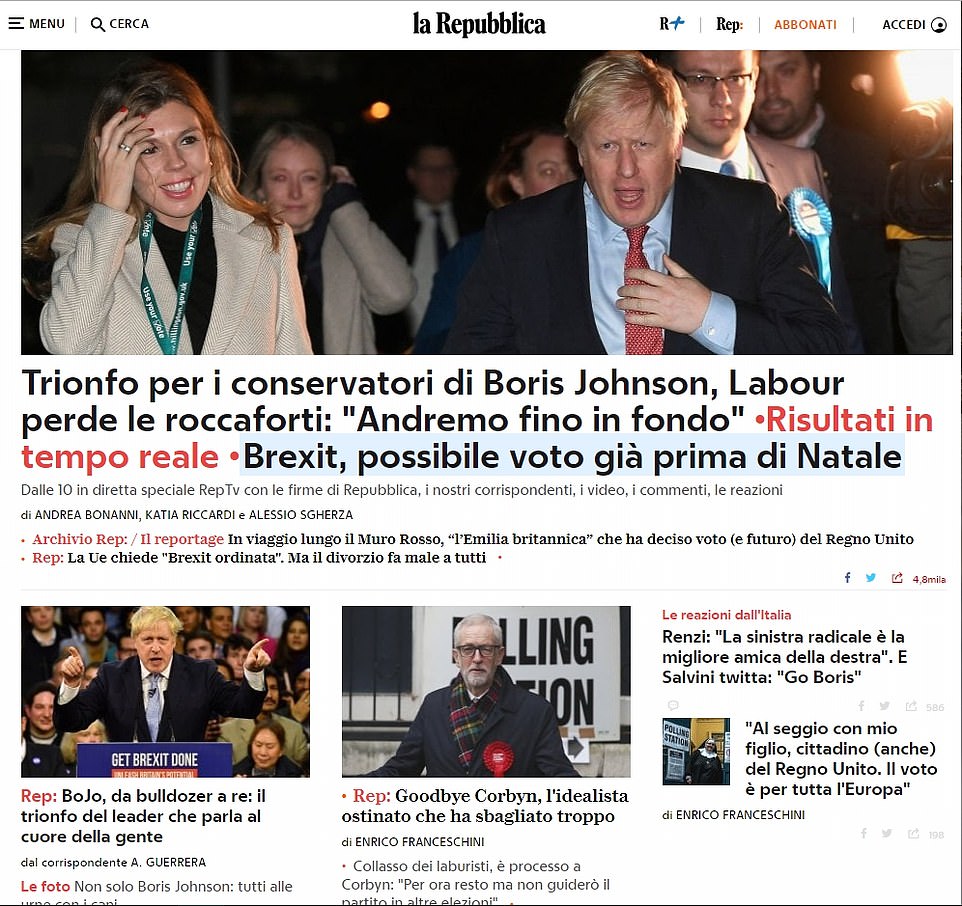 On its website La Repubblica went with: ‘Triumph for Boris Johnson’s Conservatives: “On January 31 we will be out of the EU without ifs and buts”. Labour collapses Brexit Results, possible vote for the Municipalities by Christmas’ 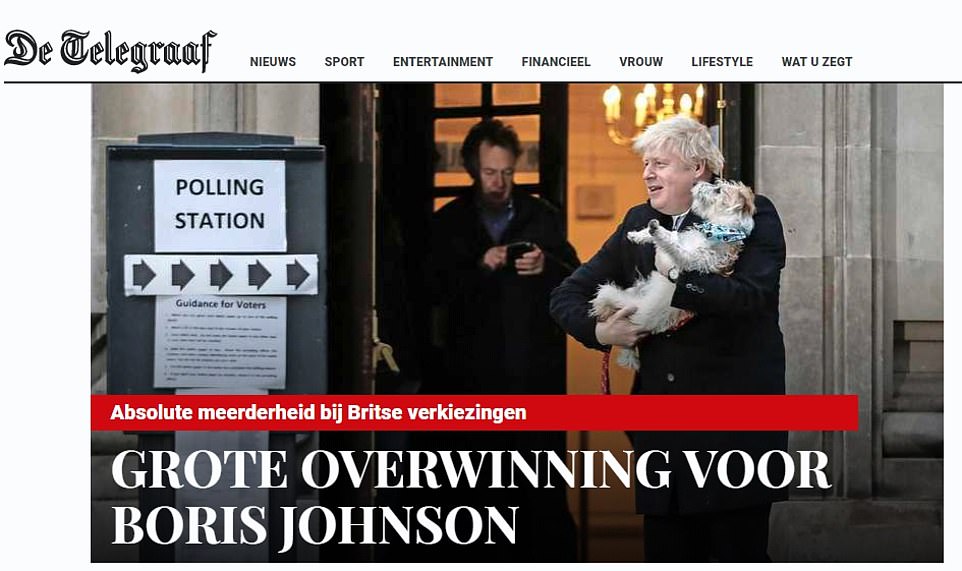