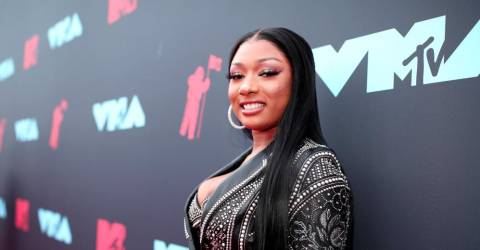 MEGAN THEE STALLION was not physically present at the American Music Awards yesterday night. Although the Savage rapper won three trophies, she was nowhere to be seen at the ceremony.

However, the 26-year-old did explain her absence on Twitter before the event.

She wrote: “I was so excited to go to the @AMAs and perform with @BTS_official, but due to an unexpected personal matter, I can no longer attend.”

The rapper continued to express her desire to perform with the Korean group.

“I’m so sad! I really can’t wait to hit the stage with my guys and perform #BTS_Butter real soon!”

While the reason was not disclosed, fans believed it was related to the recent passing of her close friend Young Dolph.

While Megan could not share the stage with BTS, the Korean group ended up performing their hit single My Universe with Coldplay instead. The group even took home the event’s highest honour, Artist of the Year.

“Thank you, AMAs! We are truly honoured to be on this stage with such amazing and tremendous artistes right over here. We are so honoured,” said the leader of the group, RM. He concluded his acceptance speech by thanking the fans.

“This whole thing is a miracle. Seriously, we will never take this for granted. Thank you so much. We want to give this honour to you guys!”

Speaking of the group, BTS was recently seen attending the Harry Styles concert in Los Angeles. The boys had a great time singing along to Styles’ music with both Lizzo and SZA.

The official BTS Twitter account posted three photos of members V, Jungkook, Jimin, and J-Hope posing beside Lizzo. The post was accompanied by the caption: “We met @lizzo” along with the heart-eye emoji.

Lizzo also shared the same images on her account with four additional selfies with the four members. She captioned the post: “Me & my besties.”

After posing the pictures, both artistes went on to follow each other on social media.