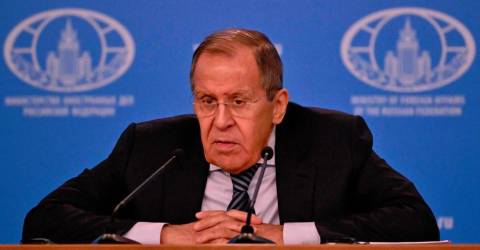 MOSCOW: Russian Foreign Minister Sergei Lavrov said on Wednesday that the United States was attempting to “contain” both Russia and China with the help of other countries, but they were alert to its “games”.

Lavrov told a news conference that the West saw both countries as a threat – Russia right now, and China in the longer term as a systemic rival.

He said Washington was not powerful enough to keep in check both countries at once, so was mobilising Europe, Japan and others to join it.

At the same time, he said, the West was trying to drive a wedge between Russia and China. “The West is trying to sow discord in our relations…We and China see all these games,“ he said.

His comments underlined the strategic importance to Moscow of its relationship with China at a time when its army is struggling in Ukraine and its economic links with the West have been wrecked by successive waves of sanctions.

Ties with Beijing had never been stronger, Lavrov said, and the two countries were shifting an increasing amount of their trade into their national currencies to reduce dependence on the West and exposure to sanctions.

Russia and China signed a “no limits” partnership last February, and their economic links have boomed as Russia’s connections with the West have shrivelled.

However, Russian President Vladimir Putin has publicly acknowledged that Chinese President Xi Jinping has “concerns” over Russia’s actions in Ukraine.

Lavrov said the West was looking for more and more ways to annoy China.

“They have already outlined their positions on Taiwan, which are absolutely unacceptable for China and for international law, they are looking for more and more opportunities to irritate China in Tibet, Xinjiang, and Hong Kong,“ he said.

“Therefore, China is well aware that remaining in the Western system and completely dependent on the West is fraught with very serious risks for the fundamental national interests of China’s development.” – Reuters