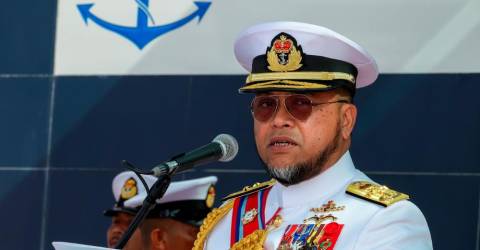 PENGERANG: The construction of the littoral combat ships (LCS) is expected to resume early next year after the completion of the mobilisation process at the end of this year, said Navy Chief Admiral Tan Sri Mohd Reza Mohd Sany (pix).

He said the LCS project is still in the mobilisation phase which is expected to be completed by the end of December.

“As far as I know, negotiations with original equipment manufacturers (OEMs) and vendors are going well,” he told reporters after the passing-out parade of the Royal Malaysian Navy (RMN) recruits in Tanjung Pengelih here today.

He said the mobilisation phase that started last June involved Boustead Naval Shipyard Sdn Bhd which carried out negotiations with the OEM to start the construction works when the phase ended.

Mohd Reza said the company had completed the negotiation process and currently presenting the results of the negotiations to the project monitoring committee which is jointly chaired by the secretaries-general of the Treasury and Defence Ministry before being presented to the Cabinet.

Previously, Defence Minister Datuk Seri Hishammuddin Tun Hussein was reported to have said that the first LCS ship is expected to be completed at least within two years.

On the proposal to upgrade the new generation patrol vessel (NGPV), Mohd Reza explained that some of the systems in the six vessels that were built 10 years ago are already obsolete or worn out and spare parts cannot be obtained in the market.

“The time has come for us to change the systems on this ship to new systems such as sensor systems and weapon systems. However, all these processes are subject to the provisions provided,“ he said.

He said that not only NGPV, but most RMN assets really need to be upgraded and new procurement is needed because some of them are over 40 to 50 years old.

“Therefore, the procurement of new RMN ships is very critical to produce competent navy people. Any planning should be based on allocations,“ he said.-Bernama