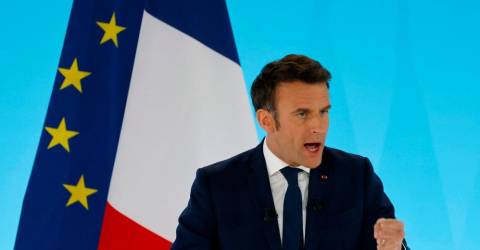 PARIS: French President Emmanuel Macron and his far-right rival Marine Le Pen were on Monday preparing for two weeks of tough campaigning after they reached a run-off of presidential elections that promises to be far tighter than their encounter five years ago.

With more than 90 percent of the vote counted in the first round, projections showed Macron scoring 28-29 percent, with Le Pen on 22-24 percent.

As the top two finishers, they will progress to a second round on April 24.

Despite entering the campaign late and holding just one rally, Macron performed slightly better than expected and won immediate support from most of his defeated rivals ahead of the run-off.

“Make no mistake: nothing is decided,“ he told cheering supporters at his campaign headquarters. “The debate that we are going to have over the next fortnight will be decisive for our country and Europe.”

He added: “When the far-right with all its forms is so high in our country, you can’t say that things are going well.”

Far-left candidate Jean-Luc Melenchon came close to qualifying for the second round after a late surge gave him a projected score of around 21 percent.

The candidates for France’s traditional parties of government — the Socialists and the Republicans — were meanwhile on course for humiliating defeats and historic low scores.

Final results are expected Monday, while four new polls on Sunday night suggested a tight second round between Macron and Le Pen.

One by the Ifop-Fiducial group suggested Macron had a razor-thin winning margin of 51 versus 49 percent, but the average of them indicated a Macron victory by around 53 percent to 47 percent.

Macron announced Sunday night that he would be out campaigning on Monday in northern France, while Le Pen is set to meet her campaign team before resuming her months-long grassroots efforts in small towns and rural France later in the week.

Bidding to be France’s first woman president, Le Pen increased her first-round score from 2017 and she will pick up votes cast for her far-right rival Eric Zemmour in the second round.

Zemmour, an anti-Islam newcomer who failed in his bid to outflank Le Pen with a more radical programme, was projected to win around 7.0 percent.

Le Pen, 53, said the run-off would present “a fundamental choice between two visions” with Macron representing “division, injustice and disorder… to the benefit of a few” against her plan for “social justice and protection” guaranteed by the nation state.

It would be a “choice of society and even of civilisation”, she said.

The election campaign has been overshadowed by the war in Ukraine, while surging prices of everyday goods have made the cost of living the overwhelming priority issue for voters.

The outcome of the two-stage election will have major implications for the European Union, which Le Pen says she wants to radically reform.

She has also said she wants to pull out of the joint military command of the US-led NATO military alliance.

Macron said Sunday: “I want a France that places itself in a strong Europe, that continues to form alliances with the world’s democracies to defend itself.

“Not a France which, once out of Europe, would only have the international alliance of populists and xenophobes as allies. That’s not us.”

A pivotal moment in the next stage of the campaign will come on April 20 when the two candidates are set to take part in a TV debate broadcast live on national television and watched by millions.

The final debate often has a crucial impact on the overall outcome, including in 2017 when Macron was widely seen as bettering a flustered Le Pen.

While her opponents accuse her of being divisive and racist, Le Pen has sought to project a more moderate image in this campaign and has focused on voters’ daily worries over inflation.

But Macron is expected to target her past proximity with Russian leader Vladimir Putin, her policies on the EU, as well as the cost of her economic programme that includes massive tax cuts.

He also floated the idea Sunday night of a “large movement of political unity and action” and a “new method” of governing, which could see him invite rival parties to formally join his political movement.

Among the other candidates, Sunday’s vote spelled humiliation for Socialist Anne Hidalgo, the mayor of Paris, who was projected to win 1.8-2.0 percent, a historic low for the party which held the presidency just five years ago.

The vote for the right-wing Republicans party, headed by nominee Valerie Pecresse, also collapsed to an estimated 4.3-5 percent, down from 20 percent in 2017.

“The traditional parties have been smashed,“ said Jerome Jaffre, a political scientist at Sciences Po university in Paris.

Greens candidate Yannick Jadot was also left disappointed with a projected score of under 5.0 percent.

This marks the third time that a far-right candidate has made the run-off vote of a French presidential election, after Marine Le Pen’s campaign in 2017 and the breakthrough by her father Jean-Marie in 2002 that shocked France.

Macron, who came to power aged 39 as France’s youngest president, is bidding to be the first French president to win a second term since Jacques Chirac in 2002.

If he does, he would have five more years to push through reforms that would include raising the pension age to 65 from 62 and enacting further tax cuts for businesses in a bid to further reduce unemployment, currently at a 14-year low.

He would also seek to consolidate his position as the most influential leader in Europe after the departure of German chancellor Angela Merkel. – AFP