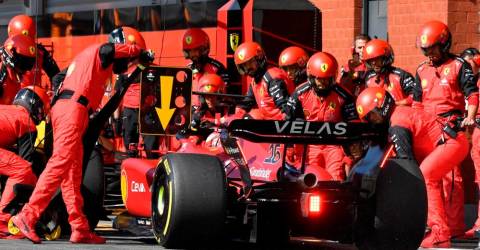 Leclerc, a 24-year-old Monegasque dropped to third behind Verstappen and his Red Bull team-mate Sergio ‘Checo’ Perez in the world championship after picking up a late five-second penalty for speeding in the pitlane.

He said that was the least of his worries as he reflected on a race in which Red Bull had given a masterclass, recording consistently faster lap times on their way to a dominant one-two finish.

“At the end, it’s more frustrating to see the delta of pace there was between Red Bull and us, which is the thing we need to work on,“ he said.

“If you look at Red Bull, they were on another level, and they found something this weekend that is a bit worrying for us.”

He added that his title hopes were remote but refused to give up hope.

“It’s definitely looking extremely difficult now, and we don’t exactly understand it. They are extremely quick on the straights. It looks like they have no downforce, but then they get into a corner and they are as quick, or quicker, than us.”

Team-mate Carlos Sainz, who finished third behind the two Red Bulls after starting from pole position, said that tyre wear was the main issue for Ferrari.

“Unfortunately, it was harder than expected,“ he said. “We got a good start. I got a good restart after the safety car, but the pace was just not there.

“We had a lot of overheating on the tyres, we were sliding around a lot.”

“Red Bull, Max and Checo were in a league of their own today and, unfortunately, we couldn’t put up a stronger fight and we had to survive.

“We have to learn why we were not so competitive at this track.” – AFP