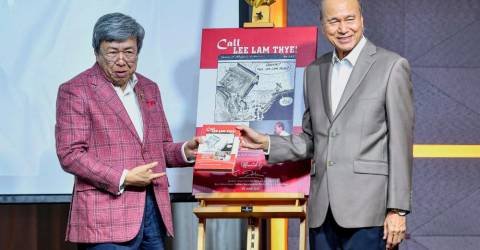 KUALA LUMPUR: Social activist Tan Sri Lee Lam Thye hopes the biography on him will inspire more Malaysians to prioritise the rakyat (people) and help them in any way they can.

Lee, 76, said he would consider the effort to produce the biography titled ‘Call Lee Lam Thye- Recalling a Lifetime of Service’ a worthwhile venture if the book can encourage and motivate people to serve in any capacity.

He also hoped the book would help to underscore the importance of service to the people and nation through his own personal experiences in public office and various organisations.

“This is especially so now when we increasingly see how personal interests and ambition often override “service” even among those specially elected to serve the people.

“ I hope it will, at the very least , be a reminder for those who serve the people to be accountable as we are all only as good as our word,” he said in his speech during the book launching event here, today.

The biography on Lee was launched by the Sultan of Selangor, Sultan Sharafuddin Idris Shah.

Lee also highlighted his three significant events that deserved mention throughout over 50 years of public life including elections, of contesting for state assemblyman for Bukit Nenas in 1969, Member of Parliament for Bukit Bintang in 1974 and political retirement announcement in 1990.

He had also pledged to serve the people and the country by serving in various non-govermental organisations (NGOs) although his political career ended in 1990.

The book which is published in three languages (Malay, English and Mandarin) was authored by journalists Sofeah Chok Suat and P. Selvarani.

Among the interesting parts in the book is the reason for Lee’s exit from politics just a few weeks shy of the 1990 General Election. — Bernama