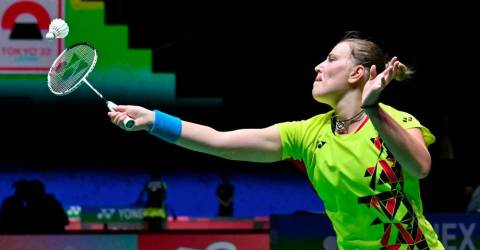 TOKYO: Ukrainian badminton player Maria Ulitina has been living in Hungary since Russia invaded her country and says focusing on matches is “really hard when you don’t have a home”.

The world number 58 drove for four straight days to reach the Hungarian border when Russian missiles started firing over her home in the eastern Ukrainian city of Dnipro in February.

Six months later she is still living in exile and said the situation is now taking a serious toll on her mental health.

“I don’t want to complain about it but mentally it’s really hard when you don’t have a home and you don’t know where you will live tomorrow,“ the 30-year-old told AFP at badminton’s world championships in Tokyo on Tuesday.

Ulitina had previously lived in Hungary so she had residence permission for herself and her dog when she fled the war in her homeland with the bare minimum of possessions.

She said her training conditions and standard of living were good but “it’s hard to manage” her mental state as the war drags on.

She said her family in Ukraine were safe and they speak regularly, but she also worries that the front line of war is moving closer to them.

Ulitina has been active on the world tour this season and she made a surprise appearance at the All England Open in March, barely a week after fleeing Ukraine for Hungary.

“It happened just two or three days before the start and I had no visa or anything,“ she said.

“It’s big thanks to Badminton England that they asked the government to help so I could go.”

Ulitina said she had Russian friends in the past but she has not heard from them since the war began.

Russian badminton players have been banned from international competition and she said she “cannot even imagine” what it would be like to face one on the court.

“I used to have friends there but since the war started no one even writes or asks anything, how we are or if they are sorry about it, nothing,“ she said.

“This is really disappointing.” – AFP