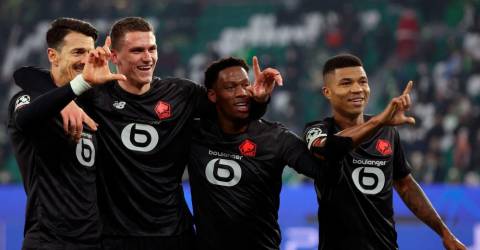 PARIS: With French football reeling this season due to repeated incidents of crowd violence, Lille’s achievement in reaching the Champions League last 16 comes as a much-needed bright spot.

While an all-star Paris Saint-Germain dominate the headlines, Lille have followed up their remarkable Ligue 1 title triumph last season by making it through to the knockout stages of Europe’s elite club competition for the first time since 2006/07.

That they did it by winning their group, while PSG only came second behind Manchester City in their section, is all the more notable.

A Champions League group also containing Red Bull Salzburg, Sevilla and Wolfsburg may not have been the toughest in the competition, but it was the most competitive.

Lille did not win any of their first three games but bounced back to win all of their final three matches, including beating Wolfsburg 3-1 in Germany on Wednesday, to top their group.

Now they will be seeded in Monday’s last-16 draw, ensuring they will avoid many of the biggest names, although holders Chelsea are among the potential opponents.

“It is the first time Lille have won their group, so it is a historic achievement,“ said coach Jocelyn Gourvennec.

“It is an important moment in the history of the club. We have done Ligue 1 proud.”

Lille won the title in May despite being burdened by big debts, and they saw inspirational manager Christophe Galtier leave for rivals Nice, while outstanding goalkeeper Mike Maignan and midfielder Boubakary Soumare were sold.

Eyebrows were raised when Gourvennec, out of management since leaving modest Guingamp after their relegation in 2019, was appointed as Galtier’s successor.

Their title defence has not got off the ground and they remain in the bottom half despite winning their last two matches.

Their European form should now provide a lift for a club that boasts France’s top scorer in Canadian hitman Jonathan David, who has 11 Ligue 1 goals and 14 in all competitions.

The only question now is whether they will be able to hold onto their best players in the January transfer window, with French international Jonathan Ikone one who could be sold.

In the meantime Lille will hope to close on the teams above them in Ligue 1 on Sunday when they face Lyon, whose own troubled start to the season was exacerbated this week when they were docked a point.

That was a punishment after their game against Marseille last month was abandoned when Dimitri Payet was struck on the head by a bottle, the latest trouble to hit a Ligue 1 fixture this season.

The match will be replayed from the start behind closed doors at a later date. – AFP