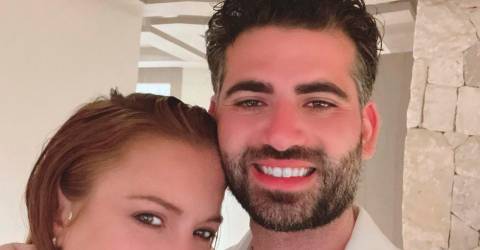 FANS of actress Lindsay Lohan were blindsided over the weekend when she appeared to hint that she had gotten married.

Lohan, 36, announced her engagement to financier Bader Shammas last November with a post on Instagram, sharing photos of the couple smiling and showing off her new ring. Her caption simply referred to him as “My life. My Love.”

While scant information has been released about the couple, it is believed that Lohan first met the US-educated Shamass in Dubai, where Lohan had been living in recent years.

On Friday, however, Lohan shared a photo of herself and Shammas on Instagram, with the caption: “I am the luckiest woman in the world. You found me and knew that I wanted to find happiness and grace, all at the same time. I am stunned that you are my husband. My life and my everything.”

She then added: “Every woman should feel like this every day.”

This caused fans to wonder if the two had secretly gotten married, and they immediately began flooding Lohan’s comments with messages of congratulations.

So far neither Lohan nor her representatives have confirmed the nuptials have taken place. However, a secret wedding would be in line with Lohan’s own desire to keep her personal life as private as possible.

In February, Lohan had said in an interview with Extra that she envisioned herself as a “low-key” bride.