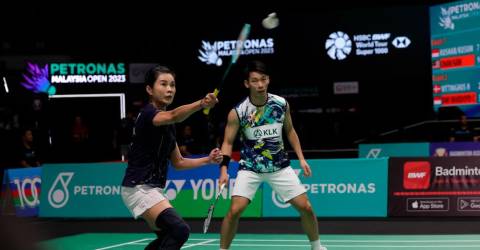 The match at the Axiata Arena today was the last one for the Rio 2016 Olympic silver medallist, who had been involved in the sport since she was 13.

The glamorous poster girl of Malaysian badminton, Liu Ying, 34, who was reunited with Peng Soon in this Super 1000 tournament, bowed out 21-18, 15-21, 7-21 to the Indonesian pair of Rehan Naufal Kusharjanto-Lisa Ayu Kusumawati in 58 minutes.

Speaking to reporters after the match, Liu Ying said she was looking forward to at least marking a win in front of her legion of fans in the country, but she was enamoured to hear the thunderous cheering from fans throughout the game.

“Before the match, I thought if possible, I would like to record a win, which would be a bonus if I could do it with Peng Soon.

“Despite losing, I think this is a memory I will never forget because I was able to play in the Malaysia Open with Peng Soon. I hope that after this, my fans will miss catching a glimpse of me and Peng Soon on the court,” said a teary Liu Ying.

She also recorded a token of appreciation to all parties at large who supported her throughout her career.

The 2023 Malaysia Open was a meaningful curtains-down as the same tournament saw her launch her partnership on the court with Peng Soon 13 years ago.

Peng Soon will continue to play as a professional mixed doubles player with Cheah Yee See.

The pair ranked 147th in the world, will next face Indonesians Rehan Naufal-Lisa Ayu (world number 12).

“This court is quite tricky, if you hit hard it’s easy to go out so our strategy is to control the shuttle, I do my best in front and actually our coach (Nova Widianto) drummed in quite a lot of strategy, so we really appreciate it,” said Ee Wei. – Bernama