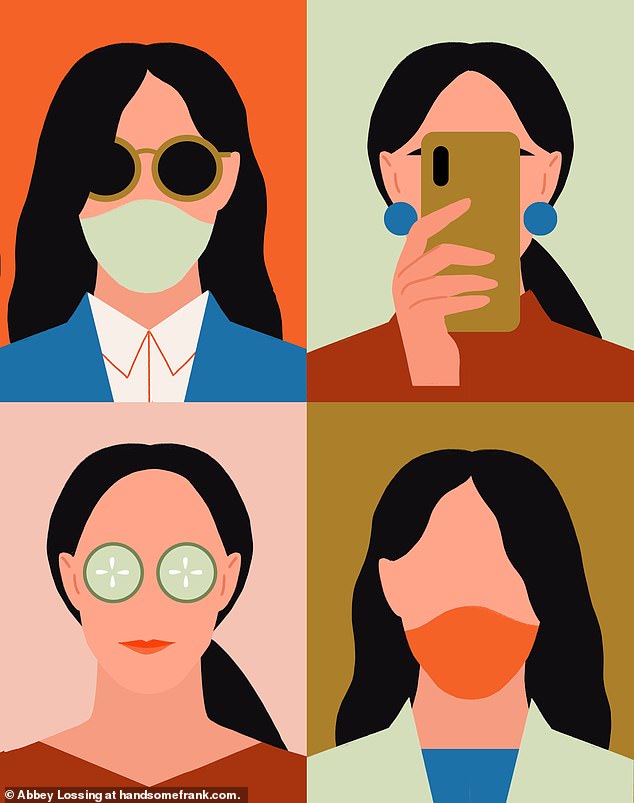 My face is important: it’s the only body part he will be talking to

Honestly. Me telling a potential date that spas have opened their doors is tantamount to me saying I have, too. Front door, back door, windows.

Him. ‘I haven’t forgotten about our lunch. I should be going north to see friends in about five weeks’ time. As much as I love my car [it’s a Maserati], I’m not looking forward to the drive.

I haven’t forgotten I promised you a gift from our website.’ Hmmm. Five weeks. If I visit a spa now, everything on my body will have dried out as though it’s a hanging basket, or bolted to seed like parsley left untended when you go away.

And what on earth to wear? What would give off the right vibes? My friend Andrea in Belfast managed to get my address off my assistant Nic, and has just sent me an oversized Bella Freud white T-shirt with the slogan ‘These shoes are: Uber. Sit down. Uber only’. Which pretty much sums me up. Or used to, given I’ve spent the past decade in wellies. I’m thinking of layering it under an Alexander Wang slouchy blazer, teamed with toothpick jeans that give me deep vein thrombosis.

Reason? I’m starting to think I was too hasty rejecting him before for being short. I’ve been watching Married at First Sight Australia and marvelling not just at so much footage of Nige, aka the photographer Hunk* (Series 4, Episode 5, 44 minutes in, if you’re remotely curious), but also at how ridiculous it is for the potential brides to turn up their noses at perfectly handsome, young, fit grooms who know how to start a lawnmower just because they’re not 6ft 2in.

Maybe I am too fussy. An acquaintance’s partner is facing jail for fraud. Andrea texted: ‘I bet you’re now thinking David’s ponytail wasn’t so bad, after all.’

Then David, who doesn’t follow the news unless it’s about me, texted to say, ‘I don’t look so bad now, do I?’

I think we are setting a bit of a low bar here.

Then I had a brainwave. Google! Yes! I didn’t train as an investigative reporter for nothing! So I googled the new man, P. I discovered his age (three years older than me), a photo of his house (not a s***hole, overlooking the sea**), and a photo of him ‘at work’. I sent the photo to Nic.

‘Doesn’t look too bad at all.’

Anyway, then I got some bad news. I emailed the medi-spa nearest to me and was told, ‘We can book you in for treatments for the scalp and from the neck down. Facials and any treatments on the face remain off limits.’ ***

Um, excuse me? My face is the most important bit! That’s the ONLY body part he will be talking to as it’s a FIRST DATE (if you don’t count meeting twice for drinks years ago). How come I am allowed to go to the dentist (for a deep clean; already booked; receding gumlines are such a giveaway – I wonder if I can have them lifted as well as my face?) but not get my eyebrows threaded and my lashes dyed and extended? You can tell it is only men making decisions at the top. What is wrong with Carrie? Can she not pipe up? Does she have a postpartum moustache? Does she?

*I wonder if putting a flight to Sydney on expenses would be a bridge too far… My managing editor once nearly had a heart attack when I put ‘two Herdwick sheep, destined for ritual slaughter’ alongside my mobile phone bill and stamps for readers’ letters. I think the receipt is framed on the wall of his office.

**And within two miles of a Waitrose.

***I wrote this before BJ announced spas could open fully, along with our legs, for Hollywoods, threading, etc.

I am currently on hold to the medi spa. I could be some time…

Join Liz as she dissects her weekly You Diary, delves into the archives and screams, ‘Why did I write that?!’ Find it now at mailplus.co.uk/lizjones, iTunes and Spotify.