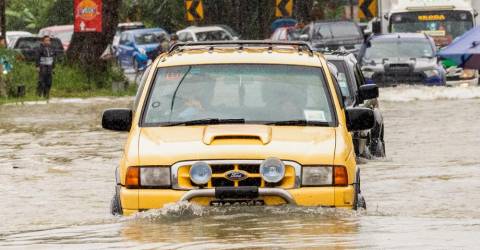 PUTRAJAYA: The Local Government Development Ministry (KPKT) has called on local authorities to step up efforts in maintaining the drainage system to reduce the risk of flash floods during the Northeast Monsoon (MTL) season prevailing in the country now.

KPKT in a statement today told local authorities to identify areas of ditches, drains, sewers and reservoirs that are at risk of causing flooding and to carry out cleaning works at the affected locations for a smoother flow of rainwater.

“PBT has been asked to intensify the implementation of proactive measures to reduce the risk of flash floods during MTL,“ according to the statement.

Nga also urged local authorities to ensure that their personnel, facilities, equipment and machinery are always ready to face any possible flood.

“For the people’s well-being, this proactive action can reduce the risk of flooding more effectively,“ he said.

According to the Malaysian Meteorological Department (MET Malaysia), the second wave of the Northeast Monsoon which is expected to occur until next Wednesday (Dec 21) will have an impact in high risk areas including flash floods in cities. -Bernama