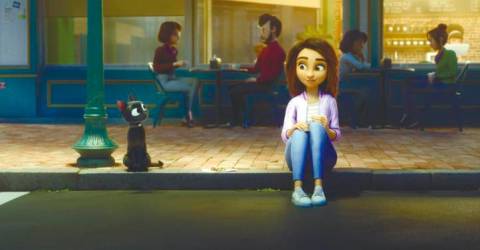 THE animated film Luck, which began streaming on AppleTV last month, is about Samantha Greenfield, or Sam (voiced by Eva Noblezada ) a girl who grows up in an orphanage, The Coleman House. Sadly, Sam has yet to be fostered, or taken in by a forever family.

Sam constantly has bad luck. When she turns 18, she has to leave the orphanage to live on her own, but she is not ready to do so. Hazel, (Adelynn Spoon), a young orphan with whom Sam is close, often wishes Sam would find a lucky penny as it brings good luck.

On the first day in her own apartment, Sam gets up late, gets locked in her bathroom, her toasters do not work, and everything goes wrong from the time she leaves the house, all the way to her work place.

After work, she visits Hazel to learn that her adoptive parents never showed up. Sam knows that it is hard to find families, especially for older children.

While still going through a run of bad luck, Sam shares a piece of bread with a hungry black cat on the street, and talks to the cat about her own problems. After a while, the cat runs away, but Sam finds a lucky penny on the ground, and her luck changes almost immediately.

One day, Sam loses the penny after it gets flushed down the toilet accidentally. A desperate Sam goes back to the same place to look for another penny to give to Hazel, to give her some luck as she is meant to meet a new set of prospective parents.

Instead of the penny, she finds the same cat, searching for something. She realised that the penny had dropped from the cat’s collar.

Sam gives chase as she wants another lucky penny, and follows the black cat into a portal and accidentally arrives at the Land of Luck, where good luck and bad luck are manufactured.

She searches for the black cat, whose name is Bob (Simon Pegg). The cat needs the ‘travel coin’ to enter into the Land of Luck,but Sam wants it for Hazel, and so they make a pact to get a coin.

Sam disguises herself as “the tallest leprechaun from Latvia”, and sneaks into the land, where she meets a whole host of magical creatures.

In the Land of Luck, Sam continues to fail in every attempt, causing their plans to keep on changing. These diversions from the original plan make the story seems never-ending.

Interestingly, the cat reminds Sam of her pure goodness and that she embarks on a journey to do good things for others and was willing to go through bad luck for others.

In short, the story is all about Sam learning that there is a bright side to every bad situation. There is something right in all the wrong situations, because bad luck led her to meet Hazel and find new friends. The lesson is in the way one perceives bad luck.

Produced by Skydance Animations, the visuals for Luck are bright and appealing, and the Land of Luck looks magical with all kinds of animals like pigs in pink suits and colourful insects, and each has a role in the land.

Travelling in the sky looks like a theme park ride, but there is nothing really exciting about the good luck and bad luck creating process and how it is targeted to specific people.

The animation boasts a line-up of famous people giving voices for the characters. Among others, Jane Fonda voices Babe the Dragon, Whoopi Goldberg is the Captain, and the most fascinating character is Bob, who is voiced by Pegg, a renowned character and voice actor. His voice perfectly matched the mischievous personality of the cat and he speaks in Scottish accent.

The animation is entertaining, for children, but perhaps not for all adults. Children would enjoy this, especially because of all the adorable animal characters, as well as the heartwarming ending.