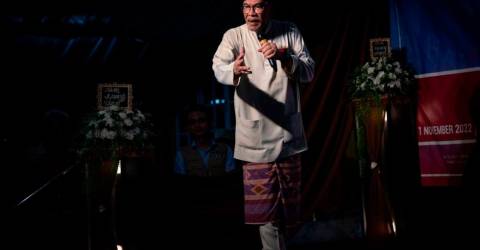 KUCHING: Pakatan Harapan (PH) will ensure the issue of Sabah dan Sarawak rights under the Malaysia Agreement 1963 (MA63) will be resolved without a lot of negotiations if given the mandate to form the Federal Government after the 15th general election (GE15).

“In stating the need for a federal system, distribution of power is a must in the constitution of the country that is considered a federation. This is not a strange issue for Sabah, Sarawak and the Peninsula.

“Collaboration between the state and federal (government) is critical. Give our candidates in Sarawak a strong voice (in parliament) to work together with the state and federal for us to defend the just cause of all Sarawakians,” he said in his speech at the Harapan Offer For Sarawak event here today.

At a media conference after the event, Anwar said any discussion to cooperate with Gabungan Parti Sarawak (GPS) at the federal level will be held after the GE15 results.

Anwar said PH wanted a strong partnership not only with GPS, but also all state governments, including those still administered by PAS.

Meanwhile, DAP Sarawak chairman Chong Chieng Jen stated that the four main principles in the offer today include empowering the regions of Sabah and Sarawak through the implementation of MA63 and the decentralisation of power to both regions.

All these aspects have been included in the GE15 Harapan Offer that was launched recently.-Bernama